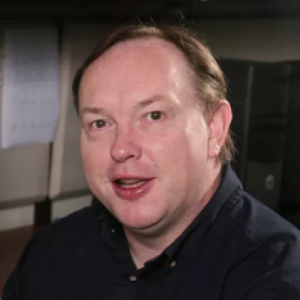 Ph.D., University of Liverpool, U.K. (advisor: Prof. Raymond J. Abraham), 1986-1989, Physical Organic Chemistry. Postdoc. Oxford University, U.K. (advisor: Prof. W. Graham Richards), 1989-1992. Joined USC in 1992. Dr. Haworth's research interests lie at the interface between chemistry, biology and the computational sciences, with the goal being an improved understanding of the dynamics of molecular association of nucleic acids and proteins. Dr. Haworth has published over 60 papers in this area, and the work has attracted funding from federal and non-federal sources.

2019 Measurement of distances between spectroscopic labels (e.g., spin labels, fluorophores) attached to specific sites of biomolecules is an important method for studying biomolecular complexes. ALLNOX (Addition of Labels and Linkers) has been developed as a program to model interlabel distances based on an input macromolecule structure. Here, we report validation of ALLNOX using measured distances between nitroxide spin labels attached to specific sites of a protein-DNA complex. The results demonstrate that ALLNOX predicts average interspin distances that matched with values measured with pairs of labels attached at the protein and/or DNA. This establishes a solid foundation for using spin labeling in conjunction with ALLNOX to investigate complexes without high-resolution structures. With its high degree of flexibility for the label or the target biomolecule, ALLNOX provides a useful tool for investigating the structure-function relationship in a large variety of biological molecules.

2018 When medicinal chemists need to improve oral bioavailability (%F) during lead optimization, they systematically modify compound properties mainly based on their own experience and general rules of thumb. However, at least a dozen properties can influence %F, and the difficulty of multiparameter optimization for such complex nonlinear processes grows combinatorially with the number of variables. Furthermore, strategies can be in conflict. For example, adding a polar or charged group will generally increase solubility but decrease permeability. Identifying the 2 or 3 properties that most influence %F for a given compound series would make %F optimization much more efficient. We previously reported an adaptation of physiologically based pharmacokinetic (PBPK) simulations to predict %F for lead series from purely computational inputs within a 2-fold average error. Here, we run thousands of such simulations to generate a comprehensive "bioavailability landscape" for each series. A key innovation was recognition that the large and variable number of p K's in drug molecules could be replaced by just the two straddling the isoelectric point. Another was use of the ZINC database to cull out chemically inaccessible regions of property space. A quadratic partial least squares regression (PLS) accurately fits a continuous surface to these thousands of bioavailability predictions. The PLS coefficients indicate the globally sensitive compound properties. The PLS surface also displays the %F landscape in these sensitive properties locally around compounds of particular interest. Finally, being quick to calculate, the PLS equation can be combined with models for activity and other properties for multiobjective lead optimization.

Enhancement of Curcumin Bioavailability Via the Prodrug Approach: Challenges and Prospects

2017 Curcumin is a natural product with many interesting pharmacological properties. However, these are offset by the particularly poor biopharmaceutical properties. The oral bioavailability of curcumin in humans is very low, mainly due to low solubility, poor stability, and extensive metabolism. This has led to multiple approaches to improve bioavailability, including administration of curcumin with metabolism inhibitors, formulation into nanoparticles, modification of the curcumin structure, and development of curcumin prodrugs. In this paper, we focus on the pharmacokinetic outcomes of these approaches. Pharmacokinetic parameters of curcumin after release from prodrugs are dependent on the linker between curcumin and the promoiety, and the release itself may depend on the physiological and enzymatic environment at the site of cleavage. This is an area in which more data are required for rational design of improved linkers. Cytotoxicity of curcumin prodrugs seems to correlate well with cellular uptake in vitro, but the in vivo relevance is uncertain. We conclude that improved experimental and theoretical models of absorption of curcumin prodrugs, development of accurate analytical methods for simultaneous measurement of plasma levels of prodrug and released curcumin, and acquisition of more pharmacokinetic data in animal models for dose prediction in humans are required to facilitate movement of curcumin prodrugs into clinical trials.

2015 Measurement of distances between spin labels using electron paramagnetic resonance with the double electron-electron resonance (DEER) technique is an important method for evaluation of biomolecular structures. Computation of interlabel distances is of value for experimental planning, validation of known structures using DEER-measured distances, and determination of theoretical data for comparison with experiment. This requires steps of building labels at two defined sites on proteins, DNA or RNA; calculation of allowable label conformers based on rotation around torsional angles; computation of pairwise interlabel distances on a per conformer basis; and calculation of an average distance between the two label ensembles. We have described and validated two programs for this purpose: NASNOX, which permits computation of distances between R5 labels on DNA or RNA; and PRONOX, which similarly computes distances between R1 labels on proteins. However, these programs are limited to a specific single label and single target types. Therefore, we have developed a program, which we refer to as ALLNOX (Addition of Labels and Linkers), which permits addition of any label to any site on any target. The main principle in the program is to break the molecular system into a "label," a "linker," and a "target." The user can upload a "label" with any chemistry, define a "linker" based on a SMILES-like string, and then define the "target" site. The flexibility of ALLNOX facilitates theoretical evaluation of labels prior to synthesis and accommodates evaluation of experimental data in biochemical complexes containing multiple molecular types.