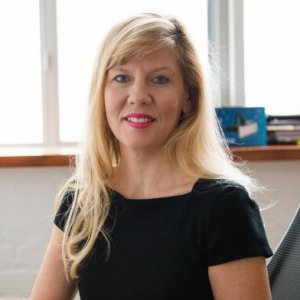 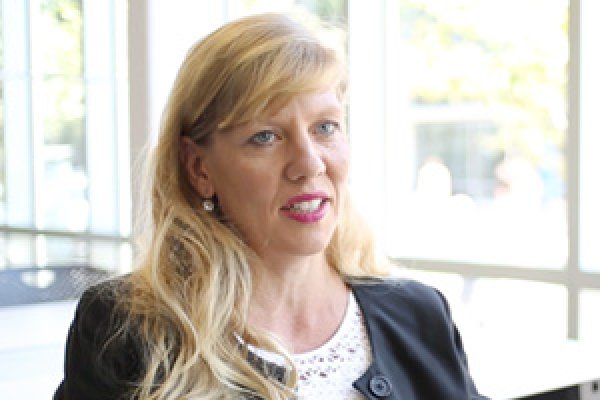 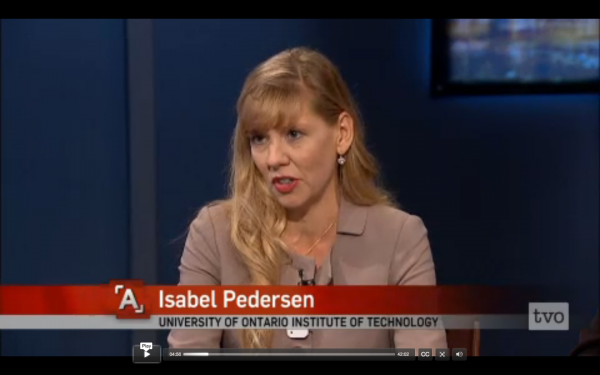 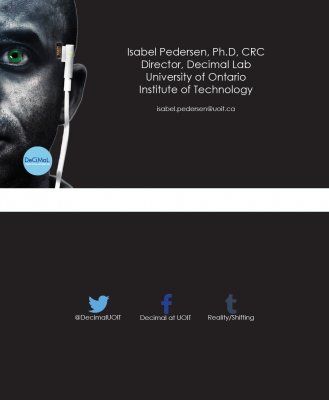 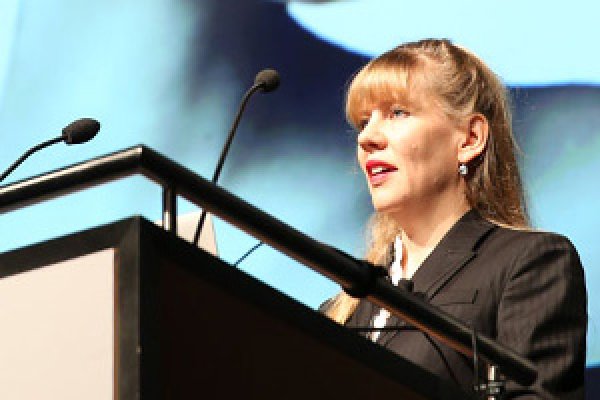 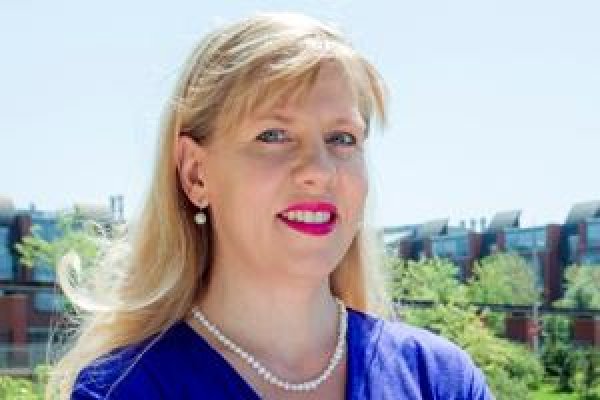 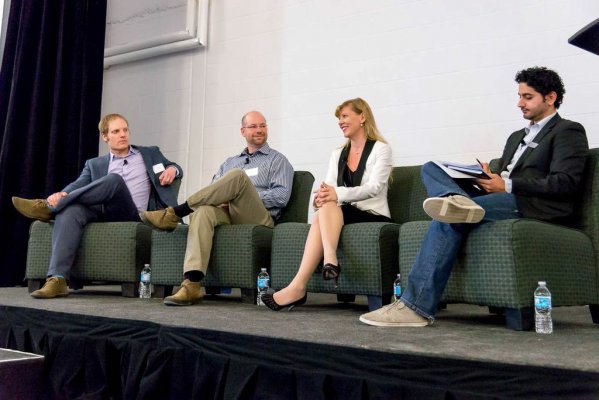 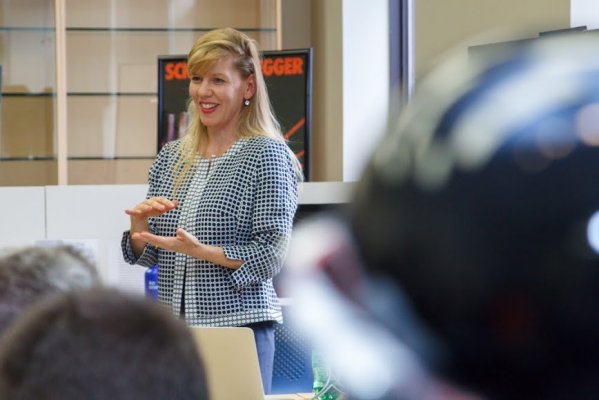 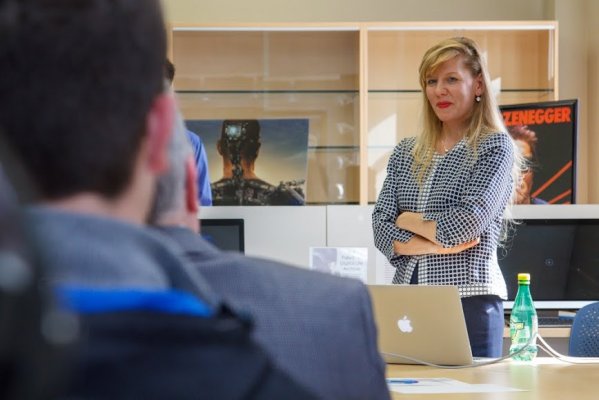 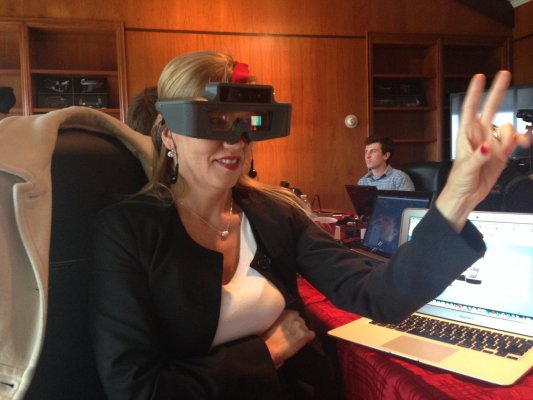 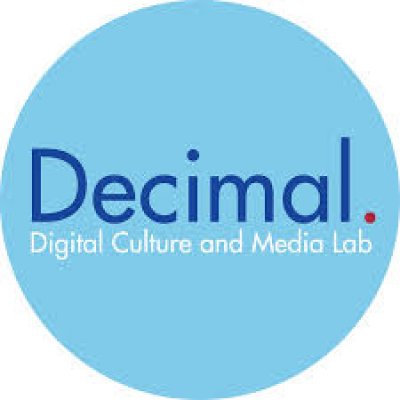 Isabel Pedersen, PhD, is immersed in the world of wearable computer devices. She addresses important questions concerning how gadgets worn on the body will shift reality for us, change how we interact with others, and participate in digital culture. As an international thought leader, Dr. Pedersen is interested in how society is persuaded to adopt these gadgets because they involve vast contexts such as popular film, traditional mythology, social media outlets, entrepreneurial adventures, consumer contexts, government ideologies, transhuman beliefs, and inventors’ writing. She concentrates on inventions promised for the future as these predictions also bear consequences for humanity in the present.

Currently, she holds funding from the Canadian Foundation for Innovation (CFI) and the Ontario Ministry of Economic Development and Innovation. She is the author of Ready to Wear: A Rhetoric of Wearable Computers and Reality-Shifting Media, and runs research out of UOIT’s Digital, Culture and Media Lab (DeCiMal).

Discourses of Science and Technology

Dr. Pedersen is named one of 91 inaugural members of the College, Canada’s first national system of multidisciplinary recognition for the emerging generation of leaders. Together, the members of the College will be in a position to provide guidance on issues of importance to Canadians, and to promote Canadian achievements in the arts, humanities and sciences around the world.

VANCOUVER — Aware that the campaigns of many aspiring politicians have derailed because of social media skeletons, first-time Vancouver city council candidate Brandon Yan thought he was doing the sensible thing when he signed up for an app that helps delete old Twitter posts.

How Augmented Reality Will Project A New World Onto Our Windshields

FLUX is a new series that explores technological innovations in mobility and how they will affect our roads, our cities and our relationship to both.

In the sixth episode of FLUX, host Anthony Morgan investigates how the automakers introducing augmented reality into vehicles must balance a desire for more real-time insights and the risk of information overload. Speaking with Dr. Isabel Pedersen, Professor at the University of Ontario Institute of Technology, we look at the influence of augmented reality, how it will change our view of the road, and whether or not this new digital interface will steer us off course.

Dr. Isabel Pedersen isn’t shy about asking uncomfortable questions when it comes to emerging technologies that can be carried, implanted, ingested or worn by humans. In fact, she’s made a career of it.

The Canada Research Chair (CRC) in Digital Life, Media and Culture has been interested in human-computer interactions since her teenage years playing Pac-Mac in the Yonge Street arcades of downtown Toronto.

The Future is Wearable

A decade ago, it would have been difficult to imagine humans tracking their health and reading text messages through wristwatches, but fitness trackers and smartwatches have gone from science fiction to real life. Wearable technologies now go beyond the wrist to glasses that help blind people see, and headbands that read brainwaves. The Agenda discusses how these gadgets are changing how humans interact with the world around them.

Why millennials have embraced the magical unicorn trend

First there was unicorn slime — shimmery lumps of colourful goop made from mixing Borax with glitter glue. Its purpose? Unclear, other than holding it in your hands and stretching it. The sparkly stuff took over online communities and DIY web pages.

Soon after came the food. Unicorn cupcakes, doughnuts, popsicles, corn on the cob, and everything else under the rainbow. And with the introduction of Starbucks’ Unicorn Frappuccino this spring, we reached peak unicorn.

Why millennials have embraced the magical unicorn trend

First there was unicorn slime — shimmery lumps of colourful goop made from mixing Borax with glitter glue. Its purpose? Unclear, other than holding it in your hands and stretching it. The sparkly stuff took over online communities and DIY web pages.

Soon after came the food. Unicorn cupcakes, doughnuts, popsicles, corn on the cob, and everything else under the rainbow. And with the introduction of Starbucks’ Unicorn Frappuccino this spring, we reached peak unicorn.

Faced with slipping smartphone sales, Apple may have found a new way to edge in on Google’s map monopoly: a fleet of survey drones.

Google’s new phone won’t hit the market until Thursday, but the reviews are already in: when it comes to speed and features, Pixel has got what it takes to loosen Apple’s grip on the smartphone market.

But before it can do that, Google must surmount a much trickier and far less tangible obstacle: the cult of iPhone.

Colin Haskett guides people through some of the most difficult times in their lives.

The London-area funeral director has spent the last 15 years working closely with families who have lost loved ones.

The era of dropping onto one knee — ring in hand — and simply uttering “will you marry me?” is over.

Today’s wedding proposals are often painstakingly choreographed, splashy, public occasions resulting in stories and photos that are ready-made to share and post. Flash mobs of dancing strangers, helicopter trips to pristine mountain tops, professional-quality movies that incorporate special effects — nothing is over the top anymore when asking for someone’s hand in marriage.

And to help offset the pressure of creating a moment worth Instagramming, there’s now a plethora of Vancouver-based services that plan unique wedding proposals and special date nights. 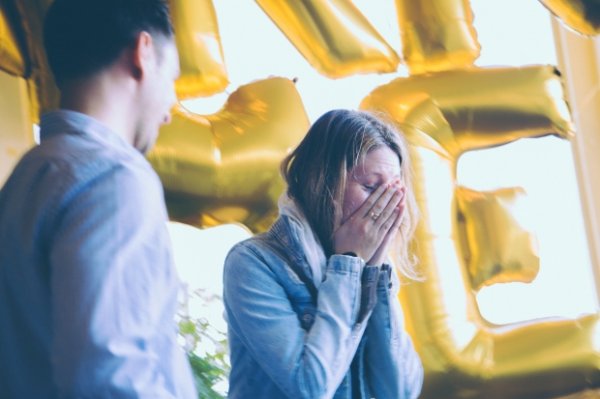 As our world becomes more plugged in than ever before, the demand for job candidates in STEM fields (Science, Technology, Engineering, and Mathematics) continues to increase. A recent analysis from 2013 predicts that STEM jobs will grow 55 percent faster than non-STEM jobs over the next decade.

The Wearable Computer for Little Girls

How children will respond to wearable, educational technology—and what effects it might have on them—remains unclear. "Children’s toys, and especially ones that encourage learning, shouldn’t be seen as corrective; they ought to be seen as challenging children," says Isabel Pedersen, a professor of social science at the University of Ontario Institute of Technology who studies wearable technologies.

A new project by the Digital Culture and Media Lab (DeCiMaL) is exploring ways to sync feelings about art through an interactive experience using brain-sensing wearable technology that gives art goers a chance to get inside the mind of curators and artists to create a brain-based dialogue on art.

The Agenda with Steve Paikin: Our Digital Lives

For all of the connectedness that the online world gives us, it comes with a cost: the potential loss of privacy. Is this loss simply the price to pay for staying globally connected?

Life After Digital is a one-hour documentary about the ways digital technology has changed human life in the last few years. Directed by Marc de Guerre, Life After Digital has its world broadcast premiere on TVO, Wednesday, October 15, 2014.

In the article written by Columnist Nick Bilton, Isabel Pedersen, the author of “Ready to Wear: A Rhetoric of Wearable Computers and Reality-Shifting Media,” said that until now, companies have been treating the design of wearable computers as, well, the design of computers. In contrast, fashion designers think about style, age, taste and a number of other criteria when they make clothing and jewelry for consumers. (Article also appeared in The Times of India).

The Quantified Self – Spur Toronto 2015

Most of the new technology today is invented, adopted and celebrated well before understanding how it will impact our lives, cultures, and social practices. It’s in this area that Isabel Pedersen is most interested in as Canada Research Chair in Digital Life, Media and Culture. She is studying how the public prepares for new technologies like wearables and how media, like pop culture and film, is being used to influence parts of our humanity and our technological creativity.

Spur Festival not afraid to ask the big questions

Meet Spur, the newest festival of ideas, which hits Calgary for a weekend full of events beginning April 25.
“The common thread of the Spur festival is the value of a longform conversation,” says the Spur blog, written by artistic producer Nick Hutcheson. Some of the events scheduled for Calgary include... Wired Magazine columnist Clive Thompson talking about the value of connectivity and technology on culture in the digital age with culture expert Isabel Pedersen.

Looking into the future: wearables & implantables

However, wearables have been around since the 1980s and “a lot of respectable schools worldwide have been working on this for long time.” The technology got a consumer life with the announcement of Google Glass last spring, she says. “Google Glass very quickly got everybody’s attention.”

The recommendation to restrict the technology is all about keeping distractions out of the classroom, not being heavy-handed with kids, says the Ontario Elementary Teachers' Federation, which represents 76,000 public elementary teachers.

“Social media such as Facebook, Snapchat and basic texting are distracting because they engender ‘always on’ practices where students feel compelled to engage in communication,” said Isabel Pedersen, the Canada research chair in digital life, media and culture. “Teachers are competing with this constant digital distraction,” Still, properly used, Pedersen says the technology can be beneficial in the classroom.

To hear a technological evangelist talk about the future of technology can make it seem inevitable -- we’re heading into the cyborg age, like it or not.

“We’re being convinced that carryable technology (i.e. smartphones) will become wearable technology (i.e. Googe Glass), will become implantable technology—brain implants and things miniaturized to the nanoscale, and we’ll be able to put them in our body,” says Isabel Pedersen, the Canada Research Chair in Digital Life, Media and Culture and associate professor at the University of Ontario Institute of Technology, who studies the rhetoric of technological process.

Google Glass is just the beginning

Isabel Pedersen, who researches wearable and mobile media culture at the University of Ontario Institute of Technology, acknowledged that wearable computing has existed for decades, but she said the arrival of Google Glass is still significant because it makes the technology available to consumers for the first time.

"It's the mainstreaming of this kind of device," she said. "I really think we're on the cusp of a big change with things like Google Glass."

Matt Galloway spoke with Isabel Pedersen. She holds the Canada Research Chair in Digital Life, Media and Culture at the University of Ontario Institute of Technology, and she researches how the devices we use change our lives, not just for the better.

Counting for Something: Postmillennial Lives, Data, and Digital Futures

From Carryables to Wearables to Implantables . . .

Presupposing A Future in Digital Telepathy

From Carryables to Wearables to Implants and Beyond