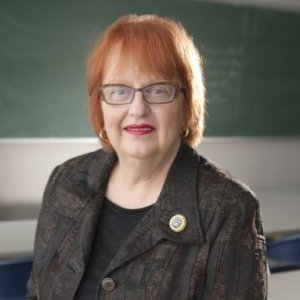 
Expert in the history of contemporary sex and gender. An award winning professor and expert on how to improve teaching and student success.

JACQUELINE MURRAY is Professor of History at the University of Guelph. She served as Dean of Arts (2001-2006) and as Director of the First-Year Seminar Program (2011-2016). She is Status Professor of Medieval Studies at the University of Toronto. She earned a first class honours degree in History from the University of British Columbia, and an M.A. in History and a Ph.D. in Medieval Studies from the University of Toronto. She was a Canada Research Fellow from 1988-1991 and has received numerous research grants. She taught History at the University of Windsor (1989-2001) where she was Founding Director of the Humanities Research Group. She has served as President of the Society for Medieval Feminist Research and President of the Canadian Society of Medievalists. She is a Life Member of Clare Hall, Cambridge University and an alumna of Massey College (Toronto) and Green College (UBC).
Jacqueline is an expert in the history of marriage and the family, women, and gender and sexuality in the Middle Ages. This provides a unique view on the history of western ideas and values pertaining to sex and gender. She has been interviewed on both television and radio and published in national newspapers one questions of sexual values that are clarified by examining their historical roots.
Jacqueline is actively engaged in the Scholarship of Teaching and Learning, focusing in particular on the impact of first-year seminars and the transformative power of enquiry-based learning. She has published articles in the Canadian Journal of Higher Education, the Canadian Journal of the Scholarship of Teaching and Learning, and Collected Essays on Learning and Teaching. Her teaching innovation and excellence has been acknowledged by the John Bell Award from the University of Guelph, the D2L Innovation Award from the Society for Teaching and Learning in Higher Education and the Special Merit Award from the University of Guelph Faculty Association. In 2014 she received a 3M National Teaching Award.

A community award recognizing contributions to education across all levels, and ongoing mentorship of young women.

Convocation Address: “Let curiosity be your guide and your inspiration,”

An inspirational review of what students learn and will take with them into their future life. Also mounted on the Council of Ontario Universities website:

A Phallus in Wonderland. A Cultural History of the Penis

Historical consultant and extensive on air interviews for CBC ideas program investigating masculinity and the phallus throughout history.

The History of Sex

A five-part series for The History Channel. On air interview about sex and sexuality in the Middle Ages. First aired August 1999 (episode 3)

Multidisciplinary, international meeting of researchers on the history and development of marriage in western society, 1200-1700.

“Male Sexuality and Gender Construction in the Middle Ages.”

Major research project to understand the interrelationship between male sexuality and embodiment and the cultural construction of masculinity in the Middle Ages. The project provides insights into contemporary understandings of masculinity.

An international meeting focusing on the integrated distinctly francophone culture that spanned the Detroit River -- Le Détroit -- from the earliest settlement to the 1960.

“The Social Sciences and Humanities Research in HIV/AIDS”

This project brought together 30 scholars & 11 students from 5 countries to examine the wisdom that the humanities and social sciences could bring to understanding and dealing with the HIV/AIDS epidemic. At this time virtually all research was biomedical. This meeting brought to the fore the importance of alternative approaches such as discourse analysis, cultural explications, individual and group dynamics etc.

“Practice of female genital mutilation must be stopped.”

A discussion of FGM in Africa as a gratuitous practice, not based on religion as is often contended but as an instance of extreme misogyny.

Article challenges the Western pressures on the Ghanaian government to close the witchcamps and send the women back to the villages they fled. The issue is not witchcamps but the way witchcraft accusations can be manipulated, much as was seen in the European MIddle Ages with the witch hunts. Co-authored by Lauren Wallace and Jacqueline Murray,

“Stealing relics: An ancient pastime that lives on today”

“In Africa, accusations of witchcraft still a reality for many women,”

Draws to people's attention that in Ghana accusations of witchcraft are a form of violence against women. Seeking to dispel myths, we discuss our trip to the witch camp of Gambaga and meeting the women who live there. Co-authored by Jacqueline Murray and Lauren Wallace,

Challenging the antiquated and anti-scientific view of Congressman Todd Akins (and similar) who argued that a woman who was raped would only become pregnant if she enjoyed it. The article traces such views to their origins in ancient and medieval medicine and reveals how women have suffered from them.

“The Whores of Yore”

An analysis of the Ontario Court of Appeal's decision to legalize brothels. Examining the history of prostitution and of brothels in the Middle Ages, the article reveals that prostitutes were not segregate in medieval cities but were part of the social fabric of city life, integrated and interacting with their neighbours.

An exploration of clerical celibacy in the Roman Catholic Church, detailing the history of a married clergy. Set against the public assertions that the clergy had always been celibate by a priest contemplating marriage!

“The Untold Price of Her Virginity.”

A young woman in Nevada publicized that she would auction off her virginity to the highest bidder, which caused public outcry and a bidding war. The article traces why virginity was important in the past, to ensure a lawful heir. It examines how societies -- mostly men -- have fetishized the hymen, arguing that in an era of DNA testing, virginity is irrelevant.

"A History of Infanticide"

Discusses a case in the news in which a postpartum woman was charged with murdering a child only weeks old. The article asks about the appropriateness of a murder charge given the well known emotional challenges to women post partum. It looks at how medieval society dealt with the situation as both serious but with a mother warranting compassion.

At the height of the same-sex marriage debate in Ontaio, this article examined the various permutations of marriage across Christian history, noting that it had never been essential -- Adam and Eve -- but had taken on many forms and included and excluded many categories of people such as slave and elderly. The tendency of marriage had been to expand outward and embrace more people as since in the inclusivity of same-sex marriage.

“Blessing Unions Through the Ages. The institution of marriage is both ancient and flexible.”

One of the first steps in the process to legalize same-sex marriage in Ontario was when Rev Brent Hawkes read the banns to marry two same-sex couples. For most Ontarions the reading of the banns was a mystery. This article traced its role through Christian history and explained how it was relevant om 21st century Canada.

This article traces the legal context for a practice found in medieval England in cases where a man was alleged to be impotent. How does one prove this. Included with medical evidence, examination, the testimonies of witnesses was deputizing women to examine the man and the couple trying to engage in coitus, and indeed sometimes the witnesses tried to stimulate a man unable to perform with his wife. The article discusses why this might have been necessary for evidence.