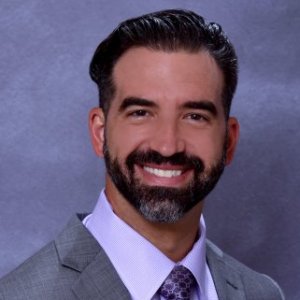 Dr. Blair grew up in rural Connecticut before earning his bachelor’s degree at the University of Maryland and medical degree at Drexel University College of Medicine. Confronted by the events of September 11th, 2001, while living in the Washington, DC area, Dr. Blair accepted the Health Professions Scholarship and joined the Army going into medical school. He completed his orthopaedic surgery residency at Brooke Army Medical Center in San Antonio, TX, during the second surge of the Global Wars on Terrorism before furthering his training in orthopaedic trauma at the Florida Orthopaedic Institute in Tampa, FL. During his active duty time in the Army, Dr. Blair deployed to Afghanistan and Syria and was awarded the Bronze Star Medal in 2015. He was part of the teaching faculty at William Beaumont Army Medical Center and Texas Tech University Health Sciences Center in El Paso, TX. After completion of his military obligation in the Spring of 2020 at the rank of Lieutenant Colonel, he began his civilian life as the Director of Orthopaedic Trauma at the Medical College of Georgia at Augusta University where he specializes in fractures of the pelvis and acetabulum as well as limb salvage and post-traumatic deformity correction. His hobbies include competing in ultramarathons and obstacle course races as well as spending time with his wife, young daughter, and two dogs, Tango and Sierra.