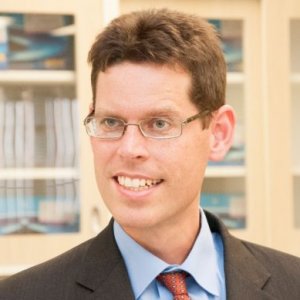 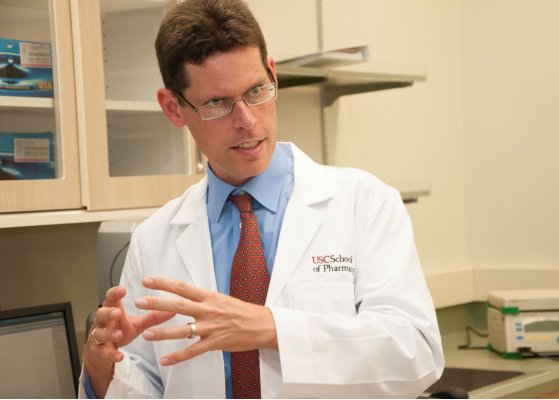 Dr. MacKay received his SB in chemical engineering and biology from the Massachusetts Institute of Technology in 1999. A Howard Hughes Medical Institute Predoctoral Fellow, he completed his PhD at the University of California at San Francisco and Berkeley in the joint graduate group in Bioengineering in 2005. As a Kirschstein National Research Service Award Postdoctoral Fellow, Dr. MacKay studied at Duke University in the Department of Biomedical Engineering. In 2008 Dr. MacKay joined the faculty at the University of Southern California. Dr. MacKay is a full member of the USC Norris Comprehensive Cancer Center. He has authored over 49 peer-reviewed publications. His work is and has been supported by the US Army, NIH/NIGMS, NIH/NIBIB, NIH/NEI, StopCancer, USC Ming Hsieh Institute, and the USC Whittier Foundation. His group explores biomolecular engineering and nanomedicine. At the USC School of Pharmacy, Dr. MacKay has deep expertise teaching drug delivery, nanoscience, and pharmacokinetics.

Our lab engineers innovative protein-polymer tools and drug carriers that respond to the environment. Cancer and ocular drug delivery are our primary focus; however, we also develop biomaterials that modulate cell signaling and trafficking. Protein-polymers are repetitive polypeptides that can be expressed in cells, fused to functional peptides, and tuned to respond to cues such as temperature, concentration, or nanoassembly. Composed from genetically-engineered biomaterials, their sequence and behavior can be precisely tailored at the genetic level. Drug delivery in the eye and cancer is often limited by access to and retention at the target site. In addition, many small molecules are dose-limited by toxicity at peripheral sites in the body. Our strategy is to repackage drugs and functional peptides into protein-polymers that control release and reduce toxicity. Successful carrier strategies are being formulated and evaluated for translation to the clinic. Using these biomaterials, our group has recently made significant breakthroughs by assembling 'microdomains' inside living cells. When decorated with functional proteins, these microdomains are helping us to precisely modulate cellular biology. To explore the potential for these new tools, we explore fundamental relationships between microdomain phase behavior and interactions with other proteins, membranes, organelles, and cells.

Generation of a Monoclonal Antibody to Detect Elastin-like Polypeptides

2019 The identification and use of antibodies dominate the biologic, clinical diagnostic, and therapeutic landscapes. In particular, antibodies have become essential tools in a variety of protein analytical experiments and to study the disposition of biologic therapeutics. One emerging class of peptide biologics is known as the elastin-like polypeptides (ELPs), which are repetitive protein polymers inspired by human tropoelastin. A major limitation in the clinical translation of ELP biologics has been a lack of a monoclonal antibody (mAb) to characterize their identity during expression. To facilitate these studies, we successfully generated a new mAb that is specific toward ELPs and ELP fusion proteins. A purified antibody was evaluated in an ELISA, western blotting, and immunofluorescence assay. The optimal anti-ELP mAb proved to be highly reactive and specific toward ELPs. Moreover, they were able to detect ELPs with a variety of aliphatic guest residues. ELPs phase-separate in response to heating; furthermore, when incubated at a great excess of ELPs, the anti-ELP mAb partially blocks phase separation. These findings are direct evidence that novel murine mAbs can be raised against purified ELPs. This new reagent will enable purification, experimental detection, and characterization of these biopolymers.

2019 Cathepsin S (CTSS) is highly increased in Sjögren’s syndrome (SS) patients tears and in tears and lacrimal glands (LG) of male non-obese diabetic (NOD) mice, a murine model of SS. To explore CTSS’s utility as a therapeutic target for mitigating ocular manifestations of SS in sites where CTSS is increased in disease, the tears and the LG (systemically), the peptide-based inhibitor, Z-FL-COCHO (Z-FL), was administered to 14–15 week male NOD mice. Systemic intraperitoneal (i.p.) injection for 2 weeks significantly reduced CTSS activity in tears, LG and spleen, significantly reduced total lymphocytic infiltration into LG, reduced CD3+ and CD68+ cell abundance within lymphocytic infiltrates, and significantly increased stimulated tear secretion. Topical administration of Z-FL to a different cohort of 14–15 week male NOD mice for 6 weeks significantly reduced only tear CTSS while not affecting LG and spleen CTSS and attenuated the disease-progression related reduction of basal tear secretion, while not significantly impacting lymphocytic infiltration of the LG. These findings suggest that CTSS inhibitors administered either topically or systemically can mitigate aspects of the ocular manifestations of SS.

2019 The USFDA-approved immunosuppressive drug rapamycin (Rapa), despite its potency, is limited by poor bioavailability and a narrow therapeutic index. In this study, we sought to improve bioavailability of Rapa with subcutaneous (SC) administration and to test its therapeutic feasibility and practicality in a murine model of Sjögren’s syndrome (SS), a systemic autoimmune disease with no approved therapies. To improve its therapeutic index, we formulated Rapa with a carrier termed FAF, a fusion of the human cytosolic FK506-binding protein 12 (FKBP12) and an elastin-like polypeptide (ELP). The resulting 97 kDa FAF (i) has minimal burst release, (ii) is “humanized”, (iii) is biodegradable, (iv) solubilizes two Rapa per FAF, and (v) avoids organic solvents or amphiphilic carriers. Demonstrating high stability, FAF remained soluble and monodisperse with a hydrodynamic radius of 8 nm at physiological temperature. A complete pharmacokinetic (PK) analysis of FAF revealed that the bioavailability of SC FAF was 60%, with significantly higher blood concentration during the elimination phase compared to IV FAF. The plasma concentration of Rapa delivered by FAF was 8-fold higher with a significantly increased plasma-to-whole blood ratio relative to free Rapa, 24 h after injection. To evaluate therapeutic effects, FAF–Rapa was administered SC every other day for 2 weeks to male non-obese diabetic (NOD) mice, which develop an SS-like autoimmune-mediated lacrimal gland (LG) inflammation and other characteristic features of SS. Both FAF–Rapa and free Rapa exhibited immunomodulatory effects by significantly suppressing lymphocytic infiltration, gene expression of IFN-γ, MHC II, type I collagen and IL-12a, and cathepsin S (CTSS) activity in LG compared to controls. Serum chemistry and histopathological analyses in major organs revealed no apparent toxicity of FAF–Rapa. Given its improved PK and equipotent therapeutic efficacy compared to free Rapa, FAF–Rapa is of further interest for systemic treatments for autoimmune diseases like SS.

2019 Contact lenses are widely prescribed for vision correction, and as such they are an attractive platform for drug delivery to the anterior segment of the eye. This manuscript explores a novel strategy to drive the reversible adsorption of peptide-based therapeutics using commercially available contact lenses. To accomplish this, thermo-sensitive elastin-like polypeptides (ELPs) alone or tagged with a candidate ocular therapeutic were characterized. For the first time, this manuscript demonstrates that Proclear CompatiblesTM contact lenses are a suitable platform for ELP adsorption. Two rhodamine-labelled ELPs, V96 (thermo-sensitive) and S96 (thermo-insensitive), were employed to test temperature-dependent association to the contact lenses. During long-term release into solution, ELP coacervation significantly modulated the release profile whereby more than 80% of loaded V96 retained with a terminal half-life of ~4 months, which was only 1–4 days under solubilizing conditions. A selected ocular therapeutic candidate lacritin-V96 fusion (LV96), either free or lens-bound LV96, was successfully transferred to HCE-T cells. These data suggest that ELPs may be useful to control loading or release from certain formulations of contact lenses and present a potential for this platform to deliver a biologically active peptide to the ocular surface via contact lenses.

2018 As a potent macrolide immunosuppressant, cyclosporine A (CsA) is used to treat multiple autoimmune diseases, including non-autoimmune and autoimmune-mediated dry eye disease, rheumatoid arthritis and psoriasis. Despite its potency, CsA has poor solubility, poor bioavailability, and can cause serious adverse reactions such as nephrotoxicity and neurotoxicity. To overcome these limitations, we invented a new strategy to carry CsA by fusing its cognate human receptor, cyclophilin A (CypA), to a 73 kDa elastin-like polypeptide (ELP) termed A192 using recombinant protein expression. Derived from human tropoelastin, ELPs are characterized by the ability to phase separate above a temperature that is a function of variables including concentration, molecular weight, and hydrophobicity. The resultant fusion protein, termed CA192, which assembles into a dimeric species in solution, effectively binds and solubilizes CsA with a Kd of 189 nM, comparable to that of endogenous CypA with a Kd of 35.5 nM. The release profile of CsA from CA192 follows a one phase decay model with a half-life of 957.3 h without a burst release stage. Moreover, CA192-CsA inhibited IL-2 expression induced in Jurkat cells through the calcineurin-NFAT signaling pathway with an IC50 of 1.2 nM, comparable to that of free CsA with an IC50 of 0.5 nM. The intravenous pharmacokinetics of CA192 followed a two-compartment model with a mean residence time of 7.3 h. Subcutaneous administration revealed a bioavailability of 30% and a mean residence time of 15.9 h. When given subcutaneously for 2 weeks starting at 14 weeks in male non-obese diabetic (NOD) mice, a model of autoimmune dacryoadenitis used to study Sjögren's syndrome (SS), CA192-CsA (2.5 mg/kg, every other day) significantly (p = 0.014) increased tear production relative to CA192 alone. Moreover, CA192 delivery reduced indications of CsA nephrotoxicity relative to free CsA. CA192 represents a viable new approach to deliver this effective but nephrotoxic agent in a modality that preserves therapeutic efficacy but suppresses drug toxicity.