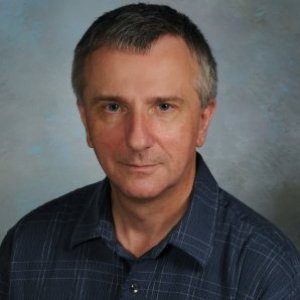 
Janusz Konieczny is a professor of mathematics at the University of Mary Washington.

Janusz Konieczny, Professor of Mathematics, earned a Ph.D. (1992) in mathematics from Pennsylvania State University, after receiving an M.S. (1982) in computer science and an M.S. (1978) in mathematics from Jagiellonian University (Poland). Among his honors is the UMW Alumni Association Outstanding Young Faculty Member Award and Waple Faculty Professional Achievement Award. He is the author of over 50 research articles in the theory of algebraic semigroups. His most recent articles have appeared in International Journal of Group Theory, Communications in Algebra, Semigroup Forum, and Journal of Algebra. Recently, he has given a presentation at the meeting of the American Mathematical Society. Dr. Konieczny was awarded a Waple Professorship for 2015-2017 and a sabbatical leave for the fall of 2017.

Awarded by the University of Mary Washington Alumni Association.

The Commuting Graph of the Symmetric Inverse Semigroup

The commuting graph of the symmetric inverse semigroup

The largest subsemilattices of the endomorphism monoid of an independence algebra

Linear Algebra and its Applications

We prove that a largest subsemilattice of End(A) has either 2n−1 elements (if the clone of A does not contain any constant operations) or 2n elements (if the clone of A contains constant operations). As corollaries, we obtain formulas for the size of the largest subsemilattices of: some variants of the monoid of linear operators of a finite-dimensional vector space, the monoid of full transformations on a finite set X, the monoid of partial transformations on X, the monoid of endomorphisms of a free G-set with a finite set of free generators, among others.

Let G be a group. A G-set is a nonempty set A together with a (right) action of G on A. The class of G-sets, viewed as unary algebras, is a variety. For a set X, let AG(X) be the free algebra on X in the variety of G-sets. We determine the group of automorphisms of End(AG(X)), the monoid of endomorphisms of AG(X).

Bulletin of the Australian Mathematical Society

For an arbitrary set X (finite or infinite), denote by I(X) the symmetric inverse semigroup of partial injective transformations on X. For an element a in I(X), let C(a) be the centralizer of a in I(X). For an arbitrary a in I(X), we characterize the elements b in I(X) that belong to C(a), describe the regular elements of C(a), and establish when C(a) is an inverse semigroup and when it is a completely regular semigroup. In the case when the domain of a is X, we determine the structure of C(a) in terms of Green's relations.