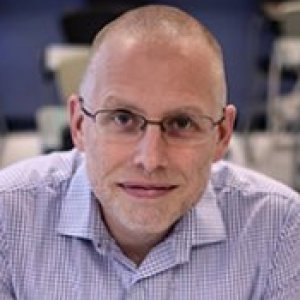 
Using the science of learning to help people be better consumers of information.

Jeff Greene leverages the science of learning to help people be better critical consumers and producers of information, particularly in online and technology environments.

Greene began his career in higher education administration and became interested in the science of learning as he watched some students struggle to translate their capacity into academic and lifetime success.

Greene believes that the vast majority of students, from kindergarten through graduate school, have the capability to achieve their goals. Many students struggle because they have not been exposed to the “hidden curriculum” of learning; this is what Jeff strives to understand and communicate to students, educators, and parents.

The digital world brings many opportunities to learners, but also many challenges and dangers. Greene works to understand how to help people be thoughtful users and producers of digital content, with particular interests in how people learn about science, socioscientific issues, and history when online.

Greene uses the science of learning to study the ways people learn using digital and technological resources, and how to help them use those resources more effectively. Specifically, he studies how people can develop their capacity to self-regulate their learning, as well as how they can become better critical consumers, users, and producers of what they encounter online and in the world. His research includes both experimental and non-experimental designs as well as quantitative, qualitative and mixed methods.

As students across the state of North Carolina and the country start back to school, this is an opportune time for teachers, parents and students to reflect on how to learn most effectively. Research on the science of learning has uncovered several important keys to learning. Following are four of them.

Welcome to the Misinformation Age. Contrary to futurists’ predictions of a golden Information Age, our research has shown most people struggle to effectively learn online. The Internet is awash in information: Some of it helpful, some of it deceptive, and all of it challenging for people to integrate and understand.

Jeff Greene hosts a podcast series, focusing on topics covered in the journal Educational Psychologist. Authors discuss their work, what it means for scholarship and practice, future directions, and other interesting topics.

Why learning is so much bigger than school

Host Frank Stasio talks to Jeffrey Greene, professor of educational psychology and learning sciences at the University of North Carolina-Chapel Hill, about how humans remember and apply information and which common myths about learning are hampering students, parents and teachers.

Communicating the science of learning in a post-truth world

The science of learning in the digital age

New literacies and the psychology of learning

Presentation at the Triangle Literacy Symposium: The Achievement Gap and the Changing Face of Literacy, Durham, NC, June 2018.

Rediscovering the foundations of self-regulation in the digital age

What is Truth in Research: Can Methodologically Strong Research Provide Clarity in the Post-Truth Era?

First-year courses have been used to bolster college student success, but empirical evidence on their efficacy is mixed. We investigated whether a first-year science of learning course, focused on self-regulated learning, would benefit first-generation college students. We randomly assigned students to a treatment condition involving enrollment in the course, a comparison condition in which students had access to online course materials only, or a control condition. From this larger study, we recruited 43 students to participate in a laboratory task involving learning about the circulatory system with a computer. We found that treatment and comparison students experienced greater changes in conceptual knowledge than the control group, and we found differences in the enactment of monitoring and strategy use across conditions.

Beyond knowledge: Examining digital literacy's role in the acquisition of understanding in science

Today's students must learn to be critical consumers of the digital learning technologies that are rapidly populating their world. Digital literacy is not an innate skill, and comprises more than facility using the Internet, word processing programs, or social media. Likewise, literacy itself has been redefined as the acquisition of not just knowledge, but also understanding including reasons and evidence for knowing. We wished to build upon Greene et al.'s (2014) research on the role of digital literacy when acquiring knowledge by conducting a similar study with a learning task focused on acquiring understanding. Using a similar single-group pretest-posttest correlational design with a larger sample of 53 college students but a different learning task focused on understanding, we found evidence of significant differences in digital literacy processing. In this study, participants engaged in more planning, monitoring, and epistemic cognition processing than participants in the previous study. Our findings have important implications for studying and promoting digital literacy, while also illustrating the importance of investing in resource-intensive work on differences in digital literacy processing across a variety of domains, contexts, and educational goals.

Predictors of retention and achievement in a massive open online course

Massive open online courses (MOOCs) have been heralded as an education revolution, but they suffer from low retention, calling into question their viability as a means of promoting education for all. In addition, numerous gaps remain in the research literature, particularly concerning predictors of retention and achievement. In this study, we used survival analysis to examine the degree to which student characteristics, relevance, prior experience with MOOCs, self-reported commitment, and learners’ implicit theory of intelligence predicted retention and achievement. We found that learners’ expected investment, including level of commitment, expected number of hours devoted to the MOOC, and intention to obtain a certificate, related to retention likelihood. Prior level of schooling and expected hours devoted to the MOOC predicted achievement.

Proliferating information and viewpoints in the 21st century require an educated citizenry with the ability to think critically about complex, controversial issues. Critical thinking requires epistemic cognition: the ability to construct, evaluate, and use knowledge. Epistemic dispositions and beliefs predict many academic outcomes, as well as whether people use their epistemic cognition skills, for example, scrutinizing methods in science and evaluating sources in history. The evidence supporting the importance of epistemic cognition, inside and outside of the classroom, has led to a growing body of intervention research. However, more research can reveal how to best position teachers and students to develop and enact productive epistemic cognition. Promising directions for future research and policy include developing learning environments that promote students’ epistemic cognition and subsequent critical thinking, as well as incorporating this work into educator preparation programs.

Empirical evidence regarding relations among a model of epistemic and ontological cognition, academic performance, and educational level

Models of personal epistemology have not been sufficiently integrated despite conceptual similarities. We attempted to model both dimensional and positional aspects of personal epistemology, as well as examine the domain specificity of these phenomena. The conceptual framework for this study was a new model of epistemic and ontological cognitive development that addresses numerous concerns in the literature. A model-based quantitative instrument was created and administered to 740 students ranging from middle-school through graduate school. Results of confirmatory factor and factor-mixture model analyses provided evidence for the construct validity and reliability of scores from the instrument as well as support for many aspects of the underlying conceptual model. Implications for further model development and research are discussed.