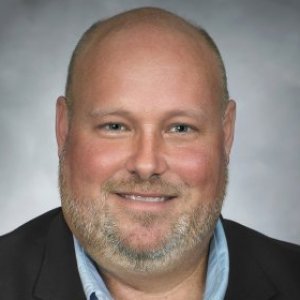 
Dr. Jeff LaMack is a biomedical engineer with expertise on effects of cardiovascular fluid mechanics on devices and pathologies. 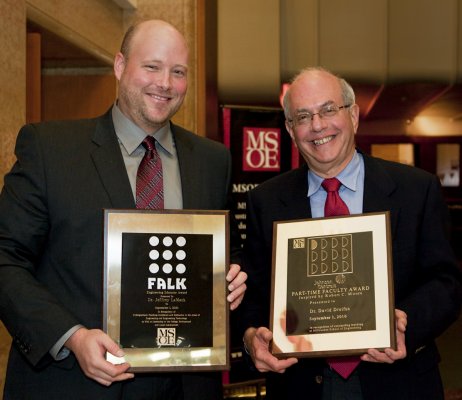 Dr. Jeff LaMack is an associate professor and the biomedical engineering program director in MSOE's Electrical Engineering and Computer Science Department. He joined the faculty in 2006. He teaches on topics such as biological transport phenomena, biomaterials, computer programming, biostatistics,
and biomedical engineering design.

Effects of Cardiovascular Fluid Mechanics on Devices and Pathologies

Biomedical engineering students had an opportunity to network with industry professionals when MSOE hosted the annual December seminar of the Institute of Electrical and Electronics Engineers (IEEE) Milwaukee Section.

Four MSOE biomedical engineering seniors and a faculty member participated in the Biomedical Engineering Society Coulter College training program. The MSOE team was one of 12 selected for the exclusive program.

Spicing up instruction of professional topics in biomedical engineering

Work in Progress: Spicing up instruction of professional topics in biomedical engineering

Assessment of systems engineering-related concepts in a biomedical engineering program

2016 The biological response of living arteries to mechanical forces is an important component of the atherosclerotic process and is responsible, at least in part, for the well-recognized spatial variation in atherosusceptibility in man. Experiments to elucidate this response often generate maps of force and response variables over the arterial surface, from which the force–response relationship is sought. Rowland et al. discussed several statistical approaches to the spatial autocorrelation that confounds the analysis of such maps and applied them to maps of hemodynamic stress and vascular response obtained by averaging these variables in multiple animals. Here, we point out an alternative approach, in which discrete surface regions are defined by the hemodynamic stress levels they experience, and the stress and response in each animal are treated separately. This approach, applied properly, is insensitive to autocorrelation and less sensitive to the effect of confounding hemodynamic variables. The analysis suggests an inverse relation between permeability and shear that differs from that in Rowland et al. Possible sources of this difference are suggested.

2010 The effect of hemodynamic shear stress on endothelial gene expression was investigated in the porcine iliac arteries. A novel statistical approach was applied to computational fluid dynamics simulations of the iliac artery flow field to identify three anatomical regions likely to experience high, medium, and low levels of time average shear stress magnitude. Subsequently, endothelial cell mRNA was collected from these regions in the iliac arteries of six swine and analyzed by DNA microarray. Gene set enrichment analysis demonstrated a strong tendency for genes upregulated or downregulated in one of the extreme shear environments (low or high, relative to medium) to be regulated in the same direction in the other extreme shear environment. This tendency was confirmed for specific genes by real-time quantitative PCR. Specifically, β-catenin, c-jun, VCAM-1, and MCP-1 were all upregulated in low and high shear stress regions relative to the medium shear stress region. eNOS expression was not significantly different in any of the regions. These results are consistent with the notion that endothelial cells chronically exposed to abnormally low or high shear levels in vivo exhibit similar genetic responses. Alternative explanations of this outcome are proposed, and its implications for the role of shear stress in atherogenesis are examined.

2007 The apparent tendency of atherosclerotic lesions to form in complex blood flow environments has led to many theories regarding the importance of hemodynamic forces in endothelium-mediated atherosusceptibility. The effects of shear stress magnitude and spatial shear stress gradient on endothelial cell gene expression in vitro were examined in this study. Converging-width flow channels were designed to impose physiological ranges of shear stress gradient and magnitude on porcine aortic endothelial cells, and real-time quantitative PCR was performed to evaluate their expression of five genes of interest. Although vascular cell adhesion molecule-1 expression was insensitive to either variable, each of the remaining genes exhibited a unique dependence on shear stress magnitude and gradient. Endothelial nitric oxide synthase showed a strong positive dependence on magnitude but was insensitive to gradient. The expression of c-jun was weakly correlated with magnitude and gradient, without an interaction effect. Monocyte chemoattractant protein-1 expression varied inversely with gradient and also depended on the interaction of gradient with magnitude. Intercellular adhesion molecule-1 expression also exhibited an interaction effect, and increased with shear magnitude. These results support the notion that vascular endothelial cells are able to sense shear gradient and magnitude independently.

2007 Among the early events associated with atherosclerotic lesion development are increased macromolecular permeability of the endothelium and expression of genes that affect inflammation and oxidative state. The purpose of this study was to measure the expression of several atherosclerosis-related genes in endothelial cells scraped from arch and thoracic regions of the porcine aorta exhibiting elevated permeability. Aortae were collected from six swine that were exposed to circulating Evans blue dye (EBD), a marker of transendothelial albumin permeability. Endothelial cells were scraped from (1) white regions in the thoracic aorta, (2) light blue streaks and blue regions near ostia in the thoracic aorta, and (3) dark blue regions in the aortic arch. Expression levels of several genes were analyzed by real-time quantitative PCR. There were modest differences between the expression levels of several genes in cells from the light blue regions relative to those from white regions. In the dark blue regions, eNOS was drastically downregulated and MCP-1 was upregulated relative to their expression in both the white and light blue regions. The distinct levels of permeability and differences in gene expression profiles exhibited by cells from these different regions of the aorta may reflect corresponding differences in their hemodynamic environments.