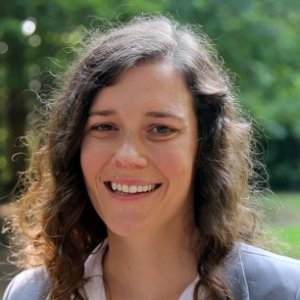 
Jennifer Kaiser examines the formation of air pollutants, with a focus on the emissions and chemistry of volatile organic compounds.

Dr. Kaiser joined Georgia Tech as an assistant processor in Civil and Environmental Engineering and Earth and Atmospheric Sciences in the Fall of 2018. Her research examines the formation of air pollutants, with a focus on the emissions and chemistry of volatile organic compounds. Dr. Kaiser’s interests span from instrument development to data assimilation, and her projects have examined the influence of agriculture, oil and gas production, and the biosphere on air quality.

Interactions of Biogenic and Anthropogenic Emissions

Emissions and Chemistry of Air Pollutants

2019 We evaluate two inverse modeling methods by conducting inversion experiments using the GEOS‐Chem chemical transport model and its adjoint. We simulate synthetic NH3 column density as observed by the Cross‐track Infrared Sounder over North America to test the ability of the iterative finite difference mass balance (IFDMB) and the four‐dimensional variational assimilation (4D‐Var) methods to recover known NH3 emissions. Comparing to the more rigorous 4D‐Var method, the IFDMB approach requires 3–4 times lower computational cost and yields similar or smaller errors (12–17% vs 17–26%) in the top‐down inventories at 2° × 2.5° resolution. These errors in IFDMB‐derived emission estimates are amplified (53–62%) if compared to the assumed true emissions at 0.25° × 0.3125° resolution. When directly conducting inversions at 0.25° × 0.3125°, the IFDMB consistently exhibits larger errors (44–69% vs 30–45%) than the 4D‐Var approach. Analysis of simulated differences in NH3 columns and in NH3 emissions suggests stronger misalignments at the finer resolution, since the local column is more strongly influenced by spatial smearing from neighboring grids. Adjoint calculations indicate that the number of adjacent grids needed to account for most (>65%) of the emission contributions to the local columnar NH3 abundance over an NH3 source site increases from ~1 at 2° × 2.5° to ~10 at 0.25° × 0.3125°, leading to increased errors especially in IFDMB. Applying inversion results at 2° × 2.5° to update the a priori emissions at 0.25° × 0.3125° could improve the accuracy of IFDMB inversions and reduce the computational cost of 4D‐Var.

2018 Recent studies suggest overestimates in current U.S. emission inventories of nitrogen oxides (NOx = NO + NO2). Here, we expand a previously developed fuel-based inventory of motor-vehicle emissions (FIVE) to the continental U.S. for the year 2013, and evaluate our estimates of mobile source emissions with the U.S. Environmental Protection Agency’s National Emissions Inventory (NEI) interpolated to 2013. We find that mobile source emissions of NOx and carbon monoxide (CO) in the NEI are higher than FIVE by 28% and 90%, respectively. Using a chemical transport model, we model mobile source emissions from FIVE, and find consistent levels of urban NOx and CO as measured during the Southeast Nexus (SENEX) Study in 2013. Lastly, we assess the sensitivity of ozone (O3) over the Eastern U.S. to uncertainties in mobile source NOx emissions and biogenic volatile organic compound (VOC) emissions. The ground-level O3 is sensitive to reductions in mobile source NOx emissions, most notably in the Southeastern U.S. and during O3 exceedance events, under the revised standard proposed in 2015 (>70 ppb, 8 h maximum). This suggests that decreasing mobile source NOx emissions could help in meeting more stringent O3 standards in the future.

High-resolution inversion of OMI formaldehyde columns to quantify isoprene emission on ecosystem-relevant scales: application to the southeast US

2018 Isoprene emissions from vegetation have a large effect on atmospheric chemistry and air quality. “Bottom-up” isoprene emission inventories used in atmospheric models are based on limited vegetation information and uncertain land cover data, leading to potentially large errors. Satellite observations of atmospheric formaldehyde (HCHO), a high-yield isoprene oxidation product, provide “top-down” information to evaluate isoprene emission inventories through inverse analyses. Past inverse analyses have however been hampered by uncertainty in the HCHO satellite data, uncertainty in the time- and NOx-dependent yield of HCHO from isoprene oxidation, and coarse resolution of the atmospheric models used for the inversion. Here we demonstrate the ability to use HCHO satellite data from OMI in a high-resolution inversion to constrain isoprene emissions on ecosystem-relevant scales. The inversion uses the adjoint of the GEOS-Chem chemical transport model at 0.25∘×0.3125∘ horizontal resolution to interpret observations over the southeast US in August–September 2013. It takes advantage of concurrent NASA SEAC4RS aircraft observations of isoprene and its oxidation products including HCHO to validate the OMI HCHO data over the region, test the GEOS-Chem isoprene oxidation mechanism and NOx environment, and independently evaluate the inversion. This evaluation shows in particular that local model errors in NOx concentrations propagate to biases in inferring isoprene emissions from HCHO data. It is thus essential to correct model NOx biases, which was done here using SEAC4RS observations but can be done more generally using satellite NO2 data concurrently with HCHO. We find in our inversion that isoprene emissions from the widely used MEGAN v2.1 inventory are biased high over the southeast US by 40% on average, although the broad-scale distributions are correct including maximum emissions in Arkansas/Louisiana and high base emission factors in the oak-covered Ozarks of southeast Missouri. A particularly large discrepancy is in the Edwards Plateau of central Texas where MEGAN v2.1 is too high by a factor of 3, possibly reflecting errors in land cover. The lower isoprene emissions inferred from our inversion, when implemented into GEOS-Chem, decrease surface ozone over the southeast US by 1–3 ppb and decrease the isoprene contribution to organic aerosol from 40 to 20%.

2017 We report enhancements of glyoxal and methylglyoxal relative to carbon monoxide and formaldehyde in agricultural biomass burning plumes intercepted by the NOAA WP-3D aircraft during the 2013 Southeast Nexus and 2015 Shale Oil and Natural Gas Nexus campaigns. Glyoxal and methylglyoxal were measured using broadband cavity enhanced spectroscopy, which for glyoxal provides a highly selective and sensitive measurement. While enhancement ratios of other species such as methane and formaldehyde were consistent with previous measurements, glyoxal enhancements relative to carbon monoxide averaged 0.0016 ± 0.0009, a factor of 4 lower than values used in global models. Glyoxal enhancements relative to formaldehyde were 30 times lower than previously reported, averaging 0.038 ± 0.02. Several glyoxal loss processes such as photolysis, reactions with hydroxyl radicals, and aerosol uptake were found to be insufficient to explain the lower measured values of glyoxal relative to other biomass burning trace gases, indicating that glyoxal emissions from agricultural biomass burning may be significantly overestimated. Methylglyoxal enhancements were three to six times higher than reported in other recent studies, but spectral interferences from other substituted dicarbyonyls introduce an estimated correction factor of 2 and at least a 25% uncertainty, such that accurate measurements of the enhancements are difficult.

2017 Glyoxal (CHOCHO) is produced in the atmosphere by the oxidation of volatile organic compounds (VOCs). Like formaldehyde (HCHO), another VOC oxidation product, it is measurable from space by solar backscatter. Isoprene emitted by vegetation is the dominant source of CHOCHO and HCHO in most of the world. We use aircraft observations of CHOCHO and HCHO from the SENEX campaign over the southeast US in summer 2013 to better understand the CHOCHO time-dependent yield from isoprene oxidation, its dependence on nitrogen oxides (NOx  ≡  NO + NO2), the behavior of the CHOCHO–HCHO relationship, the quality of OMI CHOCHO satellite observations, and the implications for using CHOCHO observations from space as constraints on isoprene emissions. We simulate the SENEX and OMI observations with the Goddard Earth Observing System chemical transport model (GEOS-Chem) featuring a new chemical mechanism for CHOCHO formation from isoprene. The mechanism includes prompt CHOCHO formation under low-NOx conditions following the isomerization of the isoprene peroxy radical (ISOPO2). The SENEX observations provide support for this prompt CHOCHO formation pathway, and are generally consistent with the GEOS-Chem mechanism. Boundary layer CHOCHO and HCHO are strongly correlated in the observations and the model, with some departure under low-NOx conditions due to prompt CHOCHO formation. SENEX vertical profiles indicate a free-tropospheric CHOCHO background that is absent from the model. The OMI CHOCHO data provide some support for this free-tropospheric background and show southeast US enhancements consistent with the isoprene source but a factor of 2 too low. Part of this OMI bias is due to excessive surface reflectivities assumed in the retrieval. The OMI CHOCHO and HCHO seasonal data over the southeast US are tightly correlated and provide redundant proxies of isoprene emissions. Higher temporal resolution in future geostationary satellite observations may enable detection of the prompt CHOCHO production under low-NOx conditions apparent in the SENEX data.