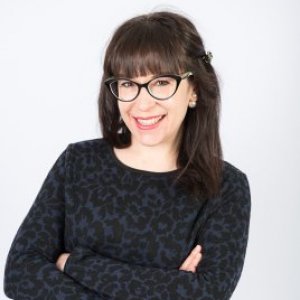 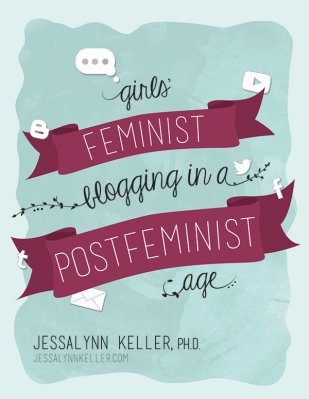 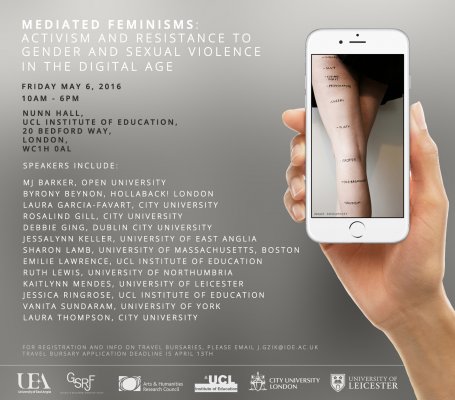 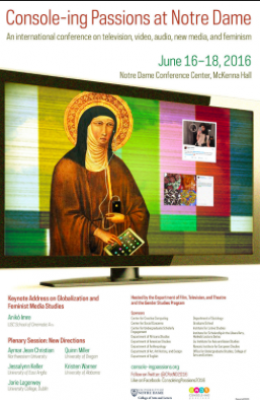 Jessalynn Keller is an Assistant Professor in the Department of Communication, Media, & Film at the University of Calgary, Canada. Her research explores girls’ media cultures, contemporary digital feminisms and mediated celebrity culture. She is author of Girls’ Feminist Blogging in a Postfeminist Age (Routledge 2015) and has published her research in journals and edited anthologies that include Journal of Gender Studies, Continuum: Journal of Media & Cultural Studies, Feminist Media Studies, Information, Communication & Society, and the forthcoming Mediated Girlhoods 2. Jessalynn is a founding steering committee member of the International Girlhood Studies Association and was a plenary speaker at the 2016 Console-ing Passions International Conference on Television, Video, Audio, New Media, and Feminism. She is currently co-writing (with Kaitlynn Mendes and Jessica Ringrose) Digital Feminist Activism: Girls and Women Fight Back Against Rape Culture (Oxford University Press 2018), co-editing (with Maureen Ryan) Emergent Feminisms: Challenging Postfeminist Media Cultures, and conducting ethnographic research on anti-Trump “girl news.”

Ethnographic and Qualitative Methods and Analysis

Was interviewed based on current research on digital rape culture activism. 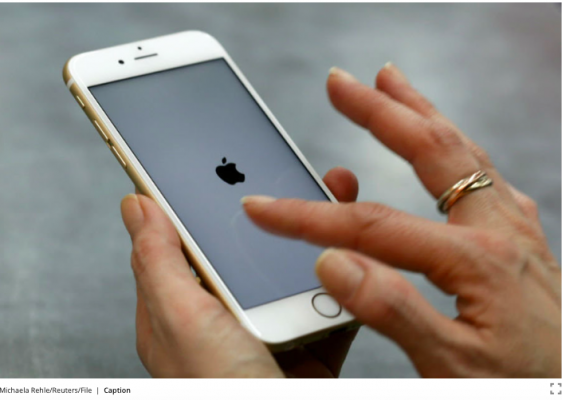 Girls’ Feminist Blogging in a Postfeminist Age explores the practices of U.S.-based teenage girls who actively maintain feminist blogs and participate in the feminist blogosphere as readers, writers, and commenters on platforms including Blogspot, Facebook, Twitter, and Tumblr. Drawing on interviews with bloggers between the ages of fifteen and twenty-one, as well as discursive textual analyses of feminist blogs and social networking postings authored by teenage girls, Keller addresses how these girls use blogging as a practice to articulate contemporary feminisms and craft their own identities as feminists and activists. In this sense, feminist girl bloggers defy hegemonic postfeminist and neoliberal girlhood subjectivities, a finding that Keller uses to complicate both academic and popular assertions that suggest teenage girls are uninterested in feminism.Instead, Keller maintains that these young bloggers employ digital media production to educate their peers about feminism, connect with like-minded activists, write feminist history, and make feminism visible within popular culture, practices that build upon and continue a lengthy tradition of American feminism into the twenty-first century. Girls’ Feminist Bloggers in a Postfeminist Age challenges readers to not only reconsider teenage girls’ online practices as politically and culturally significant, but to better understand their crucial role in a thriving contemporary feminism.

This paper examines the ways in which girls and women are using digital media platforms to challenge the rape culture they experience in their everyday lives; including street harassment, sexual assault, and the policing of the body and clothing in school settings. Focusing on three international cases, including the anti-street harassment site Hollaback!, the hashtag #BeenRapedNeverReported, and interviews with teenage Twitter activists, the paper asks: What experiences of harassment, misogyny and rape culture are girls and women responding to? How are girls and women using digital media technologies to document experiences of sexual violence, harassment, and sexism? And, why are girls and women choosing to mobilize digital media technologies in such a way? Employing an approach that includes ethnographic methods such as semi-structured interviews, content analysis, discursive textual analysis, and affect theories, we detail a range of ways that women and girls are using social media platforms to speak about, and thus make visible, experiences of rape culture. We argue that this digital mediation enables new connections previously unavailable to girls and women, allowing them to redraw the boundaries between themselves and others.

Feminism and generation are live and ideologically freighted issues that are subject to a substantial amount of media engagement. The figure of the millennial and the baby boomer, for example, regularly circulate in mainstream media, often accompanied by hyperbolic and vitriolic discourses and affects of intergenerational feminist conflict. In addition, theories of feminist generation and waves have been and continue to be extensively critiqued within feminist theory. Given the compelling criticisms directed at these categories, we ask: why bother examining and foregrounding issues of generation, intergeneration, and transgeneration in feminist media studies? Whilst remaining sceptical of linearity and familial metaphors and of repeating reductive, heteronormative, and racist versions of feminist movements, we believe that the concept of generation does have critical purchase for feminist media scholars. Indeed, precisely because of the problematic ways that is it used, and the prevalence of it as a volatile, yet only too palpable, organizing category, generation is both in need of continual critical analysis, and is an important tool to be used—with care and nuance—when examining the multiple routes through which power functions in order to marginalize, reward, and oppress. Exploring both diachronic and synchronic understandings of generation, this article emphasizes the use of conjunctural analysis to excavate the specific historical conditions that impact upon and create generation. This special issue of Feminist Media Studies covers a range of media forms—film, games, digital media, television, print media, as well as practices of media production, intervention, and representation. The articles also explore how figures at particular lifestages—particularly the girl and the aging woman—are constructed relationally, and circulate, within media, with particular attention to sexuality. Throughout the issue there is an emphasis on exploring the ways in which the category of generation is mobilized in order to gloss sexism, racism, ageism, class oppression, and the effects of neoliberalism.

This paper focuses on Tavi Gevinson, the teenage fashion blogger-turned-editor in chief of the online magazine Rookie, as a case study with which to interrogate the production and circulation of feminist politics within a ‘post-girl power’ era. Drawing on theories of performativity, I employ a discursive and ideological textual analysis of Gevinson's self-produced media and media coverage to map how she uses the opportunities afforded by digital media to rearticulate narratives of ‘girl power’ and perform a feminist girlhood subjectivity that makes feminism accessible to her many readers. While I argue that Gevinson's ability to do so is positive and demonstrates the porous nature of postfeminist media culture, I also suggest that we must be critical of the ways in which her feminism functions as part of her self brand that reproduces feminism as white, middle-class, and ‘hip’. Thus, I conclude by questioning a larger cultural trend towards the branding of feminism and advocating the need for an intersectional approach to understanding the resurgence of feminism within contemporary popular media culture.

This paper will examine former supermodel Tyra Banks as a contemporary “celebrity entrepreneur,” focusing on Banks' recent shift from television persona to multimedia icon within a neoliberal popular culture. I argue that our contemporary new media environment, marked by convergent media texts, self-branding, and interactivity, provides an ideal space for Banks to produce and globally circulate her postfeminist star text. Through her websites, Facebook, and Twitter confessionals, Banks is able to successfully navigate the contradictory discourses that insist female celebrities be both “authentic” selves while maintaining a disciplined, hegemonic femininity that becomes legitimized and naturalized. I conclude that while Banks' mobilization of a hypervisibility and sense of individual agency generates an authenticity that may resonate with her fans, she remains contained by the neoliberal and postfeminist discourses that allow her to have such a prominent Internet presence. Consequently, this paper serves to raise unexplored questions about the relationship between celebrity culture, postfeminist and neoliberal subjectivities, and new media.

While feminist media scholars have recognized the growing importance of feminist blogs, such as Jezebel, Racialicious, and Feministe, to contemporary feminism, the contribution of girls to this feminist blogosphere remains understudied. In this paper, the author addresses this research gap by investigating the complex and diverse ways that girls are using blogging communities to participate in a feminist political activism that reflects their needs as contemporary young feminists within a neoliberal cultural context. This analysis draws upon two case studies of popular blogs by teenage feminists, and interviews that were conducted with four girl bloggers who participated in these two communities. The author argues that through the practice of blogging, teenage girls are actively reframing what it means to participate in feminist politics, drawing on opportunities that the Internet provides to embrace new understandings of community, activism, and even feminism itself.

Media critics and feminists have long criticized teen magazines for providing limited substance and promoting a traditional view of femininity. This article challenges this assumption by using a critical discourse analysis to examine the production of girl glossies. Through interviews with four New York teen magazine editors, I unpack some of the contradictions embedded in editors' identifying as feminists while creating a cultural product often deemed anti-feminist. My findings suggest that editors combine practical strategies with a distinctively “third wave ethic” to navigate between corporate and cultural expectations in order to integrate a popular feminism into the magazine content. This third wave ethos however, tends to yield a conception of feminism as primarily a celebration of individual agency, neglecting a larger analysis of structural barriers and power relations. While editors have some success in refocusing teen magazines as sites for individual empowerment, I argue that this is not enough to truly empower teen girls and to challenge inequalities on a societal scale.