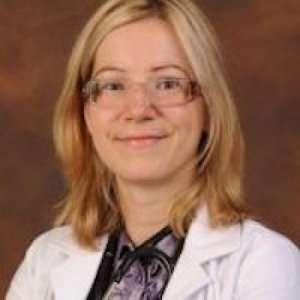 
Dr. Jessica S. Fortin is a board-certified veterinary anatomic pathologist and holds both chemistry and pharmacy licenses from Quebec.

Dr. Jessica S. Fortin joined the Department of Pathobiology and Diagnostic Investigation and the Veterinary Diagnostic Laboratory as an assistant professor at Michigan State University in August 2018. She has several years of experience in medicinal chemistry and molecular pharmacology academic research. Her research program focused on drug discovery. Fortin’s long-time research interests are in the areas of design and development of anti-amyloid agents for the treatment of Alzheimer’s disease, Parkinson’s disease, and type 2 diabetes. Her academic interests are in DNA secondary structures, protein folding disorders, neuropathology, and neurotoxicology.

Fortin is originally from Quebec, Canada. She is a board-certified veterinary anatomic pathologist and holds both chemistry and pharmacy licenses from Quebec. She received a combined DVM-PhD (pathology) degree in 2015 from the University of Montreal and a MSc with honors in medicinal chemistry (2008) from Laval University. In June 2018, she completed a veterinary anatomic pathology residency training program at the University of Missouri.

Diplomate of the American Board of Toxicology (DABT) (professional)

Canadian Journal of Physiology and Pharmacology

2015 Islet amyloid polypeptide (IAPP) has been shown to form amyloid deposits in pancreatic islets, thereby furthering type 2 diabetes disease progression. Further discovery of new molecules is needed to create a diverse set of molecules that impede pancreatic amyloidosis. We have recently designed and synthesized N-phenyl-N′-(2-ethyl)ureas (EU) that are non-cytotoxic small molecules, to evaluate the role of the aryl-substituted moiety on the inhibition of hIAPP fibrillization. Several EUs were tested in vitro for their anti-amyloidogenic activity using the fluorometric ThT assay, the photo-induced cross-linking (PIUCP) assay, and cell survival assay in pancreatic MIN-6 cells. EU-362 and EU-418 were able to significantly inhibit the formation of hIAPP fibrils and protected cells from amyloid cytotoxic effects. Our results suggest that increasing the nucleophilic potency of the aryl moiety significantly enhances the anti-amyloidogenic activity of the molecules.

2015 Amyloid can be detected in the islets of Langerhans in a majority of type 2 diabetic patients. These deposits have been associated with β-cell death, thereby furthering diabetes progression. Islet amyloid polypeptide (IAPP) amyloidogenicity is quite variable among animal species, and studying this variability could further our understanding of the mechanisms involved in the aggregation process. Thus, the general aim of this study was to identify IAPP isoforms in different animal species and characterize their propensity to form fibrillar aggregates. A library of 23 peptides (fragment 8–32) was designed to study the amyloid formation using in silico analysis and in vitro assays. Amyloid formation was impeded when the NFLVH motif found in segment 8–20 was substituted by DFLGR or KFLIR segments. A 29P, 14K and 18R substitution were often present in non-amyloidogenic sequences. Non-amyloidogenic sequences were obtained from Leontopithecus rosalia, Tursiops truncatus and Vicugna pacos. Fragment peptides from 34 species were amyloidogenic. To conclude, this project advances our knowledge on the comparative pathogenesis of amyloidosis in type II diabetes. It is conceivable that the additional information gained may help point towards new therapeutic strategies for diabetes patients.

2014 Herein, we report a 25‐year‐old male polar bear suffering from a pancreatic islet cell tumor. The aim of this report is to present a case of this rare tumor in a captive polar bear. The implication of potential risk factors such as high carbohydrate diet or the presence of amyloid fibril deposits was assessed. Necropsy examination revealed several other changes, including nodules observed in the liver, spleen, pancreas, intestine, and thyroid glands that were submitted for histopathologic analysis. Interestingly, the multiple neoplastic nodules were unrelated and included a pancreatic islet cell tumor. Immunohistochemistry of the pancreas confirmed the presence of insulin and islet amyloid polypeptide (IAPP) within the pancreatic islet cells. The IAPP gene was extracted from the paraffin‐embedded liver tissue and sequenced. IAPP cDNA from the polar bear exhibits some differences as compared to the sequence published for several other species. Different factors responsible for neoplasms in bears such as diet, infectious agents, and industrial chemical exposure are reviewed. This case report raised several issues that further studies may address by evaluating the prevalence of cancers in captive or wild animals.

2008 1-(2-Chloroethyl)-3-(4-cyclohexylphenyl)urea (cHCEU) has been shown to abrogate the presence of thioredoxin-1 into the nucleus through its selective covalent alkylation. In the present letter we have evaluated the structure–activity relationships of the substituents at positions 3 and 4 of the phenyl ring of cHCEU derivatives on cell cycle progression and thioredoxin-1 nuclear translocation. Active CEU derivatives exhibited GI50 ranging from 1.9 to 49 μM on breast carcinoma MCF-7, skin melanoma M21, and colon carcinoma HT-29 cells. On one hand, compounds 1, 2, 9c, 10c, 13, and 14 arrested the cell cycle in G2/M phase while CEUs 3, 4, 5c, 6c, 11c, and 12c blocked the cell division in G0/G1 phase. On the other hand, CEUs 2–4, 5c, 7c, 8c, 11c, and 12c abrogated the translocation of thioredoxin-1 while the other CEU derivatives were inactive in that respect. Our results suggest that CEU substituted on the phenyl ring at position 3 or 4 by lower cycloalkyl or cycloalkoxy groups arrest cell progression in G0/G1 phase through mechanism of action different from their antimicrotubule counterparts, presumably via thioredoxin-1 alkylation and modulation of its activity. The mechanism of action of these new molecules is still undetermined. However, the significant accumulation of cells in G0/G1 phase suggests that these molecules may act similarly to known chemopreventive agents against cancers. In addition, the inhibition of Trx-1 nuclear localization also suggests the abrogation of an important chemoresistance mechanism towards a variety of chemotherapeutic agents.