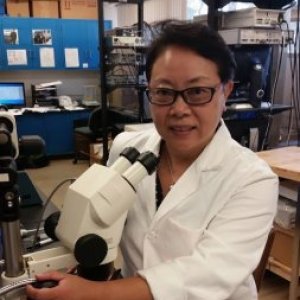 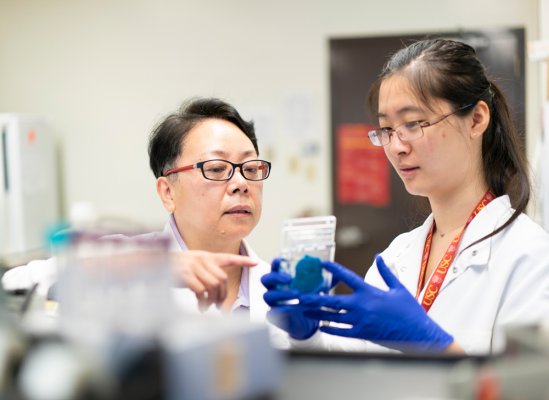 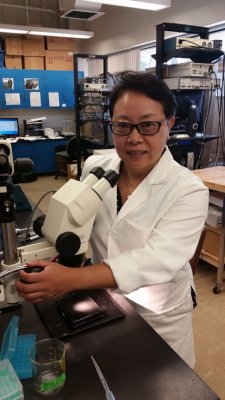 Dr. Liang has led her team and identified a flavonoid compound dihydromyricetin (DHM), purified from herbal medication—Hovenia as a candidate for medication for Alzheimer’s disease. Dr. Liang's team found that DHM has a high efficacy on Alzheimer's disease compared with FDA approved medications, such as Memantine. DHM can restore functional GABAergic synapses as well as improve recognition and memory/learning abilities. Notably, based on WHO 2016 report, the worldwide prevalence of AD was estimated to be 26.6 million in 2006, and an estimated 107 million individuals worldwide are expected to have AD by 2050. Therefore, this development provides hope for people who are suffering from cognition/memory loss and Alzheimer’s disease or other dementia. Dr. Liang's team identified the Gephyrin-GABAAR pathway as a new mechanism/molecular target for treatment of central nervous system disorders including Alzheimer’s disease, dementia, and Parkinson's disease.

Selected and reported by New Scientist

2012 J. Neurosci. Selected as ‘Hottest Topic in the World’ by ScienceNews and ‘Faculty of 1000 Medication’.

Can pedialyte really cure a hangover?

The short answer: No. The only real cure for a hangover is time, says Jing Liang MD, PhD, a professor at USC School of Pharmacy. The longer answer: It’s possible Pedialyte could help quell a hangover faster than other so-called panaceas on the market, Dr. Liang says, but you shouldn’t rely on the beverage to improve the consequences of too much alcohol. “Recovery from a hangover is usually just a matter of time,” she says. “Most hangovers are gone within 24 hours.”...

The morning after: 82 labs evolves amid retail push

In anticipation of this expansion, 82 Labs has expanded its staff with several new hires. Lee said the company has built out its in-house product development team, which encompasses areas including regulatory compliance, quality control and formulation. The company has also previously partnered with researchers at the University of Southern California (USC) to fund studies on DHM, the natural flavanoid that serves as Morning Recovery’s functional ingredient. Dr. Jing Liang, MD, PhD, a professor at the School of Pharmacy at USC who has published research on DHM, is a partner in 82 Labs...

Having shown the power of an ancient Chinese hangover remedy, Research Professor of Clinical Pharmacy Jing Liang is now determined to unlock the mysteries of its effectiveness. The answers she finds could lead to potential Alzheimer’s disease treatments and treatments for Parkinson’s, post-traumatic stress disorder, anxiety and more...

Lee was on a trip to Korea, he said, when he noticed locals downing locally made hangover drinks after a hard night on the town – and “showing up to work the next day ready to go.” He partnered with Dr. Jing Liang at the USC School of Pharmacy to create Morning Recovery for 82 Labs Inc., based on a compound found in a Japanese raisin tree...

But not many companies have partnered with universities to research their own tonics. During Lee’s trip to his home country of South Korea, he found that hangover cures were already an established, multi-million product category in Asia. He decided to bring the hangover cure back home, and began working with Dr. Jing Liang, a professor at the School of Pharmacy at the University of Southern California (USC), whose research showed how the active ingredient in many of these drinks— a flavonoid from the fruit of the Japanese raisin tree (Hovenia Dulcis)— could counteract the effects of alcohol...

Soon, a preparation containing DHM will be tested for the first time in people. “I would give it to problem drinkers who can’t resist going to the pub and drinking,” says pharmacologist Jing Liang of the University of California, Los Angeles, who led the research team.

New drug lets you enjoy a drink without getting drunk, and wake up without a hangover - at least if you're a rat

'When you drink alcohol with DHM, you never become addicted,' says the lead researcher, Jing Liang in research published in Journal of Neuroscience. The drug appears to work by blocking a brain receptor. Other promising anti-alcohol drugs have targeted the same receptor - but also caused seizures.

I have been a Principal Investigator and more than 20 year experience in the drug development. My research interests have been focusing on the mechanisms of GABAA receptors (GABAARs) and related protein as a target for alcohol actions and treatment of neurodegenerative diseases. I have been a pioneer for developing flavonoid compounds extracted from herbs as a positive modulator of GABAARs. Those flavonoids can be candidate therapeutic for Alzheimer disease. We have established a NOVEL THEORY, impairment of gephyrin-GABAAR pathway to be the underlying mechanisms for Alzheimer's disease. Targeting this pathway, those flavonoids can restore gephyrin levels and restore GABAergic synaptic function, and reverse the pathology of Alzheimer's disease. As the consequence, cognition impairment, learning loss, and anxiety are substantially improved.

2014 Alzheimer's disease (AD) is the leading progressive neurodegenerative disorder afflicting 35.6 million people worldwide. There is no therapeutic agent that can slow or stop the progression of AD. Human studies show that besides loss of cognition/learning ability, neuropsychological symptoms such as anxiety and seizures are seen as high as 70 and 17 % respectively in AD patients, suggesting dysfunction of GABAergic neurotransmission contributes to pathogenesis of AD.

2014 Fetal alcohol exposure (FAE) can lead to a variety of behavioral and physiological disturbances later in life. Understanding how alcohol (ethanol, EtOH) affects fetal brain development is essential to guide the development of better therapeutics for FAE. One of EtOH's many pharmacological targets is the γ-aminobutyric acid type A receptor (GABAAR), which plays a prominent role in early brain development.

2012 Alcohol use disorders (AUDs) constitute the most common form of substance abuse. The development of AUDs involves repeated alcohol use leading to tolerance, alcohol withdrawal syndrome, and physical and psychological dependence, with loss of ability to control excessive drinking. Currently there is no effective therapeutic agent for AUDs without major side effects.