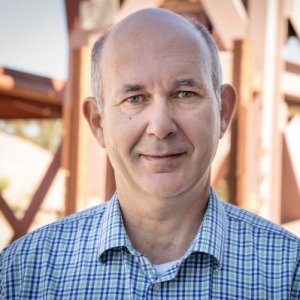 
Joel Conte specializes in the design of safer and more economic structures, especially regarding earthquakes. 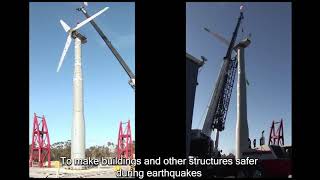 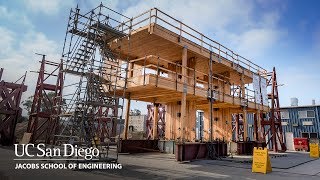 Conte is the principal investigator for UC San Diego's NSF-funded shake table, the largest outdoor shake table in the world.

His research leads to the design of safer and more economic structures, especially regarding earthquake hazards. He is also developing methods based on sensor arrays and system identification techniques to detect and identify sudden hidden damage or progressive deterioration in civil infrastructure systems.

Earthquake simulator at UC San Diego to get major upgrades

The "shake table" at UC San Diego will soon be able to move just like a real earthquake, thanks to a grant from the National Science Foundation. Researchers at UC San Diego received $16.3 million for upgrades to the machine. "This would become one of the very best centers for earthquake engineering worldwide," says Professor Joel Conte, who teaches in the school's Department of Structural Engineering...

"We will be able to reproduce earthquake motions with the most accuracy of any shake table in the world," said Professor Joel Conte, in the Department of structural engineering at UC San Diego, and principal investigator for the NSF upgrade grant...

UC San Diego’s earthquake simulator at Scripps Ranch will soon give engineers a better sense of the fury released when quakes erupt in places around the globe from the San Fernando Valley to the mountains of Afghanistan. The National Science Foundation recently gave the university $16.3 million to upgrade the so-called shake table so it can more accurately simulate quakes, officials said. “We will be able to reproduce earthquake motions with the most accuracy of any shake table in the world,” said Joel Conte, the UC San Diego structural engineer who is overseeing the project.

For the past year, Tara Hutchinson has been trying to figure out what will happen to a tall building made from thin steel beams when “the big one” hits. To do that, she has erected a six-story tower that rises like a lime-green finger from atop a shrub-covered hill on the outskirts of San Diego, California. Hundreds of strain gauges and accelerometers fill the building, so sensitive they can detect wind gusts pressing against the walls. Now, Hutchinson just needs an earthquake. In most of the world, this would be a problem. Even here, where a major fault runs right through downtown, the last quake of any note struck 6 years ago and was centered in nearby Mexico. But Hutchinson, a structural engineering professor at the University of California (UC), San Diego, doesn't need plate tectonics to cooperate. This summer she has an appointment at one of the world's biggest earthquake machines. This device—a sort of bull ride for buildings—is one in a network built around the United States over the past 15 years to advance natural disaster science with more realistic and sophisticated tests. Costing more than $280 million, the National Science Foundation (NSF) initiative has enabled scientists to better imitate some of the most powerful and destructive forces on Earth, including earthquakes, tsunamis, and landslides. “The real world, you cannot count on it,” Conte says. “You cannot say, ‘Oh, I'm going to sit and wait for the next earthquake in front of this big building, and I'm going to invest a lot in sensors.’ You may have to wait 30, 40, 50 years. So you produce an earthquake.”

The world’s largest outdoor earthquake simulator, operated by structural engineers at the University of California San Diego, has received a $16.3 million grant from the National Science Foundation to upgrade the facility to expand its testing capabilities.

2018 This paper presents a new framework for output‐only nonlinear system and damage identification of civil structures. This framework is based on nonlinear finite element (FE) model updating in the time‐domain, using only the sparsely measured structural response to unmeasured or partially measured earthquake excitation...

2017 A methodology is proposed to update mechanics-based nonlinear finite element (FE) models of civil structures subjected to unknown input excitation. The approach allows to jointly estimate unknown time-invariant model parameters of a nonlinear FE model of the structure and the unknown time histories of input excitations using spatially-sparse output response measurements recorded during an earthquake event. The unscented Kalman filter, which circumvents the computation of FE response sensitivities with respect to the unknown model parameters and unknown input excitations by using a deterministic sampling approach, is employed as the estimation tool. The use of measurement data obtained from arrays of heterogeneous sensors, including accelerometers, displacement sensors, and strain gauges is investigated. Based on the estimated FE model parameters and input excitations, the updated nonlinear FE model can be interrogated to detect, localize, classify, and assess damage in the structure. Numerically simulated response data of a three-dimensional 4-story 2-by-1 bay steel frame structure with six unknown model parameters subjected to unknown bi-directional horizontal seismic excitation, and a three-dimensional 5-story 2-by-1 bay reinforced concrete frame structure with nine unknown model parameters subjected to unknown bi-directional horizontal seismic excitation are used to illustrate and validate the proposed methodology. The results of the validation studies show the excellent performance and robustness of the proposed algorithm to jointly estimate unknown FE model parameters and unknown input excitations.

2013 This paper presents a study on the identification of progressive damage, using an equivalent linear finite-element model updating strategy, in a masonry infilled RC frame that was tested on a shake table. A two-thirds-scale, 3-story, 2-bay, infilled RC frame was tested on the UCSD–NEES shake table to investigate the seismic performance of this type of construction. The shake table tests induced damage in the structure progressively through scaled historical earthquake records of increasing intensity...

2011 This paper is a companion to “Displacement-Based Method of Analysis for Regular Reinforced-Concrete Wall Buildings: Application to a Full-Scale 7-Story Building Slice Tested at UC–San Diego” and presents key results obtained from a full-scale 7-story reinforced concrete building slice built and tested on the George E. Brown Jr. Network for Earthquake Engineering Simulation Large Outdoor High-Performance Shake Table at the University of California, San Diego. The building was tested in two phases. This paper discusses the main test results obtained during Phase I of the experimental program...

2010 A full-scale seven-story reinforced concrete building section was tested on the UCSD-NEES shake table during the period October 2005–January 2006. The shake table tests were designed to damage the building progressively through four historical earthquake records. At various levels of damage, ambient vibration tests and low-amplitude white noise base excitations with root-mean-square accelerations of 0.03 g and 0.05 g were applied to the building, which responded as a quasi-linear system with parameters evolving as a function of structural damage...