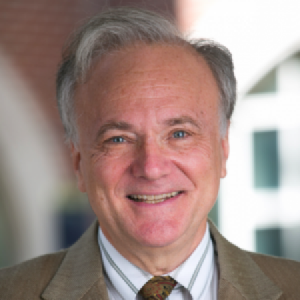 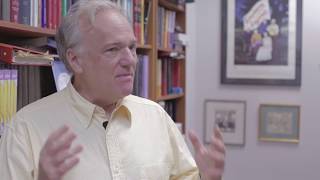 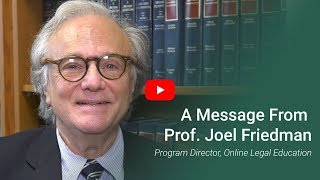 His biography of the late federal Judge John Minor Wisdom, Champion of Civil Rights, was published by LSU Press in 2009.

Friedman has published law review articles on employment discrimination law and labor law and has served as a consultant to the Louisiana Legislature on equal employment opportunity, child abuse and gender-neutral insurance rating. He also has assisted in Tulane’s international outreach: He currently directs the Law School’s summer Institute of Chinese Law and Business Transactions and is working to create joint degree programs with several Chinese law schools.

Zurik: Are a lawmaker’s actions helping his employer or constituents?

“There may be nothing wrong with the legislation. And it’s not unlawful for him to do this, It’s not even a violation of the ethics code in the legislature but it smells. It’s double dealing,” said Tulane Law Professor Joel Friedman.

"If it smells like a fish, it may very well be a fish, and there's a smell here," Tulane Law Professor Joel Friedman said.

Petersen's "complete lack of any legal knowledge was, to me, embarrassing, shocking and disqualifying," added Friedman, who's helped instruct nearly every newly confirmed federal district judge in the country over the last 30 years. "I say this not for any political purpose — the president is entitled to reasonable deference to his appointments — but this is ridiculous."

2012 On Friday, August 4, 1961, police officers in Shreveport, Louisiana, arrested four African American freedom riders after the two men and two women refused to accede to the officers’ orders to exit the whites-only waiting room at the Continental Trailways bus terminal. Four thousand miles away, in the delivery room at Kapi’olani Maternity & Gynecological Hospital in Honolulu, Hawaii, Stanley Ann Dunham, a Kansas-born American anthropologist whose family had moved to the island state twenty years earlier, gave birth to the only child that she would have with her first husband, Barack Obama Sr., an ethnic Luo who had come to Hawaii from the Nyanza Province in southwest Kenya to pursue his education at the University of Hawaii. Just over forty-seven years later, on November 4, 2008, their son, Barack Obama II, a mixed-race man who identifies as black, was elected the 44th president of the United States.

2007 The Supreme Court has articulated a doctrinal framework that, if construed and applied properly, provides the lower federal courts with the analytical tools necessary to identify and proscribe workplace rules that compel individuals to adhere to appearance, attire, and behavioral norms that operate to reinforce gendered expectations.1 Since the Supreme Court has ruled that penalizing an individual for failing to conform to gendered norms of behavior constitutes a form of sex-based discrimination,2 one would expect that employees would have achieved some measure of success in challenging such policies.

2004 The following excerpted chapter from a forthcoming biography of Judge John Minor Wisdom serves as a fitting touchstone for this symposium issue. The Essay begins with Judge Wisdom celebrating his forty-ninth birthday on May 17, 1954. On that same day, nearly a thousand miles away, the United States Supreme Court handed down its long-awaited decision in Brown v. Board of Education. The decision would have a remarkable impact on New Orleans and the South and affect Judge Wisdom in ways that were perhaps unknowable on that warm, pre-summer evening. The Essay recounts the remarkable role Judge Wisdom played in implementing the Brown decision in states encompassed by the United States Court of Appeals for the Fifth Circuit. The author catalogues the recalcitrance with which the South received the decision and the remarkable challenges Judge Wisdom and his peers faced in enforcing Brown's mandate. In doing so, the author provides rich analysis and discussion of Judge Wisdom's most important desegregation cases.