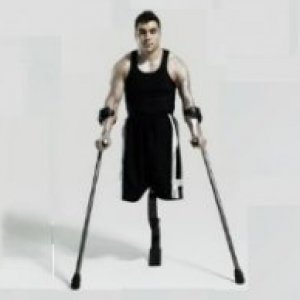 
First and only person in history to run a marathon with no legs. John inspires audiences to overcome adversity.

On August 22nd, 2004 at the age of 17 John was diagnosed with an extremely rare bacterial infection that would change his life forever. With only 35 patients recorded in medical history contracting the disease, John’s fate was dire. Doctors were left with no choice but to amputate his legs and left bicep the night he was diagnosed. John was only given a 20% chance to live, but he survived the effects of the devastating infection.

A mere 5 years after being told by medical and prosthetic professionals that he would never walk again, John is the first and only person in history to run and complete a marathon with no legs.

For years John has spoken to audiences about overcoming adversity, building a positive attitude, leadership, and teamwork. He empowers audiences with his story. He challenges them to reach their goals, raise their personal standards, and expect more out of themselves because he has shown time and time again that anything is possible. From corporate clients to educational institutions John has shown that “How far you fall doesn't determine who you are, it’s how hard you work to get back up.”

First person in history to run a marathon with no legs.

From Tragedy To Triump

John is dedicated to making your event the most enjoyable, uplifting and empowering that it can be. With that in mind, John understands that the needs of his clients will be different depending on its audience members, theme of the event and specific issues that need to be addressed. The main themes of John’s presentations are overcoming obstacles, maintaining a positive attitude, leadership, goal-setting and teamwork. “From Tragedy To Triumph” John will tailor his signature story and the vital