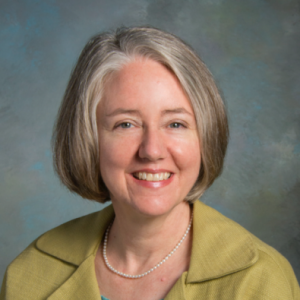 How did early modern Venetians perceive disability? An art history professor whose past research has focused on the history of visual culture in Venice and Florence, Julia DeLancey first became interested in the topic after a conversation with a friend who worked in disability studies.

“I asked her if people in the past defined disabilities the way that people do today, and when she said they didn’t, it was like a lightbulb going off,” said DeLancey, who decided to examine the history of visual culture as it pertains to disabilities in sixteenth-century Venice.

Researching confraternities – organizations supporting laypeople that met for religious devotion – led her to information about those who experienced visual and mobility impairments. Paperwork for a centuries-old court case showed that two confraternities – one for those with visual impairments – had a conflict over a painted altarpiece.

DeLancey’s prior archival research focused on color sellers in early modern Venice, people in the sixteenth and seventeenth centuries who imported, manufactured, bought, sold, and exported a wide array of coloring materials. Pigments and dyes played a central role in the rich, colorful items (including glass and paintings) available in the lagoon city and in the city’s international reputation as a source for beautiful goods of all kinds.

DeLancey joined the University of Mary Washington faculty in 2017, after 22 years teaching art history at Truman State University. At UMW, DeLancey teaches art history surveys and first-year seminars, including one on disability studies. Her courses cover a variety of art historical topics, including ancient Rome; Medieval, Renaissance/early modern, and Baroque art; Dada and World War I; Michelangelo; Leonardo da Vinci (science and art); art and gender; and the theory and historiography of art history.

This summer, DeLancey presented as part of UMW’s COVID-19 in Context course series. She joined colleagues for a three-part talk entitled “Visual Arts and Plagues: Responses from Early Modern Italy, Museums and Zen Buddhism.” DeLancey focused on how Italians in the Renaissance period replied to outbreaks of the bubonic plague.

History of Art in Venice

Governor’s Award for Excellence in Teaching, State of Missouri

Julia DeLancey explains how people with different types of bodies organized and advocated for their rights hundreds of years ago in early modern Venice.

DeLancey Presents Free Lecture on ‘Florence and the Medici,’ Nov. 8

Sponsored by the Fredericksburg-Este Association, Professor of Art History Julia DeLancey presented a free lecture on “Florence and the Medici” at St. George Episcopal Church on Friday, Nov. 8. In the lecture, DeLancey “explored the powerful Medici family and its patronage of the arts and humanism in Renaissance Florence.”

Julia DeLancey (Professor of Art History) presented a paper entitled “The Visual Culture of the Confraternity of the Blind in Early Modern Venice” at the 50th meeting of the Sixteenth Century Studies Conference. The paper, based on new archival research in the Archivio di Stato (state archives) in Venice, explored the activities of a group (confraternity) formed in the fourteenth century so that Venetians with visual impairments could ask for alms in the lagoon city.

Gari Melchers Home and Studio hosted “A Glorious and Beautiful Show,” a richly-illustrated talk on the remarkable visual culture of Renaissance Venice, Italy, presented by UMW Professor of Art History Julia DeLancey on August 25. DeLancey explored the art of such legendary giants as Bellini and Titian and the hand-blown glass and rich textiles for which the city is renowned. Because color was at the heart of all these crafts, DeLancey will also touch upon Venice’s involvement in the trade of coloring materials and the challenges currently faced by the lagoon city in preserving this precious cultural heritage.

2017 Using new archival discoveries made mainly in the Archivio di Stato in Venice, the article places Titian’s portrait of his colleague and supplier into the larger social and artistic context of Renaissance Venice and presents new information about color sellers and their place in Venetian social hierarchy.

'In the Streets Where They Sell Colors': Placing "vendecolori" in the urban fabric of early modern Venice

2011 This article examines the relationship between the color seller (vendecolori or dai colori) trade in Venice in the sixteenth and seventeenth centuries and the urban fabric of the city. It examines the nature of this particularly Venetian of businesses, of the goods in which it deals, and of its guild associations.