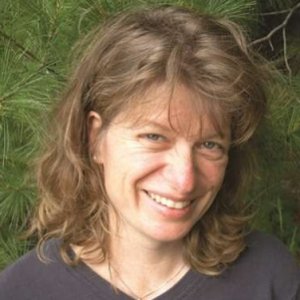 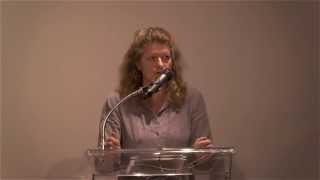 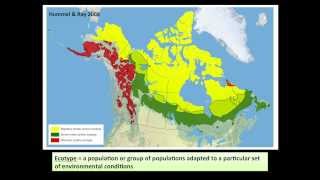 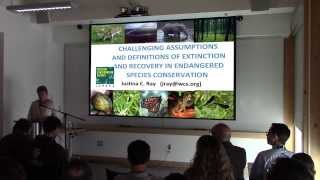 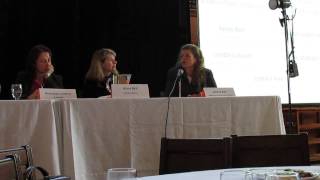 Dr. Justina Ray has led the Wildlife Conservation Society Canada since its incorporation in 2004. In addition to overseeing the operations of WCS Canada, Justina is involved in research and policy activities associated with conservation planning in northern landscapes, with a particular focus on wolverine and caribou. Although Justina worked for years in African and Asian tropical forests, North America has been her predominant geographic focus over the past decade. The questions that drive her research are rooted in evaluating the role of shifting landscapes in biodiversity decline and/or change in forested ecosystems. These issues include quantifying the impacts of development activities on biodiversity, including effects of forest changes on mammal population and community structure, and monitoring of species at risk.

With a certificate in African Studies

What Will Trump’s Oil Drilling Ambitions Mean for the Arctic’s Threatened Caribou?

“Calving grounds for these caribou herd are very, very important,” says Dr. Justina Ray, President and Senior Scientist of the Wildlife Conservation Society of Canada and Co-Chair of the Committee on the Status Endangered Wildlife in Canada, Terrestrial Mammal Species Subcommittee. “This is the most vulnerable time of year for this animal. They come to these places habitually year after year, and drop their calves at a time that coincides with new plant growth, so it’s perfectly matched.” “Those first six weeks of life for calves are critical,” Ray continues. “If you have disturbance in this area, whether it’s noise from exploration or infrastructure, that could increase mortality directly or indirectly because the nutrition of the females is disturbed or they don’t even calve.”...

“These caribou are in trouble,” Justina Ray, co-chair of the Terrestrial Mammals Subcommittee with COSEWIC, a group of cross-country wildlife experts and scientists, told DeSmog Canada. “We did a large analysis of 15 herds, which hasn’t been done before.” Some of these far north caribou herds have experienced population losses of more than 90 per cent over recent decades, slowly caving to the layered pressures of a warmer climate, development, resource extraction and hunting...

"Keeping an eye on the big picture is really important, to see the bigger landscape and understand how this, and other impacts may accumulate over time," said Justina Ray, the president and senior scientist with the Wildlife Conservation Society...

"Many of the great northern caribou herds have now fallen to all-time lows - and there is cause for concern that they will not rebound in the same way they have before," said Justina Ray, co-chair of the terrestrial mammals subcommittee...

"Caribou are, sadly, very sensitive to human disturbances, and we are disturbing caribou more and more," Justina Ray said in a report by the Committee on the Status of Endangered Wildlife in Canada (Cosewic). "These stressors seem to be interacting in complicated ways with rapid warming in the North," she added. "Many of the great northern caribou herds have now fallen to all-time lows, and there is cause for concern that they will not rebound in the same way they have before," according to the committee responsible for making recommendations to the government on the status of wildlife at risk...

2010 While large mammals are often important targets of conservation ­activities in their own right, they can serve as effective tools for designing ­conservation landscapes and management measures at the human–wildlife interface. This chapter explores the potential role of large mammals in conservation planning in the Northern Appalachians/Acadian ecoregion, exploring two major questions: What can we learn from the past about the status of large mammals and the drivers of change, and what can this knowledge tell us about how both to plan for their continued persistence or recovery and to deploy them to help cover at least some of the needs of other, less visible components of biological diversity? An analysis of the individual trajectories of 10 large mammal species over the past four centuries of landscape and climate changes in the Northern Appalachian/Acadian ecoregion reveals several patterns of decline and recovery having occurred against a backdrop of variable environmental conditions such as land-use change, ­climate shifts, ­prevailing human attitudes, and interspecific relationships. Deploying large mammals as conservation planning tools can range from expanding the scale of conservation ambition to guiding the identification of core conservation lands, ­connectivity within the overall landscape, and thresholds of development intensity.

Rescaling the Human Footprint: A tool for conservation planning at an ecoregional scale

2008 Measuring and mapping human influence at the global scale suffers from problems of accuracy and resolution. To evaluate the magnitude of this problem we mapped the Human Footprint (HF) for the Northern Appalachian/Acadian ecoregion at a 90-m resolution using best available data on human settlement, access, land use change, and electrical power infrastructure. Such a map measures the magnitude of human transformation of a landscape, scaled between Human Footprint scores of 0 and 100. Comparison with a 1-km resolution Global Human Footprint map revealed similar spatial patterns of human influence. The correlation between HF scores, however, declined with the size of the area compared, with the rank correlation between ecoregional and global HF scores ranging between 0.67 for 100% of the ecoregion and 0.41 for 0.1% of the ecoregion. This indicates that rescaling the map to a finer resolution leads to improvements that increase as the planning area becomes smaller. The map reveals that 46% of the ecoregion has HF ≤ 20 (compared to 59% in the global analysis) and 34% had HF > 40 (compared to 21% in the global analysis). These results demonstrate the benefit of performing region-scale Human Footprint mapping to support conservation-based land use planning at the ecoregional to the local scale. This exercise also provides a data framework with which to model regionally plausible Future Human Footprint scenarios. These and other benefits of producing a regional-scale Human Footprint must be carefully weighed against the costs involved, in light of the region's conservation planning needs.

2006 Carnivores are difficult to survey due, in large part, to their relative rarity across the landscape and wariness toward humans. Several noninvasive methods may aid in overcoming these difficulties, but there has been little discussion of the relative merits and biases of these techniques. We assess the value of 5 noninvasive techniques based on results from 2 multiyear studies of carnivores (including members of Carnivora and Didelphidae) in New York forests. Two metrics were particularly valuable in assessing the species-specific value of any particular survey technique: latency to initial detection (LTD) and probability of detection (POD). We found differences in the value of techniques in detecting different species. For midsized species (raccoon [Procyon lotor], fisher [Martes pennanti], opossum [Didelphis virginiana], and domestic cat [Felis catus]), camera traps and track-plates were approximately equivalent in detection efficiency, but the potential for wariness toward the survey apparatus resulted in higher LTD for track-plates than for cameras. On the other hand, track-plates detected small carnivores (marten [M. americana] and weasels [Mustela spp.]) more often than cameras and had higher PODs for small and midsized species than did cameras. Cameras were efficient mechanisms for surveying bears (Ursus americanus; low LTD, high POD) but functioned poorly for discerning presence of coyotes (Canis latrans; high LTD, low POD). Scat surveys and snowtracking were the best methods for coyotes, which avoided camera traps and artificial tracking surfaces. Our analysis of fecal DNA revealed that trail-based fecal surveys were inefficient at detecting species other than coyotes, with the possible exception of red foxes (Vulpes vulpes). Genetic analyses of feces and snowtracking revealed the presence of foxes at sites where other techniques failed to discern these species, suggesting that cameras and track-plates are inefficient for surveying small canids in this region. The LTD of coyotes by camera traps was not correlated with their abundance as indexed by scat counts, but for other species this metric may offer an opportunity to assess relative abundance across sites.

2000 Despite increasing pressure to harvest timber from African tropical forests, the short- and long-term ecological effects of qualitative and quantitative variation in extraction practices rarely have been examined. At a site in the southwestern Central African Republic, we surveyed rodent and tree communities and vegetation structure in unlogged forest and along skid trails and secondary and primary access roads at 12 and 19 years after logging. The most important source of variation among transects was the type of logging road: primary and secondary access roads showed the greatest change and skid trails the least. An intercorrelated suite of changes occurred along the margins of the roads, including changes in rodent community composition, increases in rodent abundance and diversity, changes in the height distribution of rodent abundance, increases in understory foliage density, and decreases in sapling density and tree species richness. Ecological changes along the secondary roads were nearly as strong as those along primary roads, despite the fact that secondary roads had been abandoned immediately after logging, whereas primary roads had been traveled up to the time of the research. Continuing edge-induced effects along graded road margins at between 12 and 19 years after logging were indicated by differences in tree species composition, sapling and tree densities, and understory density. Our results support conclusions of increased disturbance to rainforest communities with increasingly destructive road construction techniques and suggest that canopy damage rather than stem damage is the most appropriate measure of logging damage. Although minimizing the length of access roads is important in reducing ecological effects, it should not be achieved at the expense of increased canopy damage. Rodent communities appear to be an easily measured indicator of these ecological changes and may be responsive to landscape-level changes in forest cover and degradation.