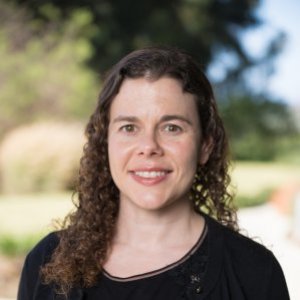 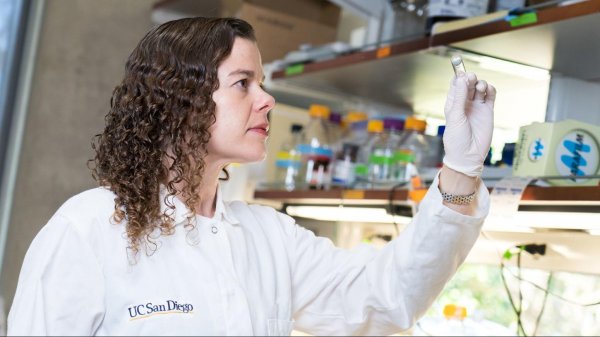 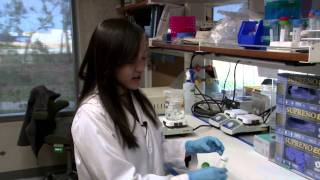 Christman joined the Department of Bioengineering at UC San Diego in 2007 and is a member of the Institute of Engineering in Medicine and the Sanford Consortium for Regenerative Medicine. She is a fellow of the American Heart Association and the American Institute for Medical and Biological Engineering.

CAN YOU CREATE GELS THAT REPAIR HEART ATTACK DAMAGE? Roughly one million Americans suffer heart attacks each year. Many of them are left with scar tissue that makes it harder for their heart to pump. That can lead to death or the need for a heart transplant. Karen Christman might have a remedy. She developed a gel that can be injected in and around such scars, creating scaffolding that attracts new cells. The cells quickly remodel the damaged areas. “We got less scar and more cardiac muscle — at least in animal (models),” said Christman, who is now testing the gel in humans through Ventrix, a company she co-founded. Ventrix recently conducted a successful Phase 1 trial in humans, and is trying to raise money to move to Phase 2. Over the past couple of years, she’s raised $4 million for research from various sources, including the National Institutes of Health.

The statistics are shocking. Almost half of all Americans live with one or more risk factors for a heart attack. Now, bioengineers at the Christman Lab at the University of California, San Diego have created a material that could repair and even reverse the damage done by a heart attack. "A heart attack is a single event where the blood supply is blocked to that downstream tissue," said Karen Christman, a bioengineer at UCSD. When the tissue is deprived of the blood it needs, it becomes damaged. "So we're looking at coming in a month after that process has happened to try and reverse it and prevent further damage," said Christman.

An experimental treatment to repair damage from heart attacks is showing early signs that it may be working in people, the discoverer of the technology said at a major biomedical meeting in La Jolla. “So far we have complete followup data on two patients, and both did show signs of improved cardiac function,” Karen Christman, scientific founder of San Diego’s Ventrix, said Thursday at the Cell & Gene Meeting on the Mesa.

The Christman Lab at UC San Diego focuses on developing novel biomaterials for tissue engineering and regenerative medicine applications. The lab has a strong translational focus with the main goal of developing minimally invasive therapies for cardiovascular disease. Projects are highly interdisciplinary and involve collaborations with basic scientists, engineers, and physicians.

Compositions and methods for cardiac therapy

Compositions and methods for tissue repair with extracellular matrices

The goal of this proposal is to develop degradable enzyme responsive polymeric nanoparticles for treating acute myocardial infarction.

The goal of this proposal is to examine the potential for extracellular matrix based hydrogels for treating acute myocardial infarction, and ischemic and non-ischemic heart failure.

The goal of this proposal is to generate cGMP material, perform safety studies, and plan a Phase I clinical trial to prepare for a pre-IND meeting for using a skeletal muscle ECM hydrogel in peripheral artery disease patients.

The goal of this proposal is to examine the potential for extracellular matrix based hydrogels for treating pelvic floor muscles.

The goal of this proposal is to examine the potential for extracellular matrix based hydrogels for treating damaged rotator cuff muscles.

2013 Biochemical and biomechanical extracellular matrix (ECM) cues have recently been shown to play a role in stimulating stem cell differentiation towards several lineages, though how they combine to induce adipogenesis has been less well studied. The objective of this study was to recapitulate both the ECM composition and mechanical properties of adipose tissue in vitro to stimulate adipogenesis of human adipose-derived stem cells (ASCs) in the absence of exogenous adipogenic growth factors and small molecules. Adipose specific ECM biochemical cues have been previously shown to influence adipogenic differentiation; however, the ability of biomechanical cues to promote adipogenesis has been less defined...

2013 Repairing a broken heart takes more than just time—it may also take a special hydrogel material derived from the heart itself. After a heart attack, cells die and are replaced by a thick scar, which cannot pump blood like normal tissue. This results in total heart failure and death in these patients that survive the initial heart attack...

2012 Heart failure following myocardial infarction (MI) impacts millions of people each year in the US. The field of tissue engineering has developed several potential therapies for treating MI including injectable acellular hydrogels. These injectable biomaterials can either be synthetic or naturally derived, and have the potential to be delivered minimally invasively...

2009 Myocardial tissue lacks the ability to significantly regenerate itself following a myocardial infarction, thus tissue engineering strategies are required for repair. Several injectable materials have been examined for cardiac tissue engineering; however, none have been designed specifically to mimic the myocardium. The goal of this study was to investigate the in vitro properties and in vivo potential of an injectable myocardial matrix designed to mimic the natural myocardial extracellular environment. Porcine myocardial tissue was decellularized and processed to form a myocardial matrix with the ability to gel in vitro at 37 °C and in vivo upon injection into rat myocardium. The resulting myocardial matrix maintained a complex composition, including glycosaminoglycan content, and was able to self-assemble to form a nanofibrous structure. Endothelial cells and smooth muscle cells were shown to migrate towards the myocardial matrix both in vitro and in vivo, with a significant increase in arteriole formation at 11 days post-injection. The matrix was also successfully pushed through a clinically used catheter, demonstrating its potential for minimally invasive therapy. Thus, we have demonstrated the initial feasibility and potential of a naturally derived myocardial matrix as an injectable scaffold for cardiac tissue engineering.

Journal of the American College of Cardiology