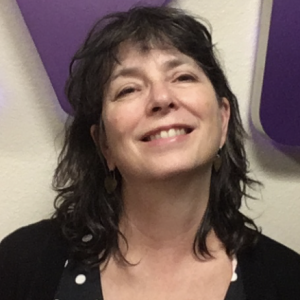 Karen Smalley is an award-winning film editor and Avid Certified Instructor based in Los Angeles. Her work includes narrative, reality and documentary formats for both independent and studio distribution, and has screened at festivals, theaters, and on television and VOD.

Karen holds a BA in Film and an MFA in Film Directing and Editing from UCLA’s School of Theater, Film and Television. She has also taught at CSULB and in the undergraduate and graduate programs at UCLA, as well as their highly rated Summer Institute.

She cut her first feature, a low budget martial arts comedy, shortly after graduating. The following year she edited the feature documentary "Little Joe," which premiered at the Berlin Film Festival, and focuses on the life of Warhol superstar and gay icon Joe Dallesandro.
She is also a proud graduate of the Roger (and Julie) Corman Film School, for whom she edited four features, including the Sony Pictures action thriller Operation Rogue and two Sharktopus features for NBC Universal’s Syfy Channel. While at New Horizons, she also served as post-production supervisor, shepherding multiple films through mastering and delivery, as well as helping keep track of the extensive film library. In addition, she filled in as assistant editor and VFX editor, cutting in as many as 450 VFX shots in a single film.

Among her credits is "Splatter," an interactive web series which was one of Netflix’s earliest productions. It originally streamed for an online audience who voted on which character to kill next, so that the producers—and the editor/director team—were never sure which episode would be broadcast a few days later.

She has also edited numerous short films, including "The Death Strip," which won a Student Emmy Award as well as a DGA award and the Gold Circle Award from the Caucus for TV Producers.

In 2018 she was part of the finishing team of the award-winning documentary feature "Half the Picture," which premiered at Sundance and celebrates the groundbreaking work of female film directors while investigating the systemic discrimination they continue to face.

Most recently she edited "Thrasher Road," an independent feature written, directed, and produced by three of her UCLA MFA classmates. Shot on Super-16mm film, this father-daughter-dog road movie won a Spirit of Independent Filmmaking Award, had a 2019 theatrical release in L.A., and can be viewed on Amazon, Youtube, and other VOD sites.