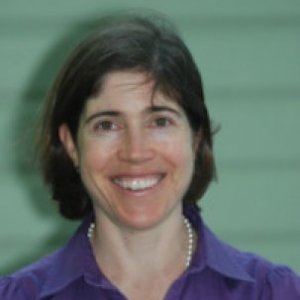 
Kate Detwiler's research focus is on the evolution and conservation of African forest monkeys.

Kate Detwiler is an associate professor of anthropology at Florida Atlantic University, where her research focus is on the evolution and conservation of African forest monkeys. Her primatology lab is based in the Biological Sciences Department and represents an interdisciplinary collaboration between the Anthropology Department in the College of Arts and Letters and the Biological Sciences Department and Environmental Sciences Program in the College of Science. Her lab specializes in studying rare and endangered primate species in the Congo Basin rainforests in the Democratic Republic of the Congo, hybrid monkeys in Gombe National Park in western Tanzania, and a local population of introduced African monkeys living in the mangrove swamps near Fort Lauderdale airport. Detwiler completed her bachelor’s degree in biology at Bates College (1995), where she received the Thomas J. Watson Fellowship upon graduation, later earning her doctoral degree in anthropology at New York University (2010). Prior to arriving at FAU, she was a postdoctoral science fellow at Columbia University in the Department of Ecology, Evolution, and Environmental Biology. She teaches biological anthropology courses to undergraduate and graduate students at FAU, and her work on the discovery of the new monkey species Cercopithecus lomamiensis received wide scale media coverage, including National Geographic, Science Magazine and Nature.

BOCA RATON, Fla. — Iconic scientist and conservationist Dr. Jane Goodall was in Boca Raton on Tuesday to speak on the importance of protecting species and the environment, while encouraging everyone to do their part.

Alempijevic came in to tackle that question by setting up dozens of “multi-strata” camera traps in Lomami National Park and its buffer zone. Nobody knew where to look for the dryas, so he and his mentor, Kate Detwiler, an anthropologist at Florida Atlantic University, decided to place cameras on the ground, in the understory, and up in the canopy, sometimes at a dizzying 30 meters (100 feet) high.

A researcher from Florida Atlantic University is the first to document that two genetically distinct species of guenon monkeys inhabiting Gombe National Park in Tanzania, Africa, have been successfully mating and producing hybrid offspring for hundreds maybe even thousands of years. Her secret weapon? Poop.

Monkey Hybrids Challenge Assumptions of What a Species Is

Decades ago, scientists became curious about individuals with characteristics of both species— the red-tails’ white spots and the blues’ dark fur. For instance, in 1960, when Jane Goodall arrived in Gombe to begin her famous study of the forest’s resident chimpanzee population, she noticed monkeys that she couldn’t quite identify. “We’re pretty sure those were the hybrids,” says Detwiler. “It’s very visual to an observer.” So while researchers knew that the monkeys were probably hybridizing based on their appearance alone, no one had looked at their DNA to determine how many genes had been shared between the species.

Promiscuous monkeys are having sex with other species, research shows

Different Species of Monkeys are Having Sex Now, but Biologists Don't Mind

If a tree falls in a forest and no one is around to hear it, does it still make a sound? Not only does the tree make a sound, so do the creatures inhabiting the forest—or in this case—the rainforest deep in the heart of Africa. Using remote sensing cameras and sound recorders, researchers from Florida Atlantic University are the first to capture rare video footage of a newly discovered population of critically endangered monkeys in one of the most remote regions in the world.

Her professor, Dr. Kate Detwiler, has traveled to Africa to study these same monkeys. Kate Detwiler: "Every time I see monkeys here in South Florida, I am just shocked. I feel like I should be back in "It’s this incredible opportunity to study evolution in action!"

2018 In recent years, hybridization has gained recognition as an important creative force in primate evolution. The exchange of genetic material between species provides genetic novelty on which evolutionary forces, such as natural selection, may act. The guenon radiation (Tribe Cercopithecini) is known for numerous cases of contemporary hybridization—in the wild and captivity—between broadly sympatric species. Interspecific hybrids are viable, and field studies report fertile hybrid females. Despite being a well-documented phenomenon, hybridization among wild guenons is relatively rare and sporadic. An exception is the long-standing hybridization between Cercopithecus mitis doggetti and C. ascanius schmidti in Gombe National Park, Tanzania, where hybrids comprise a significant proportion of the breeding population. Here, I used mitochondrial loci to conduct a genetic survey of the Gombe population and examine the extent and direction of gene flow between the parental species. I extracted DNA from noninvasive fecal samples of unhabituated individuals (N = 144 individuals) with known phenotype and provenance. All parental phenotypes and hybrid individuals were identified in the field based on species specific pelage colors and patterns. Phylogenetic analyses of DNA sequences from inside and outside the hybrid zone show Gombe’s population of C. mitis doggetti is distinct from neighboring conspecific populations in having mitochondrial DNA of C. ascanius schmidti. All animals surveyed from the hybrid zone have one of two haplotypes of C. ascanius schmidti unique to Gombe. These results provide evidence of asymmetric introgressive hybridization between sympatric guenon species, a likely consequence of colonization patterns of the parental species during range expansions. The spatial distribution patterns of the two haplotypes imply that Gombe is a site of both historic and contemporary hybridization between sympatric guenons. The discovery of gene flow and ongoing hybridization between clearly defined species, ecologically distinct enough to coexist in broad sympatry, provides an ideal system to investigate speciation mechanisms in primate adaptive radiations.

2016 The relationship between bats and primates, which may contribute to zoonotic disease transmission, is poorly documented. We provide the first behavioral accounts of predation on bats by Cercopithecus monkeys, both of which are known to harbor zoonotic disease. We witnessed 13 bat predation events over 6.5 years in two forests in Kenya and Tanzania. Monkeys sometimes had prolonged contact with the bat carcass, consuming it entirely. All predation events occurred in forest-edge or plantation habitat. Predator–prey relations between bats and primates are little considered by disease ecologists, but may contribute to transmission of zoonotic disease, including Ebolavirus.

The Efficacy of Sex‐chromosomal Markers in Studies of Cercopithecus hybridization: Discovery of a Captive Hybrid and Applications in Wild Populations

2016 We demonstrate the utility of previously described molecular methods for identifying hybrid Cercopithecus monkeys. Using phylogenetic analyses and DNA sequence comparisons at X‐chromosomal and Y‐chromosomal loci, we have identified a hybrid animal in the Cheyenne Mountain Zoo (USA)—an identification that was not known a priori but was later confirmed by review of zoo records. The molecular techniques employed here are of great use to studies of the genus Cercopithecus because, unlike most mammals, these monkeys frequently form polyspecific associations, and recent deforestation is likely to have driven otherwise low‐level hybridization to higher frequencies which may reduce the fitness of threatened populations. Y‐chromosomal markers are especially informative because they provide working hypotheses for (1) the primary mechanism of hybridization (i.e., species A males × species B females) and, by extension; (2) the major direction of gene flow. Zoo Biol. 35:61–64, 2016. © 2016 Wiley Periodicals, Inc.