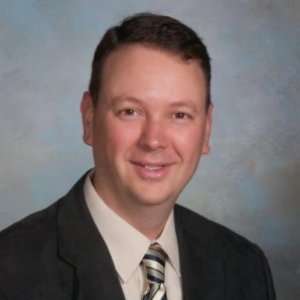 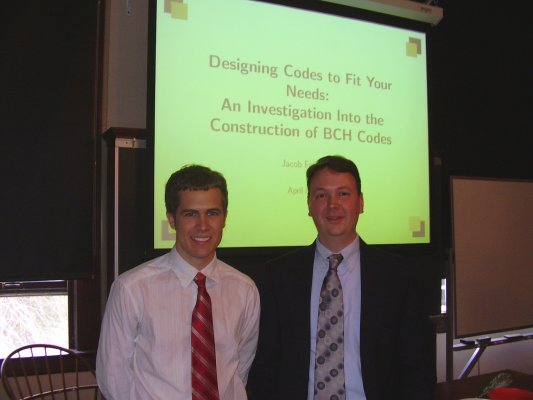 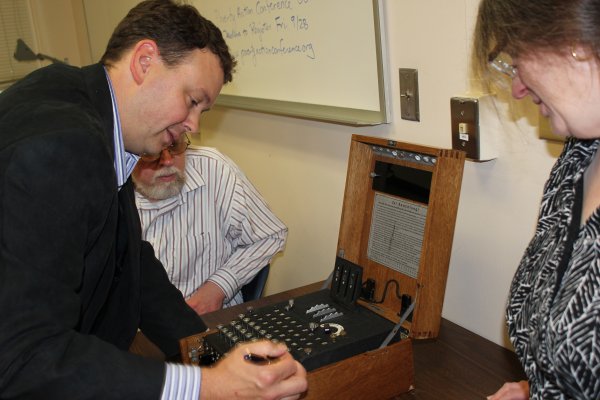 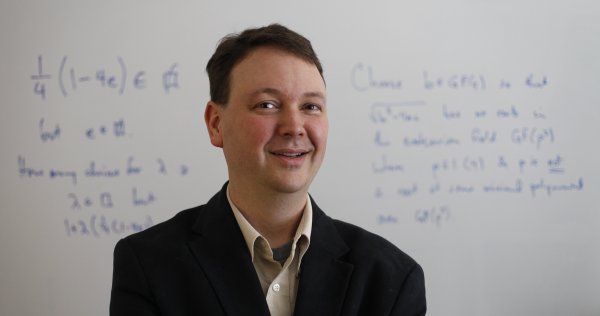 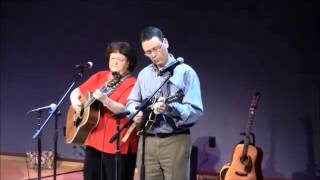 If you appreciate clear cell phone reception and watching a movie on your DVD without annoying static interference, you can thank the mathematics behind error-correcting codes, an area of research by University of Mary Washington Mathematics Professor Keith Mellinger. His work over past decade has led to many advances in coding theory along with other areas of discrete mathematics, his area of expertise. But his work also delves into recreational mathematics and pedagogy, and he is a strong supporter of undergraduate research.

Dr. Mellinger speaks passionately about using mathematics to solve problems. “You’re in a big room and there’s a spider on one wall and on the opposite wall is a fly,” he said. “The question is, if the spider wants to walk along the walls and get to the fly, what’s the shortest path?” This is the question addressed in his article "The Spider and the Fly" which appears in the College Mathematics Journal, a publication of the Mathematical Association of America.
The recipient of many internal grants from UMW, Dr. Mellinger is a Project NExT fellow through the Mathematical Association of America. He has received numerous awards including a young investigator grant from the National Security Agency for his research in finite geometry and coding theory, and a national writing award from the Mathematical Association of America.
He has delivered professional presentations throughout the country and internationally, and has given many talks about the natural link between mathematics and music, his two biggest passions. Dr. Mellinger is an active professional guitarist and performs regionally both as a solo artist and in bluegrass and rock-n-roll bands, playing acoustic guitar and mandolin. In addition to his research and teaching, Dr. Mellinger also manages UMW’s First-Year Seminar Program

Awarded by the Mathematical Association of America’s for the article, “Kirkman’s Schoolgirls Wearing Hats and Walking Through Fields of Numbers,” co-authored with Ezra Brown (VA Tech) and published in Mathematics Magazine

Presented by the University of Mary Washington Alumni Association

BORN ON Christmas Day in 1742 to a family of humble roots, Isaac Newton grew to be regarded by many as the most influential scientist who ever lived.

An email about the walkout from Keith Mellinger, interim dean of UMW’s College of Arts and Sciences, went out to the arts and sciences faculty Tuesday evening. “I want to be sure that you are aware that this is happening and that it is extremely important to many of your students,” Mellinger wrote. “I know we will have faculty and staff who will participate as well. Please be appropriately supportive.”

The following Blueprint Advisory Council members were nominated by their institutions. Keith Mellinger, Dean, College of Arts and Sciences, University of Mary Washington

We find lower bounds on the minimum distance and characterize codewords of small weight in low-density parity check (LDPC) codes defined by (dual) classical generalized quadrangles. We analyze the geometry of the non-singular parabolic quadric in PG(4,q) to find information about the LDPC codes defined by Q (4,q), W(q) and H(3,q2) . For W(q) , and H(3,q2) , we are able to describe small weight codewords geometrically. For Q(4,q) , q odd, and for H(4,q2)D , we improve the best known lower bounds on the minimum distance, again only using geometric arguments. Similar results are also presented for the LDPC codes...

LDPC codes generated by conics in the classical projective plan

We construct various classes of low-density parity-check codes using point-line incidence structures in the classical projective plane PG(2,q). Each incidence structure is based on the various classes of points and lines created by the geometry of a conic in the plane. For each class, we prove various properties about dimension and minimum distance. Some arguments involve the geometry of two conics in the plane. As a result, we prove, under mild conditions, the existence of two conics, one entirely internal or external to the other. We conclude with some simulation data to exhibit the effectiveness of our codes.

The Spider and the Fly

The Spider and the Fly puzzle, originally attributed to the great puzzler Henry Ernest Dudeney, and now over 100 years old, asks for the shortest path between two points on a particular square prism. We explore a generalization, find that the original solution only holds in certain cases, and suggest how this discovery might be used in the classroom.