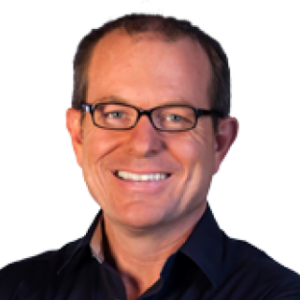 
Morgan Distinguished Professor in Educational Innovations, with focus on creativity, innovation, and learning. 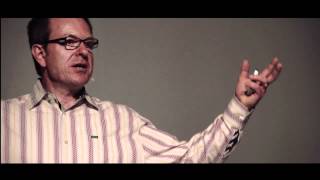 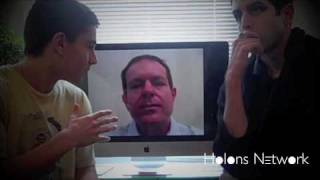 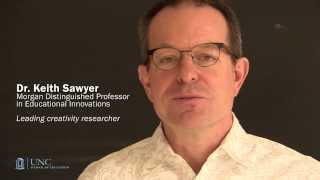 Keith Sawyer is one of the country's leading scientific experts on creativity. His 2007 book Group Genius shows us how to be more creative in collaborative group settings, how to change our organizations for the better, and how to tap into our own reserves of creativity. His 2013 book Zig Zag identifies the eight stages of the creative process, and contains over 100 techniques to enhance your personal creativity.

Keith Sawyer studies creativity, innovation, and learning, with a focus on collaborating groups and teams. He uses qualitative and quantitative methods to examine the conversational dynamics of groups in real-world contexts - whether business meetings, classrooms, or informal learning environments. His research helps us answer questions such as: Which teams are more creative? What team processes result in greater creativity? Which groups are more likely to contribute to more effective learning of the participants? Which organizations and classrooms are most likely to foster effective group interactions?

Sawyer's current approach is inspired by his early empirical studies of the interactional processes in jazz ensembles, improvisational theater groups, and children at play. He connects these phenomena to learning within a theoretical framework, in the tradition of sociocultural psychology and distributed cognition, that he calls "collaborative emergence." He has studied collaborative learning groups in classrooms (including chemistry, computer science, and psychology) and other settings, and collaborative creativity in teacher teams and in business organizations.

In his current research, he is studying how teaching and learning are organized in professional schools of art and design, with the goal of identifying a core set of features that can be used to design more effective learning environments. He conducted ethnographic studies of the Savannah College of Art & Design, and of the Sam Fox School of Design and Visual Art at Washington University in St. Louis.

Dynamics of Collaborating Groups and Teams

Recognition for Excellence in Mentoring (professional)

"A lot of people think creativity is about having that one, big brilliant idea," says Keith Sawyer, professor of educational innovations at UNC Chapel Hill and author of Zig Zag: The Surprising Path to Greater Creativity. "It will be like the heavens opening and the angels singing — and that really isn't the way creativity works. Creative people have tons of ideas, and they don't know yet which one is the right one, or which will work out."...

Entrepreneurship and education come together in new master's program

The director of the program, Keith Sawyer, said the degree is aimed at helping students navigate the world of education and innovation. “The main goal is that students learn how to create new, innovative educational ventures — companies, nonprofits, new types of schools, online learning environments — and we want to ground all of that in the science of how people learn,” he said...

UNC professor of education Keith Sawyer has published 14 books and more than 80 scientific articles on creativity, psychology and more. This afternoon, Sawyer will be at Bull’s Head Bookshop to discuss his book “Zig Zag: The Surprising Path to Greater Creativity,” which focuses on his main areas of research: creativity, collaboration and learning. He talked about “Zig Zag” and the importance of creativity with Daily Tar Heel staff writer Cate Alspaugh...

If You're an Innovator, You Should Be Using Microsoft Windows

Windows 8, released by Microsoft in 2012, is the first new user interface since Xerox PARC created the mouse-and-windows desktop visual metaphor in the 1970s. That was long before we had smartphones and touch screens and the cloud. For Windows 8, instead of incremental innovation, Microsoft chose the path of radical innovation. They asked: What would a user interface look like if we started from scratch? If we designed for touch screens and smartphones and tablets and cloud connected devices, instead of big chunky office computers?...

For starters, thanks to fantastic research done by neuro-psychologist Keith Sawyer at the University of North Carolina, we now know that there are triggers that bring on group flow—many of which were in evidence in yesterday’s game...

Creative insight: The social dimension of a solitary moment

The Systems Model of Creativity

2014 In this chapter we will present a different perspective, by expanding out from this moment in time and embedding it within the other relevant stages of the creative process. When we look at the complete “life span” of a creative insight in our subjects' experience, ...

2006 In the last several decades many of the world's most developed countries have shifted from an industrial economy to a knowledge economy, one based on the creation of knowledge, information, and innovation. Educational researchers have paid very little scholarly ...

2004 Teaching has often been thought of as a creative performance. Although comparisons with performance were originally intended to emphasize teacher creativity, they have become associated instead with contemporary reform efforts toward scripted ...

2003 This article introduces a general sociological readership to multiagent systems (MAS), a new computer simulation technology that has increasingly been used to describe and explain sociological phenomena. The author uses the term artificial societies to refer ...

Emergence in Sociology: Contemporary Philosophy of Mind and Some Implications for Sociological Theory

2001 Many accounts of the micro-macro link use the philosophical notion of emergence to argue that collective phenomena are collaboratively created by individuals yet are not reducible to explanation in terms of individuals. However, emergence has also been invoked by ...