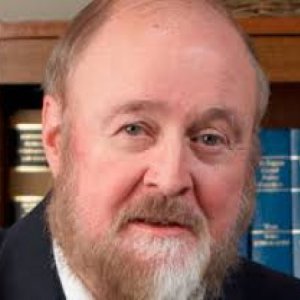 
Expert in free speech, violence in the media

After a distinguished career as a mathematics educator, Professor Saunders turned his attention to the law. He graduated with honors from the University of Michigan Law School in 1984, then clerked for the Honorable Kenneth Starr, U.S. Court of Appeals for the District of Columbia Circuit. He followed with assistant professorships at the University of Arkansas and the University of Oklahoma. During his 16-year tenure at Oklahoma, he rose through the ranks to become a full professor and to serve on the faculties of the graduate school, the College of Liberal Studies, and Film and Video Studies. He was the recipient of four awards at that institution, including the 2001 Regents' Award for Superior Accomplishment in Research and Creative Activity. He also served as Visiting James Madison Chair and Interim Director of the Constitutional Law Center at Drake University. Professor Saunders is the author of two books - Violence as Obscenity: Limiting the Media's First Amendment Protection and Saving Our Children from the First Amendment. He has authored dozens of book chapters, law review articles, and commentaries in legal and popular periodicals. He teaches a variety of courses and seminars on topics in Constitutional Law. Professor Saunders is a member of the Order of the Coif.

Award given by University of Oklahoma

Kevin Saunders, a professor of law and the Charles Clarke Chair in Constitutional Law at Michigan State University, said that the Firearms Owners’ Privacy Act violated the First Amendment because doctors talking to their patients about firearms clearly didn’t fit the exceptions. “The First Amendment, with certain exceptions, gives you freedom to say what you want to say,” Saunders said...

But even if flag-burning became illegal, stripping citizenship as a punishment for a criminal act, as suggested in Trump's tweet on Tuesday, would also be unconstitutional, explains Kevin Saunders, professor of law and Charles Clarke Chair of Constitutional Law at Michigan State University in East Lansing. "The 14th Amendment says that all those born here or naturalized are citizens. Simple violation of a law by a citizen cannot lead to the loss of that citizenship," Dr. Saunders tells the Monitor in an email. "Citizenship may be renounced and may be lost through treason but not for this sort of what amounts to political speech."...

2007 The intent is that, if the dispute arose in a virtual world with courts, the case has to be resolved there; but if there are no courts in that world, jurisdiction is available in a real world court. In application, everything worked well for a while. Everyone had some court to which...

2005 Constitutional law is often a matter of analyzing history and underlying legal principles or philosophical concepts such as equality and human dignity, but there are instances in which facts play a strong to dispositive role. If government infringes on a fundamental right, its...

2004 Spillover violations have been found in the attempts to limit youth access to sexually indecent material on the Internet. Both the Communications Decency Act ("CDA") 5 and the Child Online Protection Act ("COPA") 6 were aimed at legitimate goals but unconstitutionally