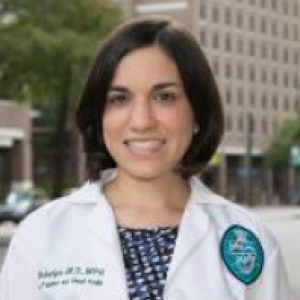 Dr. Mukerjee is a bilingual board certified pediatrician (English/Spanish) and the director for immigrant and refugee health for the department of pediatrics. She also serves as the medical director of the New Orleans Children’s Health Project (NOCHP).
Her area of expertise is in addressing the complex primary care needs of uninsured refugee children primarily from Central America. She has been developing a medical home for these children at a partner clinical site, Crescent Care. Additionally, she engages in local, state and national advocacy on issues related to decreasing health disparities for children. She also supervises residents and medical students at the Tulane general pediatrics clinic where she serves as an Associate Program Director for the Tulane-Ochsner pediatric resident program.

The award recognizes advocacy efforts for children in the state of Louisiana.

2017 In recognition of outstanding advocacy for benefit of children's healthcare

Resident of the Year Award

2015-2016 Given to one graduating resident of the Tulane-Ochsner Pediatric Residency program as voted on by the pediatric residents for exceptional leadership, scholarship and collegiality

Public charge rule is a cruel attack on children

The Trump administration marked this year’s first day of fall with an outrageous new proposal, titled “Inadmissibility on Public Charge Grounds,” that will further harm already vulnerable immigrant children and families. For the first time in our country’s history, an immigrant’s use of public benefits programs like Medicaid, food stamps and Section 8 housing, may become an important criterion of their green card and visa eligibility...

Children grapple with trauma of deportation, as experts struggle to find solutions

Less than a year earlier, the girl was excelling in school, Dr. Kim Mukerjee recalled in a recent interview describing the case. But the girl's performance in school changed when her father was deported by Immigration and Customs Enforcement officials. "She was terrified of becoming further separated from her family by going to school," Mukerjee said. "She had actually witnessed her father be pulled over and arrested by ICE officials."

I work with immigrant and refugee children. Over the past two weeks, I have spent a considerable amount of time sitting and listening to mothers in tears over fear that they will be separated from their children. I have seen young children with worsening school performance, daily headaches and poor appetite because they are feeling increasingly anxious that they will be sent back to their home country from where they fled for their life.