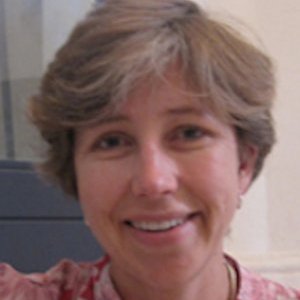 Kirstin Noreen received her Ph.D. from Johns Hopkins University in 1999. With a specialization in medieval art, she has recent publications on the Roman church of Sant'Urbano alla Caffarella, the ritual use of icons, and the revival of Early Christian and medieval art in the sixteenth and seventeenth centuries.

Her current research integrates her interest in Italian medieval and Baroque art by examining the visualization and replication of sanctity during the period of the Counter-Reformation as expressed in the popular resurgence of medieval cult images. Dr. Noreen has received various grants to support her research, including an American Council of Learned Societies, Andrew W. Mellon Fellowship (2004-2005); a National Endowment for the Humanities, Summer Stipend (2004); and a Fulbright Grant for Graduate Study Abroad (1997-1998).

The Ecclesiae militantis triumphi (1583, 1585), a print series reproducing the late-sixteenth-century ambulatory frescoes of Santo Stefano Rotondo, offered Jesuits a concise history of Early Christian persecution through the depiction of martyrdoms from the time of the primitive church. The addition of four allegories not found in the Santo Stefano Rotondo cycle develops the meaning of the print series and links Early Christian sacrifice with theological doctrine established at the Council of Trent. Guided by both text and image, Jesuits could meditate upon the historical litany of martyred saints and at the same time examine, through allegory, the Catholic position on issues such as grace, sin, and justification. For Jesuit missionaries to the Protestant north, the Ecclesiae militantis triumphi pictorially established contemporary Tridentine decisions as worthy of the faith and sacrifice demonstrated by the Early Christian martyrs.

Lay Patronage and the Creation of Papal Sanctity during the Gregorian Reform: The Case of Sant'Urbano alla Caffarella, Rome

This article examines representations of papal sanctity in the late eleventh-century wall paintings of Sant'Urbano alla Caffarella. An analysis of these frescoes, which include the earliest known example of the life of Urban I (d. 230), reaffirms that the ecclesiastical environment of the Gregorian Reform influenced the development of new hagiographic imagery. Cults of Early Christian papal martyrs, such as Urban I, were promoted to support the authority of contemporary popes like Urban II (1088-1099). The frescoes in Sant'Urbano, however, were not the product of papal or ecclesiastical patronage; instead, the images were sponsored by two lay donors, who are pictured in the Crucifixion scene. This pictorial program offers an important index of the extent to which reform ideology permeated various levels of society: artistic commissions came not only from high-level ecclesiastics but also from lay members of the community. The wall paintings in Sant'Urbano demonstrate that any concept of an artistic "platform" at the time of the Gregorian Reform must be broadened to include lay commissions. These frescoes, in which private and public themes converge, illustrate that even seemingly peripheral imagery was informed by the ideals espoused by the ecclesiastical reformers.