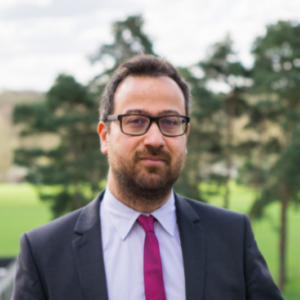 He has had significant project management experience in large energy infrastructure projects.

Konstantinos Chalvatzis is Professor of Sustainable Energy in the Norwich Business School at UEA. His research focuses on energy sector innovation, energy supply security, the role of energy in the sustainability performance of large businesses. His work has attracted major funding from sources including the Interreg France (Channel) England (FCE) EU programme, the Newton Fund and the British Council. He has had significant project management experience in large energy infrastructure projects. Alongside this he has been actively involved in conflict resolution management in energy projects. He has been most active in include the Balkans, Eastern Europe, Caucasus and Northern Africa.

His work with industry (via consulting and industrially funded research) has involved projects with organisations such as OECD, FIAMM, SMA, Systems Sunlight, HEDNO, Schleswig-Holstein, Netz, SAFT, OpenEnergi, AEG, Wipro and Younicos. He also advises civil society organisations such the WWF and BananaLink.

Tourism and hospitality firms that score highly for leadership and cultural values see higher staff satisfaction, according to a new study by the University of East Anglia (UEA).

Cleantech is one part of angel investors’ portfolios

First, it assumes that all “cleantech” investors are equal and driven by the same factors. A recent study, by myself and Professor Konstantinos Chalvatzis, argues exactly the opposite. UK angel investors are driven to invest in this sector for a combination of altruistic, hedonistic and economic motivations.

Co-author Prof Konstantinos Chalvatzis, of Norwich Business School and the Tyndall Centre for Climate Change Research at UEA, said: "Under scrutiny from the public and politicians, the energy sector is changing rapidly. Branding within the energy sector has become increasingly important, as energy firms seek to attract and, importantly, retain customers.

“We need sufficient storage and more investment in storage systems in order for renewable energy to reach its full potential,” said Dr. Konstantinos Chalvatzis, co-author of the paper, in an press statement emailed to The Daily Caller News Foundation. “Subsidies would encourage investment, which in turn would enable further integration of renewables into the energy sector.”

The study, led by Dr Dimitris Zafirakis and Dr Konstantinos Chalvatzis of UEA's Norwich Business School, explored the potential of energy storage systems to return profits by buying when energy is cheap and selling when it is expensive, known as arbitrage. They tested this in a number of European electricity markets and matched various trading strategies and storage technologies with market characteristics.