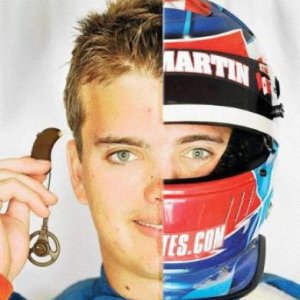 Ask Kris Martin to do something for you and his standard response is “Not a problem.” Stepping in a race car that reaches speeds of over 200 miles per hour. Not a problem. Speaking to over 300 hundred students who look at him as a role model. Not a problem. Being born profoundly deaf. Not a problem. In fact, being born hearing impaired may have helped Kris. He learned to race by primarily using his tactile senses, and has given him a great ability to feel the track and use his instincts. Today Kris is actually able to receive partial hearing through the use of a implant he had surgically implanted when he was 8-years old. A company Phonak Hearing Systems created an audio device that uses radio frequency which allows Kris to communicate with his spotters. The technology was originally created to allow hearing impaired students to hear their teachers properly and not fall behind in class. According to Kris, this device is crucial for racing. “If I can’t hear my spotters, I can’t race.” Years later and many trophies collected Kris is looking to take it to the next level. He has been offered a full ride for Lee Faulk Racing for the 2011 season. This will happen if he is able to find sufficient sponsorship. He certainly has the talent to race and he comes with racing in his blood. Warren Coniam(Uncle) and Doug Syer(Grandfather) are both in the Canadian Racing Hall of Fame. Kris also is strong proponent of giving back to those who are alike himself. A role model for many, Kris speaks to children and charities across North America. His speeches give hope to not only children, but to parents that their children can defy any odds that may be placed against them. 2010 created some exciting moments for Kris including being featured on Discovery Channel’s television show Daily Planet. As exciting as 2010 was for Kris, in 2011 he will be taking it to the next level. Ask him if he is ready. He will tell you...not a problem.