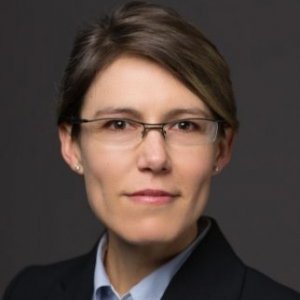 Development of in vitro models

Kristen Mills, an assistant professor of mechanical engineering at Rensselaer Polytechnic Institute, studies the mechanics of cancer and tumor cell invasion, migration, and interactions with the extracellular matrix. Her lab develops new models that mimic aspects of the mechanical environment within the body, providing new insight into solid tumor development and metastasis. Mills earned her bachelors of science in mechanical engineering from the University of California, San Diego, in 1999 before receiving her Ph.D. in mechanical engineering from the University of Michigan in 2008. She was a postdoctoral researcher in the Department of New Materials and Biosystem at the Max Planck Institute for Intelligent Systems, and a lecturer in advanced materials at the University of Ulm, before joining the Rensselaer faculty. Mills received a National Science Foundation Faculty Early Career Development Program (CAREER) Award in 2019, as well as a Department of Defense CDMRP Neurofibromatosis Research Program New Investigator Award. 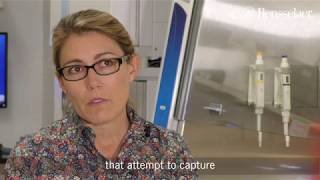 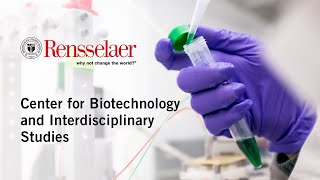 Mechanical engineering and biology are coming together in Troy with the potential to save lives.

Tumor emboli—aggregates of tumor cells within vessels—pose a clinical challenge as they are associated with increased metastasis and tumor recurrence. When growing within a vessel, tumor emboli are subject to a unique mechanical constraint provided by the tubular geometry of the vessel. Current models of tumor emboli use unconstrained multicellular tumor spheroids, which neglect this mechanical interplay. Here, we modeled a lymphatic vessel as a 200 μm-diameter channel in either a stiff or soft, bioinert agarose matrix to create a vessel-like constraint model (VLCM), and we modeled colon or breast cancer tumor emboli with aggregates of HCT116 or SUM149PT cells, respectively. The stiff matrix VLCM constrained the tumor emboli to the cylindrical channel, which led to continuous growth of the emboli, in contrast to the growth rate reduction that unconstrained spheroids exhibit. Emboli morphology in the soft matrix VLCM, however, was dependent on the magnitude of mechanical mismatch between the matrix and the cell aggregates. In general, when the elastic modulus of the matrix of the VLCM was greater than the emboli (EVLCM/Eemb > 1), the emboli were constrained to grow within the channel, and when the elastic modulus of the matrix was less than the emboli (0 < EVLCM/Eemb < 1), the emboli bulged into the matrix. Due to a large difference in myosin II expression between the cell lines, we hypothesized that tumor cell aggregate stiffness is an indicator of cellular force-generating capability. Inhibitors of myosin-related force generation decreased the elastic modulus and/or increased the stress relaxation of the tumor cell aggregates, effectively increasing the mechanical mismatch. The increased mechanical mismatch after drug treatment was correlated with increased confinement of tumor emboli growth along the channel, which may translate to increased tumor burden due to the increased tumor volume within the diffusion distance of nutrients and oxygen.

Ductal carcinoma in situ (DCIS) is a precancerous stage breast cancer, where abnormal cells are contained within the duct, but have not invaded into the surrounding tissue. However, only 30–40% of DCIS cases are likely to progress into an invasive ductal carcinoma (IDC), while the remainder are innocuous. Since little is known about what contributes to the transition from DCIS to IDC, clinicians and patients tend to opt for treatment, leading to concerns of overdiagnosis and overtreatment. In vitro models are currently being used to probe how DCIS transitions into IDC, but many models do not take into consideration the macroscopic tissue architecture and the biomechanical properties of the microenvironment. In this study, we modeled an organotypic mammary duct as a channel molded in a collagen matrix and lined with basement membrane. By adjusting the concentration of collagen (4 and 8 mg/mL), we modulated the stiffness and morphological properties of the matrix and examined how an assortment of breast cells, including the isogenic MCF10 series that spans the range from healthy to aggressive, behaved within our model. We observed distinct characteristics of breast cancer progression such as hyperplasia and invasion. Normal mammary epithelial cells (MCF10A) formed a single-cell layer on the lumen surface, whereas the most aggressive (MCF10CA1) were several cell layers thick. The model captured collagen concentration-dependent protrusive behaviors by the MCF10A and MCF10CA1 cells, as well as a known invasive cell line (MDA-MB-231). The MCF10A and MCF10CA1 cells extended protrusions into the lower collagen concentration matrix, while the MDA-MB-231 cells fully invaded matrices of either collagen concentration but to a greater distance in the higher collagen concentration matrix. Our results show that the model can recapitulate different stages of breast cancer progression and that the MCF10 series is adaptable to physiologically relevant in vitro studies, demonstrating the potential of both the model and cell lines to elucidate key factors that may contribute to understanding the transition from DCIS to IDC.

Stromal collagen is upregulated surrounding a solid tumor and presents as dense, thick, linearized, and aligned bundles. The collagen bundles are continually remodeled during tumor progression, and their orientation with respect to the tumor boundary has been correlated with invasive state. Currently, reconstituted-collagen gels are the standard in vitro tumor cell-extracellular matrix interaction model. The reticular, dense, and isotropic nanofiber (~900 nm-diameter, on average) gels do not, however, recapitulate the in vivo structural features of collagen bundling and alignment. Here, we present a rapid and simple method to fabricate bundles of collagen type I, whose average thickness may be varied between about 4 μm and 9 μm dependent upon diluent temperature and ionic strength. The durability and versatility of the collagen bundles was demonstrated with their incorporation into two in vitro models where the thickness and alignment of the collagen bundles resembled various in vivo arrangements. First, collagen bundles aligned by a microfluidic device elicited cancer cell contact guidance and enhanced their directional migration. Second, the presence of the collagen bundles in a bio-inert agarose hydrogel was shown to provide a route for cancer cell outgrowth. The unique structural features of the collagen bundles advance the physiological relevance of in vitro collagen-based tumor models for accurately capturing tumor cell-extracellular matrix interactions.

The extracellular matrix (ECM) is known to play an important role in the health of cells and tissues. Not only are chemical signals transmitted via bonds and tightly controlled diffusion, but the structure of the ECM also provides important physical signaling for the cells attached to it. The structure is composed of a mesh of fibrous proteins, such as collagen, embedded in a hydrated gel matrix of glycosaminoglycans. To study cell behavior with respect to the combined morphology and mechanics of such matrices is not currently possible with the types of 3D cell culture matrices available. Most of the cell culture matrices are single-phase bio- or polymeric hydrogels. Therefore, here we developed a continuous hybrid manufacturing process to make fiber-reinforced composite hydrogels. A far field electrospinning process was used to deposit the fibrous component with the aid of guiding electrodes; and a gravity-assisted, droplet-based system controlled the rate of addition of the cell-laden hydrogel component. The addition of the fibrous component slightly increased the elastic modulus of the pure hydrogel. The cells that were embedded into the fiber-reinforced hydrogels were viable for 8 days. The cells were randomly placed in the matrix such that some had no contact to the fibers and others were initially in proximity to fibers. The cells with no contact to fibers grew into spheroidal clusters within the hydrogel, and those in proximity to the fibers spread out and grew along the fibers showing that the fiber-reinforced hydrogels are able to control cell behavior with morphological cues.

Large-scale patterning of single cells and cell clusters in hydrogels

Biophysical properties of the extracellular matrix (ECM) are known to play a significant role in cell behavior. To gain a better understanding of the effects of the biophysical microenvironment on cell behavior, the practical challenge is longitudinally monitoring behavioral variations within a population to make statistically powerful assessments. Population-level measurements mask heterogeneity in cell responses, and large-scale individual cell measurements are often performed in a one-time, snapshot manner after removing cells from their matrix. Here we present an easy and low-cost method for large-scale, longitudinal studies of heterogeneous cell behavior in 3D hydrogel matrices. Using a platform we term “the drop-patterning chip”, thousands of cells were simultaneously transferred from microwell arrays and fully embedded, only using the force of gravity, in precise patterns in 3D collagen I or Matrigel. This method allows for throughputs approaching 2D patterning methods that lack phenotypic information on cell-matrix interactions, and does not rely on special equipment and cell treatments that may result in a proximal stiff surface. With a large and yet well-organized group of cells captured in 3D matrices, we demonstrated the capability of locating selected individual cells and monitoring cell division, migration, and proliferation for multiple days.

It is well established that the mechanical environment influences cell functions in health and disease. Here, we address how the mechanical environment influences tumor growth, in particular, the shape of solid tumors. In an in vitro tumor model, which isolates mechanical interactions between cancer tumor cells and a hydrogel, we find that tumors grow as ellipsoids, resembling the same, oft-reported observation of in vivo tumors. Specifically, an oblate ellipsoidal tumor shape robustly occurs when the tumors grow in hydrogels that are stiffer than the tumors, but when they grow in more compliant hydrogels they remain closer to spherical in shape. Using large scale, nonlinear elasticity computations we show that the oblate ellipsoidal shape minimizes the elastic free energy of the tumor-hydrogel system. Having eliminated a number of other candidate explanations, we hypothesize that minimization of the elastic free energy is the reason for predominance of the experimentally observed ellipsoidal shape. This result may hold significance for explaining the shape progression of early solid tumors in vivo and is an important step in understanding the processes underlying solid tumor growth.

Lab on a Chip

A direct fabrication method capable of producing fully-reversible, tunable nanochannel arrays, without the use of a molding step, is described. It is based on tunnel cracking of a readily-prepared brittle layer constrained between elastomeric substrates. The resulting nanochannels have adjustable cross-sections that can be reversibly opened, closed, widened and narrowed merely by applying and removing tensile strains to the substrate. This permits reversible trapping and release of nanoparticles, and easy priming or unclogging of the nanochannels for user-friendly and robust operations. The ease of fabrication and operation required to open and close the nanochannels is superior to previous approaches.

The mechanical properties of a surface-modified layer on polydimethylsiloxane

Surface modification of the elastomer polydimethylsiloxane (PDMS) by exposure to oxygen plasma for four minutes creates a thin, stiff film. In this study, the thickness and mechanical properties of this surface-modified layer were determined. Using the phase image capabilities of a tapping-mode atomic force microscope (AFM), the surface-modified region was distinguished from the bulk PDMS; specifically, it suggested a graded surface layer to a depth of about 200 nm. Load-displacement data for elastic indentation using a compliant AFM cantilever was analyzed as a plate bending on an elastic foundation to determine the elastic modulus of the surface (37 MPa). An applied uniaxial strain generated a series of parallel nanocracks with spacing on the order of a few microns. Numerical analyses of this cracking phenomenon showed that the depth of these cracks was in the range of 300–600 nm and that the surface layer was extremely brittle, with toughness in the range of 0.1– 0.3 J/m2.