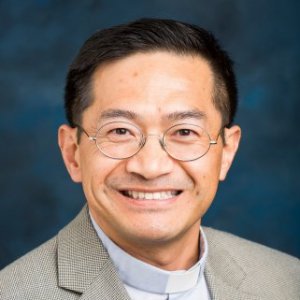 Lân Ngô, S.J. is a lecturer in Asian and Asian American Studies at Loyola Marymount University.

His work experiences included a research laboratory assistant in La Jolla, a high school teacher in Phoenix, and an associate pastor for a multiethnic parish in San Jose. Since 2012, he has presented his papers on the topic of Vietnamese Catholicism at various academic conferences. His latest, “Like Father, Like Sons in the Mother Church: Early History of Vietnamese Clergy Formation and their Spirituality from the Perspective of Sichuan-Gò Thị Synod,” was given at the 2014 Annual Meeting of American Catholic Historical Association.

From his dissertation topic on the role of the local coverts in the nineteenth-century Vietnam, Professor Ngô wants to carry his research further on the development of indigenous Christianity under missionary, colonial, and nationalist pressures.

This is an interdisciplinary study of Asian civilizations to major developments in the histories and cultures of the monsoon region. Topics for discussions in this class will emphasize the intellectual, cultural, social and political factors, which shaped the civilizations of Asia and the Pacific. The course seeks to understand the civilizations of the monsoon region from the Prehistoric era until the period of Europe’s expansion. The Asian countries covered in this course will be mainly of India, China, and Japan. However, research topics and presentations toward the end of the semester will help us to delve deeply into various subject areas chosen by the members of the class.