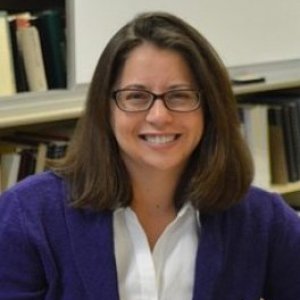 
Lauren McMillan is the University of Mary Washington's resident historical archaeologist and an expert on middle-Atlantic American history.

Lauren McMillan joined the department of Historic Preservation full time in 2017 as the resident Historical Archaeologist. Since 2015, she has been directing UMW’s archaeological and historical investigations at Sherwood Forest Plantation in Stafford County, exploring nearly 200 years of occupation on the property. She was recently awarded a grant from the Council of Virginia Archaeologists to support student research on the African American history at Sherwood Forest Plantation. She has also conducted research and published on the archaeology and history of the 17th-century Potomac River Valley and on the archaeology of clay tobacco pipes. Dr. McMillan was recently awarded a grant from the Virginia Department of Historic Resources to analyze the Nomini Plantation archaeological collections- a 17th-century site that was excavated in the 1970s but was never processed. She has included, and continues to include, undergraduates in both the Sherwood Forest and Nomini Plantation research projects, resulting in several UMW student conference presentations.

Awarded by the Virginia Department of Historic Resources, 2017. Project Title: “Analysis of the Nomini Plantation (44WM0012) Archaeological Collection.” Funds to support one UMW student and one contract laboratory aide focused on collections based research. $4,999.23.

Awarded by the Jamestown Rediscovery-Omohundro Institute of Early American History and Culture, 2016.

Awarded by the Department of Anthropology, University of Tennessee, Knoxville, 2014; $1,500.

Awarded by the Virginia Chapter of the National Society of the Colonial Dames of America, 2013; $1,000.

Awarded in 2013 for Neutron Activation Analysis of white clay tobacco pipes by the University of Missouri's Archaeometry Laboratory; $2,520.

Awarded by the Department of Anthropology, University of Tennessee, Knoxville, 2012; $1,000.

The 72nd annual meeting of the Archeological Society of Virginia, Wytheville, Virginia, 2012.

Dissertation: "Community Formation and the Development of a British-Atlantic Identity in the Chesapeake: An Archaeological and Historical Study of the Tobacco Pipe Trade in the Potomac River Valley ca. 1630-1730".

Thesis: "Put This in Your Pipe and Smoke it: An Evaluation of Tobacco Pipe Stem Dating Methods".

The English landed into a complicated fray of conflict and shifting alliances, said Lauren McMillan, a professor at the University of Mary Washington in Fredericksburg, Va. “They’re all interfighting, and these different groups are trying to use the English against one another,” she said. “The Croatoans perhaps saw the English as a powerful ally and sources of valuable new things.”

"The Blood and Life of a Commonwealth": Illicit Trade, Identity Formation, and Imported Clay Tobacco Pipes in the 17th-century Potomac River Valley.

Material Worlds: Archaeology, Consumption, and the Road to Modernity

2016 There are currently three formula dating techniques available to archaeologists studying 17th- and 18th-century colonial sites with imported white, ball-clay, tobacco-pipe stems. The formulas are based on Harrington’s 1954 histogram of time periods: Binford’s linear formula, Hanson’s ten linear formulas, and the Heighton and Deagan curvilinear formula. Data on pipe stem-bore diameters were collected from 28 sites in Maryland, Virginia, North Carolina, and South Carolina to test the accuracy and utility of the three formula dating methods. The results of this project indicate that current conventional use of Binford’s formula, to the exclusion of the other methods, may be problematic, and that the Heighton and Deagan formula is the most accurate of the three options.

2015 Trade in goods, and the exchange of information and ideas that resulted, was the backbone and lifeblood of early colonial life in the Chesapeake colonies. Clay tobacco pipes are one of the most tangible pieces of evidence of these relationships. Clay pipes comprised almost a quarter of the artifact assemblage at the John Hallowes site (44WM6) in Westmoreland County, Virginia, a fortified house that was occupied from 1647-1681. This article will explore the multiple trade and exchange networks in which the residents of the Hallowes site were engaged using locally-made and imported clay tobacco pipes to understand interactions that occurred at the local, regional, trans-cultural, trans-Atlantic, and trans-national levels

Dating Methods and Techniques at the John Hallowes Site (44WM6): A Seventeenth-Century Example

2014 The John Hallowes site (44WM6) in Westmoreland County, Virginia, was excavated between July 1968 and August 1969. No report of the excavations was completed at that time, although an article summarizing the findings was published in Historical Archaeology in 1971, dating the site’s occupation to the period from the 1680s to 1716. From 2010 to 2012, a systematic reanalysis of the site, features, history, and artifacts was conducted by archaeologists at the University of Tennessee, Knoxville. Benefiting from nearly 40 years of advances in Chesapeake archaeology, the reanalysis has challenged accepted dates for the site’s occupation, which is now placed at 1647–1681. In this article, we will discuss the multiple lines of evidence in support of the newly interpreted date range.

Reassessing the Hallowes Site: Conflict and Settlement in the Seventeenth-Century Potomac Valley

2014 The John Hallowes site in Westmoreland County, Virginia, was excavated from 1968 to 1969. No report of the excavations was completed at that time, although an article summarizing the findings was published in Historical Archaeology in 1971. The artifacts from the site were not systematically cataloged until the 1980s, and it was not until 2010–2012 that an integrated study comparing the artifact data with site features, site history, regional archaeological findings, and regional history was completed. Benefiting from nearly 50 years of advances in Chesapeake archaeology, the reanalysis has challenged accepted dates for the site’s initial occupation, resulted in new interpretations of John Hallowes’s role in the Maryland conflict known as Ingle’s Rebellion, traced political alliances formed during that rebellion that led to the creation of the Potomac River community of Appamattucks, and examined changing ideas about military masculinity on the Chesapeake frontier.

Quarterly Bulletin of the Archeological Society of Virginia

2013 Ker Place (44AC64) is a 19th-century Federal style historic house museum located in Onancock, Virginia. Several archeological investigations have been conducted on the property since it was purchased by the Eastern Shore of Virginia Historical Society in 1960, including the discovery of a refuse midden located underneath the steps of the front porch. This article will present the preliminary results of the analysis of the ceramics from this site. The ceramics will illustrate how the three families who resided at Ker Place during the 19th century were engaged in different consumption patterns, were connected to a global market, and were affected by larger political and economic forces beyond Virginia's Eastern Shore.