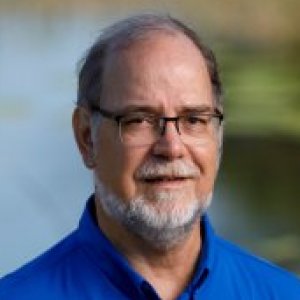 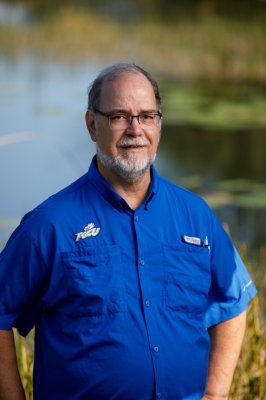 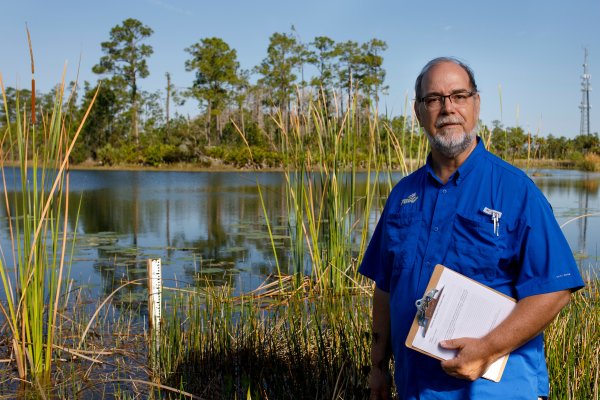 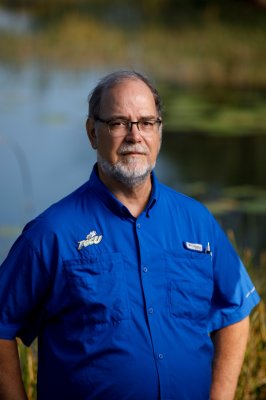 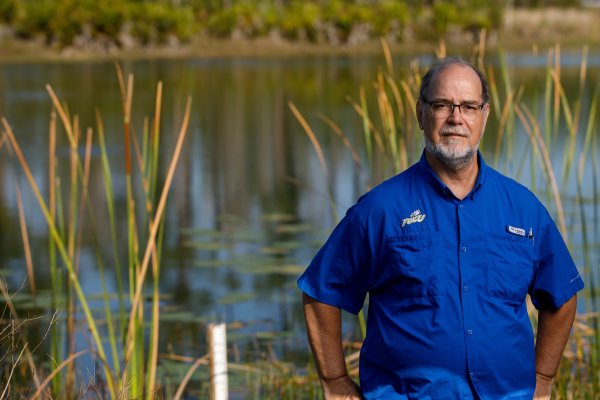 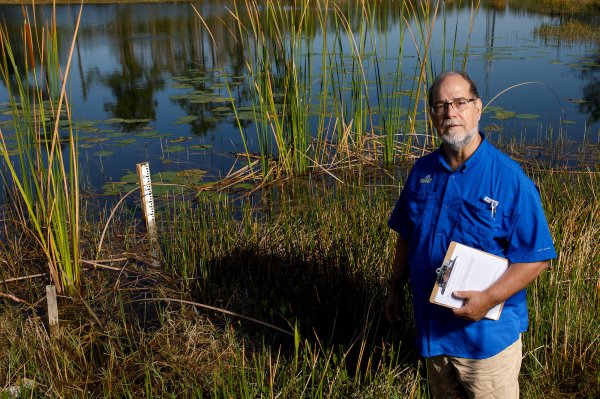 Don Duke is a professor of environmental studies in The Water School at Florida Gulf Coast University. His Ph.D. in Environmental Engineering, and his long history in engineering consulting, agency analyses, and science teaching bring a scientist’s perspective to the policy classes at The Water School. He teaches a cluster of courses in Water Resources Science and Management, for students ranging from neophytes to advanced. His research in water resources analyzes the origins and impacts of pollutants in the water environment, and the policies designed to improve our waters. His favorite research is where he can use data about the environment to assess “from the ground up” the effectiveness of policies and regulations.

Don Duke spent a year teaching sustainability to students at the University of Iceland.

After severe storms in previous years, experts and researchers, including Dr. Don Duke, release a report examining how flooding is impacting rural Pennsylvania.

Proactive Flood and Drought Planning by Local Agencies: Case Studies and Lessons Learned from Around the U.S.

He conducts research into ways to mitigate, reduce, or manage flooding in the U.S., a continuing scourge throughout our nation’s history. Flood damages in the U.S. continue to increase over time. The magnitude and frequency of extreme events appear to be increasing, and the threat to public safety continues to grow, even though there is growing awareness and attention to flood mitigation. In the U.S., the responsibility for flood mitigation is placed squarely on local and municipal governments to identify, seek funding for, implement, maintain, and sustain programs. These programs are, of course, profoundly affected by federal and state policies, regulatory requirements, funding opportunities, and compliance guidance.

Duke's research focus assesses the effectiveness of federal and state policies by investigating the ways in which they promote, alter, or inhibit effective programs, policies, and controls that can be implemented by local entities. He has visited dozens of small- and medium-sized towns – the size of community that in aggregate, year after year, suffers by far the largest amount of property damage, community disruption, and public safety, including multiple deaths annually. He has interviewed, observed, and combed through online records, identifying the actions that appear to succeed and those that do little to protect communities from flooding. The results on the ground are crucial to critiquing federal and state policies. He and his colleagues have produced a number of reports and publications showing examples of effective local policies, and recommending ways that national and state policies could be modified, enhanced, or improved to better protect the nation from flooding disasters.

His other major area of research assesses environmental systems and critically evaluates policies and management decisions at the local, regional, state, and national levels. His favorite form of research is to apply scientific and engineering data, methods, and analyses to critique, improve, and propose new policies and regulations that can better protect human health and the environment. He has conducted this kind of applied, real-world problem-solving for a range of scientific areas, including: watershed-scale studies to quantify or estimate pollutant sources and conditions in the environment; identifying and locating sources of bacteria in near-shore waters (beaches) and in urban / suburban freshwater systems; controlling pollutants in stormwater runoff from industrial facilities and from urban areas; policies for reducing or eliminating hazardous wastes at industrial facilities; and critiquing the availability of data for valuing ecosystem services from natural systems.

Improving the EPA Multi-Sector General Permit for Industrial Stormwater Discharges: A Consensus Study Report of the National Academies of Sciences, Engineering, and Medicine

Industrial stormwater is derived from precipitation and/or runoff that comes in contact with industrial manufacturing, processing, storage, or material overburden and then runs offsite and enters drainage systems or receiving waters. In 1987, Congress significantly expanded the National Pollutant Discharge Elimination System (NPDES) program through amendments to the Clean Water Act to include industrial stormwater runoff conveyed through outfalls directly to receiving waters or indirectly through municipal separate storm sewer systems. The added regulation of stormwater in the NPDES program has been challenging. Stormwater is produced throughout a developed landscape, and its production and delivery are episodic. In 2009, the National Research Council released a comprehensive report on the Environmental Protection Agency’s Stormwater Program that covered all sectors of the program. This study builds on that report, with a focus on industrial stormwater monitoring and management.

Recent changes to the National Flood Insurance Program (NFIP) are critically impacting Pennsylvania because of its history of flooding, its pattern of development along rivers and streams, the age of its structures, and its system of local government. In the Biggert-Waters Flood Insurance Reform Act of 2012, Congress mandated that the Federal Emergency Management Agency (FEMA) adopt “full risk” or “actuarial” rates for flood insurance to address what was then a $20 billion budget shortfall caused by damage from recent storms. This resulted in sharp premium increases, especially for those whose rates had been subsidized. In response, Congress then passed the Homeowner Flood Insurance Affordability Act of 2014, which delayed the rate increases. Despite the 2014 legislation, the move away from subsidized federal flood insurance remains a fundamental shift with profound community-scale impacts across Pennsylvania. At this point, the NFIP officially expired on September 30, 2017; however, it has been extended through a series of continuing resolutions that have also kept the federal government funded. This research explores the impacts of these changes on Pennsylvania’s rural communities in the following ways: reviews the legal and policy framework at a federal, state, local and individual level; examines the demographic and geospatial information associated with flood-impacted communities in Pennsylvania; examines the economic impacts to the housing market in floodplains; and explores how flooding, flood insurance, and other federal and Commonwealth programs have impacted Pennsylvania’s rural communities by focusing closely on eight communities as case studies. The research offers a number of recommendations.

Proactive Flood and Drought Management: A Selection of Applied Strategies and Lessons Learned from Around the United States

The United States has endured an increasing trend of extreme weather over the last decade. According to the National Oceanic and Atmospheric Administration, 2012 was a hallmark year for record-breaking extreme weather events across all 50 states (NOAA, 2012). By August 2012, two-thirds of the country was suffering from the worst drought conditions since the 1930s. Severe conditions led the U.S. Department of Agriculture to declare the largest federal drought disaster in history for more than 1,000 counties across 26 states. (Folger, Cody, and Carter, 2012; NOAA, 2012; USDA, 2012). Effects on Midwestern agricultural states were particularly severe, including costly devastation of corn, sorghum, and soybean harvests (NOAA, 2013). In October 2012, Hurricane Sandy ravaged the East Coast, inundating New Jersey and New York City with floodwaters and a record storm surge, causing more than $70 billion in damages—the second-costliest hurricane in the U.S. history (National Hurricane Center, 2013). However, 2012 only builds on a national history of coping with these water-related disasters. Throughout the 20th century, floods and drought caused more damage and fatalities than any other natural disasters. The 30-year average for annual flood damages is more than $8 billion, with an average 95 deaths per year (National Weather Services, 2012). Similarly, drought impacts total an average $6-8 billion per year, with a significant proportion affecting the agriculture sector (National Drought Mitigation Center, 2010). These damages have sweeping economic and ecological impacts on affected communities and sectors, and as they recover, the assistance they require places a great burden on the national budget. Research suggests that these trends will carry on into the coming decades. Northern states are projected to become wetter and Southern states are expected to become drier, while heavy precipitation events are anticipated to become more frequent and hurricanes in particular are expected to be more intense on average. The country as a whole is expected to get warmer (four to eleven degrees Fahrenheit warmer on average), exacerbating heat waves and drought conditions (USGCRP, 2009). In addition these trends, our aging infrastructure and increased calls to address ecosystem needs provide opportunities for policy makers to re-think their approach to flood and drought.