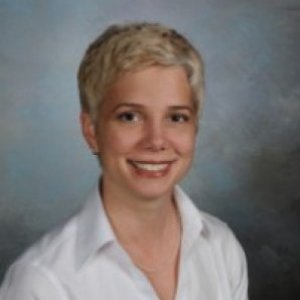 
Leanna Giancarlo is a Professor of Chemistry and commentator on the portrayal of science in media and popular culture.

Leanna C. Giancarlo, Associate Professor of Chemistry, earned a Ph.D. (1996) in physical chemistry from the University of Pennsylvania and a B.S. (1990) in chemistry from the University of Scranton. She was a postdoctoral fellow in the laboratory of Professor George W. Flynn at Columbia University from 1996 to 1999. Her research interests include investigating the self-assembly of physisorbed molecules at the liquid−solid interface using scanning probe microscopy.

In a 2011 interview on the “With Good Reason” public radio program, Giancarlo discussed the negative stereotypes of scientists in film and fiction. She has also supported local initiatives to engage school-aged youth in STEM education.

She is a member of Sigma Xi Scientific Research Society, the Virginia Academy of Science and the American Chemical Society. She is widely published and received a School of Arts and Sciences Dissertation Fellowship at the University of Pennsylvania.

Presented to a full-time faculty member who has between two and five years of full-time teaching service at the University of Mary Washington.

Awarded by the University of Pennsylvania.

Dakota Lawson wants to be a doctor when she grows up. She knows about the cells that make up the human body. She’s done experiments showing reaction rates between molecules at a university lab. Dakota can name bones and knows the difference between states of matter...

Kimberley Hardin’s favorite Harry Potter series character is Hermione Granger—a smart girl like her. Or maybe the brave Harry Potter, himself. But werewolf professor Remus Lupin is one of her favorites, too. Whoever her favorite character is, Kimberley was excited to be sorted into Ravenclaw House Wednesday morning and to attend a potions class—just like she read about in the J.K. Rowling books...

In University of Mary Washington professor Leanna Giancarlo’s physical chemistry lecture last Wednesday, every student paid rapt attention to her expertise in chemical kinetics and quantum mechanics. And when Giancarlo pointed to a chemical equation, asking what it showed, each one of the 20 students in class could answer her query: “a uni-molecular reaction.”...

Western culture reveres science. But scientists have long been portrayed in film and fiction as sinister, ruthless, dangerous, or mad. Think: Dr. Jekyll. Chemistry professor Leanna C. Giancarlo (University of Mary Washington) challenges these portrayals. By looking at the role of language and myth-making, she explains why negative stereotypes of scientists persist.

2013 Damming of the North Anna River in 1972 created Lake Anna, a cooling water source for the Dominion nuclear power plant as well as a popular recreation site in Spotsylvania and Orange counties, Virginia, USA. Previously dated (210-Pb) sediment cores from seven locations within the lake and three locations in the adjoining Waste Heat Treatment Facilities (WHTF) were analyzed for trace metals (Al, Ba, Zn, Cd, Cu, Fe, Mn and Pb) and polychlorinated biphenyls (PCBs) to examine the environmental evolution of the reservoir system. The reservoir has a history of mining activities in its watershed and unusually elevated concentrations of PCBs were found in fish tissues from previous studies. Therefore, dated sediment cores provided the framework for both the temporal and spatial analysis of possible sources and flux histories for both trace metals and PCBs. The trace metals results suggest that, though the upper reaches are relatively less impacted, the old mine tailings from the now ceased mining activities in the watershed of Contrary Creek tributary continue to dominate the sediment chemistry of the lower portion of the lake basin, signified by sediment enrichment of Pb, Cd, Cu, and Zn. Lagoon-2 of the WHTF also seems to be receiving unusually high loadings of Cd (12.5 ± 1.07 μg/g) that is probably associated with waste materials from the nuclear power plant that maintains the lagoons. PCB sediment concentrations were relatively low in the lower sections of the basins with values typically being

Student-Centered Learning: A Comparison of Two Different Methods of Instruction

2004 Student-centered learning is an increasingly important pedagogical approach. Any method that focuses more attention on students' learning than it does on instructors' teaching should benefit the students' understanding of the material. This article describes and compares the use of two different student-centered techniques (Concept Checks and Just-In-Time Teaching) in small undergraduate lecture courses. The use of each technique, ease of development and its utilization, and the benefits to both the student and the instructor are discussed.

2000 When used in conjunction with “chemical marker groups” (functionalities such as −Br and −COOH), scanning tunneling microscopy is a powerful tool for studying the properties of liquid−solid interfaces. Chemical markers serve as “flags” for the identification of interfacial structures, allowing, for example, the absolute chirality of optically active molecules self-assembling on a graphite surface to be determined. Subtle changes in the orientation of these chemical functionalities that affect the long-range order of interfacial films have also been observed and explored. Finally, alterations in self-assembly resulting from variations in adsorbate or substrate structure can be deduced by taking advantage of these STM “flags”.

1998 The imaging and control of self-assembled, physisorbed monolayers have been the subject of numerous scanning tunneling microscopy and atomic force microscopy investigations. The successful interpretation of the structures observed in scanning probe images of molecules self-assembled at liquid-solid and gas-solid interfaces has benefited greatly from recent experimental and theoretical work. These studies are converging on a general tunneling mechanism that accounts for the images of weakly bound, insulating adsorbates. Experiments in which the dynamical behavior of these monolayers has been monitored as a function of time both statically and after the introduction of an external perturbation are described, and novel studies of the selective control of monolayer structure that make use of internal and external electric fields, photons, and solvent coadsorption are reviewed.

1998 Scanning tunneling microscopy (STM) has been used to study the chiral molecules (R)/(S)-2-bromohexadecanoic acid at the liquid/solid interface. When adsorbed onto the basal plane of graphite, these molecules segregate on the surface into domains of pure R or S enantiomers. The atomic resolution obtained in the STM images of these species allows a direct assignment of the chirality of individual molecules.