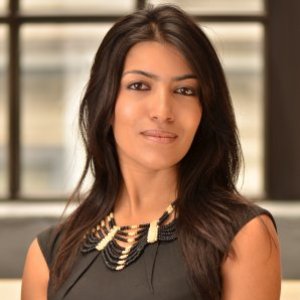 Leila Chirayath Janah is the founder of Samasource, an award-winning social business that connects people living in poverty to microwork — small, computer-based tasks that build skills and generate life-changing income. Janah is a frequent speaker on social entrepreneurship and technology, and her work has been profiled by CBS, CNN, NPR, the BBC, The New York Times, and The New Scientist. She serves on the board of the non-profit TechSoup Global and as an advisor to mobile shopping app Spreetales. She received the World Technology Award for Social Entrepreneurship in 2010, and in 2009 was named one of Fast Company’s Most Innovative Women in Tech.

Prior to Samasource, Janah was a founding Director of Incentives for Global Health, an initiative to increase R&D spending on diseases of the poor, and a management consultant at Katzenbach Partners (now Booz & Co.). She has also worked at the World Bank and as a travel writer for Let’s Go in Mozambique, Brazil, and Borneo.

Janah was a Visiting Scholar with the Stanford Program on Global Justice and Australian National University’s Center for Applied Philosophy and Public Ethics. She received a BA from Harvard and lives in San Francisco.

Leila Janah answers the question, "How was Samasource used in the aftermath of the Haiti earthquake?" http://youtu.be/nfTNTGb0BL0

Leila Janah, founder of Samasource, speaks at TEDxSV December 12th, 2009 about the ability of microwork to alleviate poverty. http://youtu.be/QLREIspthdg