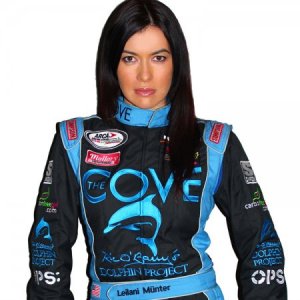 
Never Underestimate a Vegetarian Hippie Chick With a Race Car

Leilani holds a bachelor's degree in Biology specializing in Ecology, Behavior and Evolution from the University of California San Diego. Since 2007, Leilani has been adopting an acre of rainforest for every race she runs. In 2008 she became politically active in the legislative fight for the environment, making several visits to Capitol Hill to speak with members of Congress on behalf of clean energy legislation. Leilani is a long time vegetarian and was one of the first environmental activists to arrive at the BP oil spill in 2010. She has also been to Taiji, Japan twice to document the dolphin slaughter depicted in the Academy Award winning documentary "The Cove."

Leilani races in the ARCA Series, a development league of NASCAR. She is the fourth woman in history to race in the Indy Pro Series, the development league of IndyCar. She set the record for the highest finish for a female driver in the history of the Texas Motor Speedway when she finished fourth in 2006. Her racing accomplishments have landed her on the pages of USA Today, Italian Vogue, Glamour, The New York Times, Reader's Digest, Esquire and Sports Illustrated named her one of the top ten female race car drivers in the world. In 2009 Leilani starred in a national ad campaign for Lucky Brand Jeans with ads appearing in Vogue, Vanity Fair, In Style, W Magazine, and Lucky Brand stores across the country. Her tagline read "Leilani Münter, Saving Rainforests One Race at a Time."

With family ties in the music community – her brother-in-law is Grateful Dead guitarist and singer Bob Weir – Leilani's motto is "Never underestimate a vegetarian hippie chick with a race car." She documents her efforts to go green on her eco site http://carbonfreegirl.com and contributes to the green section of The Huffington Post.

http://leilanimunter.com for details on her many accomplishments and recognitions, including being named the #1 Eco Athlete in the world by Discovery's Planet Green and one of the top ten female race car drivers in the world by Sports Illustrated.

Prior to becoming a professional race car driver and environmental activist, Leilani earned her biology degree in Southern California.

Leilani has given over 45 keynote speeches