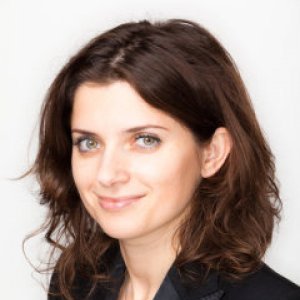 
Lera Boroditsky's research focuses on the relationships between mind, world and language. 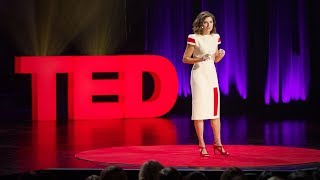 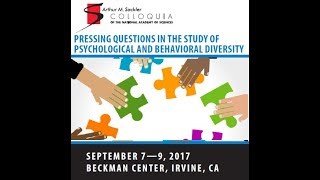 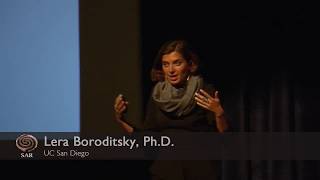 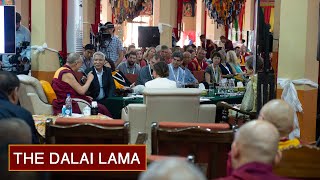 Boroditsky is an associate professor of cognitive science at UC San Diego and editor in chief of Frontiers in Cultural Psychology. She previously served on the faculty at MIT and at Stanford. Her research is on the relationships between mind, world, and language (or how humans get so smart).

She has been named one of 25 Visionaries changing the world by the Utne Reader, and is also a Searle Scholar, a McDonnell scholar, recipient of an NSF Career award, and an APA Distinguished Scientist lecturer. She once used the Indonesian exclusive "we" correctly before breakfast, and was proud of herself about it all day.

Utne Visionary: Selected as one of 25 People Changing the World by Utne Reader

One problem, says Lera Boroditsky, associate professor of cognitive science at UCSD, is that eponyms perpetuate the notion that advances are made by one individual – rather than the long collaborative process central to the process of scientific discovery. She argues for a system “that is not centred around the historical victories of men ‘discovering’ body parts”. Instead, these terms should be replaced by descriptors that are useful and educational to the body’s owner...

Lost In Translation: The Power Of Language To Shape How We View The World

These may seem like minor differences, but Lera Boroditsky, a cognitive science professor at the University of California, San Diego, argues that features like grammatical gender and reading direction can have a real effect on the way we think. "Language can guide you to discover something about the world that might take you longer to discover if you didn't have that information in language," she says. Lera points to studies she and other researchers have done that show language can shape how people think about time, agency, and gender...

Do We Think in Words?

Do we think in words, images, or abstract concepts? We speak to scientists, artists – and a chess player – as we attempt to answer this challenging question from listener Romanie.

Language and the Construction of Time through Space

2018 Speakers of different languages think about time differently in accordance with the spatial metaphors common in their languages. Furthermore, learning new spatial metaphors in language instills new non-linguistic representations of time, suggesting that language can play a causal role in constructing mental timelines.

2017 Language helps people communicate and think. Precise and accurate language would seem best suited to achieve these goals. But a close look at the way people actually talk reveals an abundance of apparent imprecision in the form of metaphor: ideas are ‘light bulbs’, crime is a ‘virus’, and cancer is an ‘enemy’ in a ‘war’. In this article, we review recent evidence that metaphoric language can facilitate communication and shape thinking even though it is literally false. We first discuss recent experiments showing that linguistic metaphor can guide thought and behavior. Then we explore the conditions under which metaphors are most influential. Throughout, we highlight theoretical and practical implications, as well as key challenges and opportunities for future research.

2017 What is the role of language in constructing knowledge? In this article, we ask whether learning new relational language can create new ways of thinking. In Experiment 1, we taught English speakers to talk about time using new vertical linguistic metaphors, saying things like “breakfast is above dinner” or “breakfast is below dinner” (depending on condition). In Experiment 2, rather than teaching people new metaphors, we relied on the left–right representations of time that our American college student participants have already internalized through a lifetime of visuospatial experience reading and writing text from left to right. In both experiments, we asked whether the representations (whether newly acquired from metaphor or acquired over many years of visuospatial experience) are susceptible to verbal interference. We found that (a) learning new metaphors created new space–time associations that could be detected in a nonlinguistic implicit association task; (b) these newly learned representations were not susceptible to verbal interference; and (c) with respect to both verbal and visual interference, representations newly learned from linguistic metaphor behaved just like those on the left–right axis that our participants had acquired through years of visuospatial experience. Taken together, these results suggest that learning new relational language can be a powerful tool in constructing new representations and expanding our cognitive repertoire.

2017 Computational models have shown that purely statistical knowledge about words’ linguistic contexts is sufficient to learn many properties of words, including syntactic and semantic category. For example, models can infer that “postman” and “mailman” are semantically similar because they have quantitatively similar patterns of association with other words (e.g., they both tend to occur with words like “deliver,” “truck,” “package”). In contrast to these computational results, artificial language learning experiments suggest that distributional statistics alone do not facilitate learning of linguistic categories. However, experiments in this paradigm expose participants to entirely novel words, whereas real language learners encounter input that contains some known words that are semantically organized. In three experiments, we show that (a) the presence of familiar semantic reference points facilitates distributional learning and (b) this effect crucially depends both on the presence of known words and the adherence of these known words to some semantic organization.

2017 Can grammatical gender influence how people conceptualize the referents of nouns? Using an implicit measure, we investigated whether such an effect could be found in a task where neither grammatical nor biological gender is highlighted. In the current study, conducted in English, speakers of French, German and Romanian with knowledge of English were asked to generate adjectives they associate with referents of nouns. Afterwards, the gender valence of the adjectives was measured. The results showed that participants generated more feminine adjectives for nouns with majority feminine translations compared to nouns with majority masculine translations. We found a stronger effect of grammatical gender for some semantic categories than for others. Significant effects of grammatical gender were present starting with the 2nd adjective generated by participants (effects were stronger for adjectives generated 2nd and 3rd by participants, as opposed to the 1st adjective).