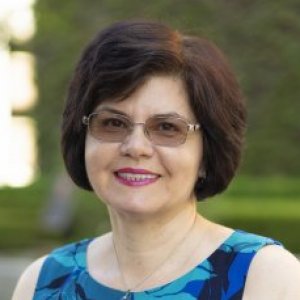 
Liana Asatryan's research focus is the discovery and development of novel compounds for the treatment of alcohol use disorder.

Dr. Liana Asatryan earned her PhD in Biochemistry from the Institute of Molecular Biology, National Academy of Sciences of Armenia. Dr. Asatryan has also completed the Graduate Certificate in Clinical Research Design & Management in Regulatory Science at USC. Currently, she serves as a Research Assistant Professor in the Titus Family Department of Clinical Pharmacy at the USC School of Pharmacy.

In addition to her research responsibilities, Dr. Asatryan lectures in the Undergraduate and MS in Management of Drug Development degree programs within the Regulatory Science program at the USC School of Pharmacy.

Understanding mechanisms of neuro-immune communication and their role in the development of alcohol use disorder (AUD) and other neurological disorders as well as alcohol liver disease. Identification of novel targets for therapeutic strategies to prevent or treat AUD-related inflammation and neuroinflammation. Work in this direction focuses on ligand-gate ion channel, implicated in neuroinflammation and neurodegeneration. The recent development in neuro-immune interactions lies in gut-immune-brain axis communication with a focus on the role of microbiome in AUD and alcoholic liver disease.

2019 Chronic low-grade neuroinflammation is increasingly implicated in organ damage caused by alcohol abuse. Purinergic P2X7 receptors (P2X7Rs) play an important role in the generation of inflammatory responses during a number of CNS pathologies as evidenced from studies using pharmacological inhibition approach. P2X7Rs antagonism has not been tested during chronic alcohol abuse. In the present study, we tested the potential of P2X7R antagonist A804598 to reduce/abolish alcohol-induced neuroinflammation using chronic intragastric ethanol infusion and high-fat diet (Hybrid) in C57BL/6J mice. We have previously demonstrated an increase in neuroinflammatory response in 8 weeks of Hybrid paradigm. In the present study, we found neuroinflammatory response to 4 weeks of Hybrid exposure. A804598 treatment reversed the changes in microglia and astrocytes, reduced/abolished increases in mRNA levels of number of inflammatory markers, including IL-1β, iNOS, CXCR2, and components of inflammatory signaling pathways, such as TLR2, CASP1, NF-kB1 and CREB1, as well in the protein levels of pro-IL-1β and Nf-kB1. The P2X7R antagonist did not affect the increase in mRNA levels of fraktalkine (CX3CL1) and its receptor CX3CR1, an interaction that plays a neuroprotective role in neuron-glia communication. P2X7R antagonism also resulted in reduction of the inflammatory markers but did not alter steatosis in the liver. Taken together, these findings demonstrate how P2X7R antagonism suppresses inflammatory response in brain and liver but does not alter the neuroprotective response caused by Hybrid exposure. Overall, these findings support an important role of P2X7Rs in inflammation in brain and liver caused by combined chronic alcohol and high-fat diet.

Murine Drinking Models in the Development of Pharmacotherapies for Alcoholism: Drinking in the Dark and Two-bottle Choice.

2019 Alcohol Use Disorder (AUD) is a major problem with more than an estimated 76 million people worldwide meeting the diagnostic criteria. Current treatments are limited to three FDA-approved medications that are largely ineffective even when combined with psychosocial intervention, as is evident by the high relapse rate. As such, the search for more novel treatments represents an important public health goal. To this end, the following protocol utilizes two simple rodent drinking models to assess the preclinical efficacy of lead anti-alcohol compounds: two-bottle choice (TBC) and drinking in the dark (DID). The former allows mice to voluntary drink in moderation while the latter induces mice to voluntary consume a large amount of alcohol in a short period that mimics binge drinking. The simple and high throughput nature of both of these paradigms allow for rapid screening of pharmacological agents or for identifying strains of mice that exhibit certain voluntary drinking behavior.

2018 Neuroinflammation is one of the mechanisms leading to neurodegenerative brain damage induced by chronic alcohol (ethanol) exposure. Microglia play a major role in the development of innate immune responses to environmental injuries including ethanol. Adenosine 5″-triphosphate (ATP)-activated purinergic P2X receptor (P2XR) subtypes, P2X4Rs and P2X7Rs, are endogenously expressed in microglia and can modulate their activity. These 2 P2XR subtypes differ pharmacologically and functionally: 1) P2X4Rs are activated at lower (≤0.1 mM) whereas P2X7Rs - at higher (≥1.0 mM) ATP concentrations; 2) P2X4R activation contributes to the release of brain derived neurotrophic factor and its role in tactile allodynia and neuropathic pain is demonstrated; 3) Due to its role in the secretion of pro-inflammatory IL-1β, P2X7Rs have been implicated in the development of neurodegenerative pathologies, pain and morphine tolerance. To date, the roles of individual P2XR subtypes in ethanol effects on microglia and the functional consequences are not completely understood. Based on the existing knowledge on the pharmacological and functional differences between P2X4Rs and P2X7Rs, the present work tested the hypothesis that P2X4Rs and P2X7Rs play differential roles in ethanol action in microglia. Effects of ethanol on P2X4R and P2X7R activity, expression and functional consequences were determined using murine BV2 microglial cells. Ethanol (≥100 mM) inhibited P2X4Rs but was inactive on P2X7 channel activity. Ethanol (25, 100 mM) inhibited P2X4R-mediated microglia migration whereas it potentiated pore formation in P2X7Rs. Furthermore, ethanol (25, 100 mM) potentiated P2X7R-mediated IL-1β secretion from BV2 microglia. Ethanol also induced protein expression for both P2XR subtypes. Overall, the findings identify differential roles for P2X4Rs and P2X7Rs in regards to ethanol effects on microglia which may be linked to different stages of ethanol exposure.

2018 Phospholipids (PLs), key elements of cellular membranes, are regulated reciprocally with membrane proteins and can act as sensors for alterations in physiological or pathological states of cells including initiation and development of cancer. On the other hand, peripheral blood mononuclear cells (MNCs) play an important role in antitumor immune response by reacting to cancerous modifications in distant organs. In the current study, we tested the hypothesis that tumor initiation and development are reflected in the alteration pattern of the MNC PL component. We analyzed MNC membrane PL fractions in samples from healthy individuals and from patients with diverse types of cancers to reveal possible alterations induced by malignancy. Compared to healthy controls, the cancer samples demonstrated shifts in several membrane PL profiles. In particular, when analyzing cancer data pooled together, there were significantly higher levels in lysophosphatidylcholine, phosphatidylcholine, and phosphatidylethanolamine fractions, and significantly lower quantities in phosphatidylinositol, phosphatidylserine, and phosphatidic acid fractions in cancer samples compared to controls. The levels of sphingomyelins and diphosphatidylglycerols were relatively unaffected. Most of the differences in PLs were sustained during the analysis of individual cancers such as breast cancer and chronic lymphocytic leukemia. Our findings suggest the presence of a common pattern of changes in MNC PLs during malignancy.

Preclinical evaluation of avermectins as novel therapeutic agents for alcohol use disorders.

2018 The deleterious effects of alcohol use disorders (AUDs) on human health have been documented worldwide. The enormous socioeconomic burden coupled with lack of efficacious pharmacotherapies underlies the need for improved treatment strategies. At present, there is a growing body of preclinical evidence that demonstrates the potential of avermectins [ivermectin (IVM), selamectin (SEL), abamectin (ABM), and moxidectin (MOX)] in treatment of AUDs. Avermectins are derived by fermentation of soil micro-organism, Streptomyces avermitilis, and have been extensively used for treatment of parasitic infections. From the mechanistic standpoint, avermectins are positive modulators of purinergic P2X4 receptors (P2X4Rs). P2X4Rs belong to P2X superfamily of cation-permeable ion channels gated by adenosine 5'-triphosphate (ATP). Building evidence has implicated a role for P2X4Rs in regulation of ethanol intake and that ethanol can inhibit ATP-gated currents in P2X4Rs. Investigations using recombinant cell models and animal models of alcohol drinking have reported that IVM, ABM, and MOX, but not SEL, were able to antagonize the inhibitory effects of ethanol on P2X4Rs in vitro and reduce ethanol intake in vivo. Furthermore, IVM was shown to reduce ethanol consumption via P2X4R potentiation in vivo, supporting the involvement of P2X4Rs in IVM's anti-alcohol effects and that P2X4Rs can be used as a platform for developing novel anti-alcohol compounds. Taken together, these findings support the utility of avermectins as a novel class of drug candidates for treatment of AUDs.