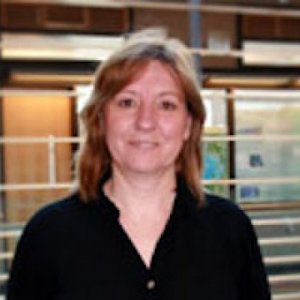 She joined UOIT in 2009 as an Assistant Professor and was appointed Undergraduate Program Director of Chemistry in 2014 for a one-year term, before being named to her current role. Previously, she was a Senior Research Associate in the Graduate Faculty of Chemistry at the University of Guelph. Her research career has spanned more than three decades and as many continents. She moved to Canada from Buenos Aires, Argentina in 2000, after serving as a Research Associate in Inorganic Chemistry, and Analytical and Physical Chemistry in the Faculty of Natural Sciences at the Universidad de Buenos Aires. Her first teaching and research role came as a Visiting Scientist appointment in Physical and Theoretical Chemistry at the University of Oxford in England. Previously, her she spent eight years in industrial research and development focused on applied electrochemistry in the areas of corrosion protective coatings and electrochemical sensors, as well as textile materials at the Instituto Nacional de Tecnologia in Rio de Janeiro, Brazil.

For three years, Dr. Trevani completed work as a Post-Doctoral fellow in Physical Chemistry at Memorial University of Newfoundland.

Hydrogen: Can we close the loop?

Thermodynamic data for the solubility and formation of copper (I) and copper (II) species are required to model innovative designs of the electrolysis cells used in the thermochemical copper-chloride hydrogen production process. Cumulative formation constants of Cu2+ ...

The UV-visible spectra of aqueous o-, m-, and p-nitrophenol were measured as a function of pH at temperatures from 50 to 225° C at a pressure of 7 MPa. These were used to determine equilibrium constants for the acid ionization reaction of each isomer. The new ...

Apparent and standard partial molar volumes of NaCl, NaOH, and HCl in water and heavy water at T= 523 K and 573 K at p= 14 MPa The Journal of Physical Chemistry B

Apparent molar volumes, V ϕ, 2, of aqueous NaCl, NaOH, NaOD, HCl, and DCl in water and heavy water were determined at T= 523 and 573 K and p= 14 MPa with a high-temperature platinum vibrating-tube densimeter in the aquamolality range 0.25≤ m aq≤ 2.5 mol⊙...