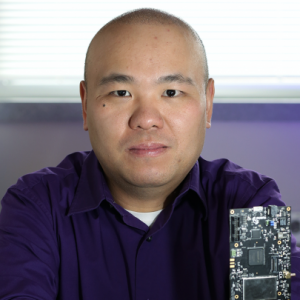 Liran Ma is an Associate Professor in the Department of Computer Science at Texas Christian University. Ma's current research interests include wireless, mobile, and embedded systems, including security and privacy, smartphones, smart health, mobile computing, Internet of Things, and cloud computing. It involves building prototype systems, and conducting real experiments and measurements. He received his D.Sc. degree in Computer Science from The George Washington University.

Hearing Problems? There's an iPhone App for That

"Computer scientist Liran Ma is developing a program to make an iPhone operate as an inexpensive hearing aid..."

An Integrated UAV Platform for Real-Time and Efficient Environmental Monitoring

2019 An important part of environmental monitoring is the collection of meteorological data. In this paper, we develop an integrated data acquisition and transmission platform utilizing unmanned aerial vehicles (UAVs) with an intelligent path planning algorithm to achieve efficient and accurate meteorological data collection in real-time. We adopt the improved traveling salesman problem model to represent the path planning problem. Based on the model, we propose an improved simulated annealing genetic algorithm (ISAGA) to solve the path planning problem. Our proposed ISAGA is able to overcome the deficiencies of the traditional genetic algorithm and simulated annealing algorithm. In addition, we design and implement a mobile application integrated with the path planning algorithm to control UAVs and conduct data exchange to the cloud. Our evaluation results demonstrate that data can be collected and transmitted more efficiently via selecting better paths.

2019 Cooperative jamming is deemed as a promising physical layer-based approach to secure wireless transmissions in the presence of eavesdroppers. In this paper, we investigate cooperative jamming in a two-tier 5G heterogeneous network (HetNet), where the macrobase stations (MBSs) at the macrocell tier are equipped with large-scale antenna arrays to provide space diversity and the local base stations (LBSs) at the local cell tier adopt non-orthogonal multiple access (NOMA) to accommodate dense local users (LUs). In the presence of imperfect channel state information, we propose three robust secrecy transmission algorithms that can be applied to various scenarios with different security requirements. The first algorithm employs robust beamforming (RBA) that aims to optimize the secrecy rate of a marcouser (MU) in a macrocell. The second algorithm provides robust power allocation (RPA) that can optimize the secrecy rate of an LU in a local cell. The third algorithm tackles a robust joint optimization (RJO) problem across tiers that seek the maximum secrecy sum rate of a target MU and a target LU robustly. We employ convex optimization techniques to find feasible solutions to these highly non-convex problems. The numerical results demonstrate that the proposed algorithms are highly effective in improving the secrecy performance of a two-tier HetNet.

2017 In a cognitive radio network, cooperative communications between a primary user (PU) and a second user (SU) may be able to significantly improve the spectrum utilization, and thus, the network performance. To be specific, the PU can select a number of SUs as its relays to cooperatively transmit its data. In turn, these relays can be granted access to the licensed channel of the PU to transmit their data. In this paper, an effective cooperation strategy for SUs is presented. We formulate the problem of cooperative relay selection as a coalition formation game, and develop a utility function based on the game. The utility function considers various factors such as transmission power and noise level. With the utility function, a distributed coalition formation algorithm is proposed, which can be used by SUs to decide whether to join or leave a coalition. Such a decision is based on whether it can increase the maximal coalition utility value. We rigorously prove that our proposed coalition formation algorithm can terminate and reach a stable state. Finally, this paper demonstrates that the proposed scheme is able to enhance the network throughput via a simulation study.

2017 Studies have shown hydroxyfasudil-mediated inhibition of Rho-kinase (ROCK) has efficacy in rodent models of focal ischemia and in in vitro systems that recapitulate stroke conditions. However, the mechanisms underlying the neuroprotective effects of the ROCK inhibitor on stroke are not well understood. In this study, we examined the role of γ-aminobutyric acid (GABA) interneurons in the effects of hydroxyfasudil on transient middle cerebral artery occlusion (tMCAO) induced acute ischemia-reperfusion injury to explore the mechanisms. tMCAO rats developed marked neurological deficits and impaired long-term potentiation; these effects were attenuated by hydroxyfasudil. Expression of GABAA and GABAB receptors after ischemia was decreased to various extents in three brain regions: the cortex, hippocampus, and striatum. Hydroxyfasudil up-regulated expression in the cortex and hippocampus but not in the striatum. Moreover, hydroxyfasudil could suppress the activation of nuclear factor-κB (NF-κB) in these regions during the acute ischemia. We further found that in tMCAO rats, hydroxyfasudil was able to abolish the decrease in GABAA and GABAB receptor phosphorylation triggered by high-frequency stimulation as well as the activation of phosphatase and tensin homolog deleted on chromosome 10 (PTEN). In summary, our results suggest ROCK inhibition improved neurological function and mitigated synaptic plasticity deficits caused by transient focal cerebral ischemia through the inactivation of two distinct pathways: (1) a ROCK-NF-κB pathway that leads to the suppression of GABAA and GABAB expression, and (2) a ROCK-PTEN pathway that decreases the phosphorylation of GABAA and GABAB, thereby affecting receptor function by triggering receptor endocytosis and the degradation of internalized receptors.