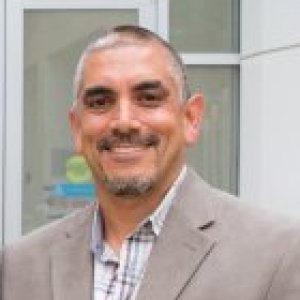 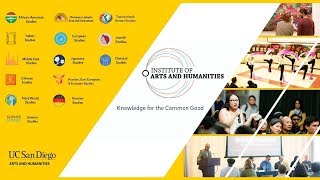 Luis Alvarez is associate professor in the UC San Diego Department of History who serves as the inaugural director of the university’s Institute of Arts and Humanities and the Chicana/o Latina/o Arts and Humanities program. Their research and teaching interests include relational race and ethnicity, popular culture, and social movements in the history of Chicanas/os, Latinas/os, African-Americans, and the U.S.-Mexico Borderlands. Alvarez is the author of “The Power of the Zoot: Youth Culture and Resistance during World War II” and co-editor of “Another University is Possible.” Their publications also include essays in Latino Studies, Aztlan: A Journal of Chicano Studies, Popular Music and Society, Perspectives, French Review of American Studies, OAH Magazine of History, and Kalfou: A Journal of Comparative and Relational Ethnic Studies. They have published essays in “Mexican Americans in World War II,” “Transnational Encounters: Music and Performance at the U.S.-Mexico Border,” “The Struggle in Black and Brown: African American and Mexican American Relations during the Civil Rights Era,” “Globalization and Culture: Volume II” and “Latinos and World War II: Mobility, Agency, and Ideology.”

Alvarez's current projects include "From Civil Rights to Global Justice: Popular Culture and the Politics of the Possible," an investigation of race, pop culture, and social movements in the Americas since World War II, and "Latino Soldiering: Ethnic Politics and Military Service in World War II," which explores the multiracial, gender, and transnational politics of Mexican American and Afro Latino soldiers from boot camp to combat to post war life. Alvarez is also co-editing (with David Gutierrez) "A History of Mexican America." They have won numerous awards for research, teaching, and service including fellowships from the Warren Center for Studies in American History at Harvard University, the Ford Foundation, the University of California’s Office of the President, the Institute for Humanities Research at Arizona State University, the Teaching Excellence Award from the University of Houston, and the Equal Opportunity/Affirmative Action and Diversity Award from UC San Diego.

With professors in the Department of History and Department of Ethnic Studies, Alvarez is a founding faculty member of the UC San Diego Race and Oral History Project, a student-focused initiative to develop a living archive of ethnic- and racial-minority histories in the San Diego region.

Culture Report: What Arts Can Teach Scientists, and Vice-Versa

Luis Alvarez, director of the Institute of Arts and Humanities and a professor of history, used additional UC funding to develop a new oral storytelling initiative, The Race and Oral History Project, dedicated to preserving San Diego’s diverse stories...

As department of history Professor Luis Alvarez puts it in a press release, “The grant will enable us to more effectively advance our vision of bringing students, staff, faculty and community partners together to explore and put into practice the many ways arts and humanities enrich our campus and region.”...

Professor Luis Alvarez talked about the factors that led to the 1943 Los Angeles zoot suit riots. He describes race relations during the World War II era and how youth who wore zoot suits came to symbolize a challenge to conventional gender and racial identities.

UCSD institute hopes to bring humanities out of 'silos'

“One of the reasons for this rise in renewed and continued interest in the humanities is that we’re living in challenging times,” said professor Luis Alvarez, who was appointed in July to be the co-director with professor Mark Hanna of the new Institute of Arts and Humanities...

The L.A. Scene: Teaching Race and Popular Music in the 1950s

2012 In 1956, Little Julian Herrera had one of the biggest rhythm and blues hits of the year in Los Angeles. His soulful, doo-wop style ballad, “Lonely Lonely Nights,” turned Herrera into an overnight sensation. He was soon known across the city for spectacular live performances that later drew comparisons to a young James Brown. He became a teen idol and heartthrob among Mexican American girls on the Eastside. What many of his fans may not have known, however, was that Herrera was neither Mexican American nor from L.A. He was an East Hungarian Jew who had run away from his Massachusetts home at age eleven. His given name was Ezekiel, though his probation officer knew him as Ron Gregory. After hitchhiking to Southern California, he was taken in by a Mexican American family in the Boyle Heights neighborhood of East L.A. and eventually took their surname as his own.

From Zoot Suits to Hip Hop: Towards a Relational Chicana/o Studies

2007 This article traces cultural exchange between Chicana/o and Latina/o, African American, and Asian American youth since World War II, including analyses of zoot suit, civil rights movement art, and hip hop cultures. Drawing on theories of zapatismo as critical cultural practice, I explore how the cultural poetics of racialized youth functioned as a struggle for dignity. Rather than dismiss different youth cultures as too disjointed for any kind of productive dialog, I propose that we listen to what each might teach us about addressing crises of resources and domination in the academy. If Chicana/o, Latina/o, and Ethnic Studies are at crossroads in how they respond to increased funding cutbacks, battles over affirmative action, and the intellectual saliency of “new” fields like Borderlands Studies, I argue that a relational approach to Chicana/o youth culture provides clues to retool the theoretical, methodological, and pedagogical arsenal of these fields to regenerate them as a site of social struggle.