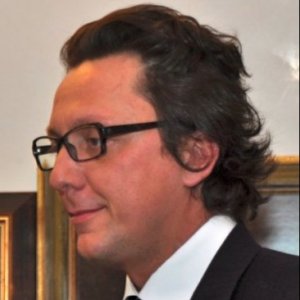 Marco Camisani Calzolari, aged 42, has been involved in the internet sector for 15 years, as an academic studying communication phenomena, as a writer, and as an entrepreneur.
He has founded several companies in Italy and abroad, both in B2B and B2C areas.

Professor at IULM university, he teaches the course on Corporate Communication and Digital Languages in the Communication, PR and Advertising Faculty.

In Italy he is CEO and Founder of Speakage, a company that develops white label web platforms such as Social Networks, WebTV, Social Media, Viral systems and so on, for major international companies. In the UK he founded Digitalground, a company that produces B2C start-ups which have developed successful websites.

He co-authored the book “Impresa 4.0 – Marketing e Comunicazione Digitale a 4 Direzioni” with Franco Giacomazzi, published by the FINANCIAL TIMES. He is a contributor to specialist magazines Nova – Il Sole 24 Ore, ADV, Pubblicità Italia and others.

He taught Digital Marketing and Communication techniques at the Università Statale di Milano until 2010.

He has been involved in digital innovation since 1994, through publications, articles, conferences, lectureships and above all, directly, through his blog and his active presence on social networks.

He has carried out numerous B2C web projects over the course of his 20-year career: the first Italian social network, Internetworkcity; EnergyBank, the world’s first virtual currency; the multiplatform TV/Web talk show www.digitalk.tv; and innovative platforms such as speakageline.com. He also founded the international signature-gathering platform livepetitions.com, now available in 10 countries around the world, with the Italian and French versions (www.firmiamo.it and www.jesigne.fr) leaders in their sector.

He is a member of the board for Innovation in Tourism set up by the Ministry for Tourism.

The present time that someone still calls future: the new digital world and new profession’s ways

The present time that someone still calls future: the new digital world and new profession’s ways