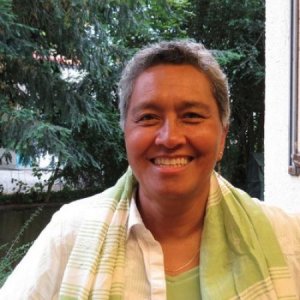 Dr. Margo Okazawa-Rey is currently on the faculty of the School of Leadership Studies at Fielding Graduate University in Santa Barbara, California. She is also Elihu Root Peach Fund Chair in Women’s Studies at Hamilton College in Clinton, NY and Professor Emerita at San Francisco State University.

Dr. Okazawa-Rey has held distinguished visiting positions at Mills College, Distinguished Fellow in Research Justice, 2013-2014 and Barbara Lee Distinguished Chair in Women’s Leadership from 2008-2009. She was also the Feminist Activist Scholar in Residence at Scripps College (2006) and the Jane Watson Irwin Co-Chair in Women’s Studies at Hamilton College (1999-2001).

She is the author of numerous publications. Her chapter, “Critical Ethnic Studies and Gender Studies: Education for Justice, Transformation, and Progressive Social Change,” appears in The Race Controversy in American Education (2015). An article published in Asian Journal of Women Studies, “Amerasian Children of GI Town: A Legacy of US Militarism in South Korea,” was among the first research articles that discussed the situation of mixed-race children abandoned by US military fathers in South Korea. Women’s Lives: Multicultural Perspectives (6th ed., 2013) co-edited with Gwyn Kirk (former Irwin Co-Chair), is an intro to women’s studies textbook used widely across the US, and, with Julia Sudbury, Activist Scholarship: Anti-racism, Feminism, and Social Change (2009) has influenced thinking about the relationship between research and activism among scholars. She also co-authored, with Amina Mama, “Militarism, Conflict and Women's Activism in the Global Era: Challenges and Prospects for Women in Three West African Contexts,” published in the Feminist Review (2011).

Dr. Okazawa-Rey sits on the international boards of the NGOs PeaceWomen across the Globe, based in Bern Switzerland, and Du Re Bang (My Sister’s Place) in Uijongbu, South Korea. She was a founding member of the Combahee River Collective, who articulated a theory of intersectionality in “A Black Feminist Statement."

Theories and Practices of Social Change

(2001) National Endowment for the Humanities/Jack Gray Chair, University of Hartford

Teach In to Act Out: Campus & Community Activism & The Corporate University

Militarism, Conflict, and Women’s Activism in the Global Era: Challenges and Prospects for Women in Three West African Countries

(2012) This article develops a feminist perspective on militarism in Africa, drawing examples from the Nigerian, Sierra Leonean and Liberian civil wars spanning several decades to examine women's participation in the conflict, their survival and livelihood strategies, and their activism.

(2008) Feminist Africa is a continental gender studies journal produced by the community of feminist scholars. It provides a platform for intellectual and activist research, dialogue and strategy. Feminist Africa attends to the complex and diverse dynamics of creativity and resistance that have emerged in postcolonial Africa, and the manner in which these are shaped by the shifting global geopolitical configurations of power. Co-editor Amina Mama, African Gender Institute, University of the Cape Town.

Network of Educators on the Americas

(1998) Multicultural education must encourage academic excellence that embraces critical skills for progressive social change. This book is guided by the philosophy of critical pedagogy, pioneered by Brazilian educator, Paulo Freire.