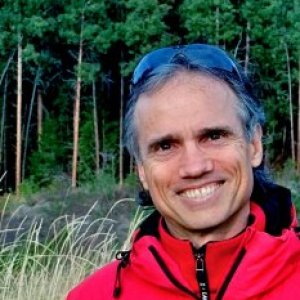 
I am a passionate, energetic person who recognizes that life is short, but wide

Dr. Holder earned his Ph.D. at the University of California at Berkeley. He then completed his postdoctoral training at the Brain Research Institute at UCLA where he conducted brain transplants to reverse impairments caused by brain injuries. As a professor at Memorial University of Newfoundland, he studied how natural chemicals, 200 times the strength of heroin, were released when people ate chocolate chip cookies. During this time he worked as a Biological Consultant with the NutraSweet Company to determine whether aspartame is safe for pregnant mothers and their offspring. He also spent a research sabbatical at the University of Hawaii swimming with dolphins in studies of their language and creativity.

Dr. Holder is now an Associate Professor at the University of British Columbia where he studies the science of happiness. He leads a research team that is identifying factors that contribute to happiness in children (e.g., temperament, social relationships, spirituality and religion) in Canada, India and Zambia. His team is also investigating strategies to enhance happiness in adults, and the links between personality disorders (e.g., psychopathy) and happiness.

Dr. Holder is an award winning teacher and researcher. He regularly gives keynote addresses and workshops on happiness in the workplace and in one’s personal life. Recently he has given presentations to the Conference Board of Canada, B.C. Provincial Government, Huntington’s Disease Society, B.C. Nurses Union, Multiple Sclerosis of Canada, and school districts. His research has often been featured in the media including The Globe and Mail, USA Today, The National Post, U.S. News and World Report, MSNBC and The Washington Times. He regularly appears on television and radio and recently published two books on positive well-being including “Happiness in Children”.

Assessed the safety of aspartame

Published research on communication in dolphins

Identified the relationship between spirituality and happiness in children

Studied the impact of marijuana use on happiness

The Science of Happiness and Health

Annual General Meeting for the Multiple Sclerosis Society of Canada  Vancouver, BC

An Evening with Margaret Trudeau  Kelowna, BC

Sponsored by Interior savings  Kelowna, BC

The “Positive” Future of Psychology

The Future of Psychology Conference 2012  Nanaimo, BC

The Science of Happiness: Creating Well-Being

The Science of Creating Happiness: Health is More than the Absence of Disease

Happiness in the Workplace and in Life

How and Why to Keep Employees Happy and Productive

The New Economics of Workplace Health and Well-Being; Conference Board of Canada   Calgary, AB

Science has placed a new focus on positive psychology including happiness. Join Dr. Mark Holder as he outlines his research, and the research of his colleagues, on what contributes to long-term happiness. Learn how happiness is associated with improvements in your immune functioning, social relationships, sleep, cognitive flexibility, longevity, tolerance, creativity, and career. Share a laugh while learning scientifically proven methods to increase your happiness and the happiness of your fri