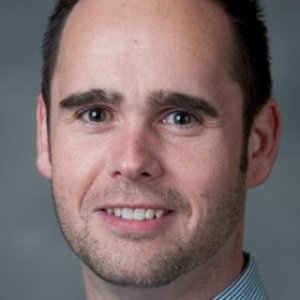 
Mark Kurt is an Associate Professor of Economics at Elon University.

Mark Kurt is an associate professor of economics at Elon University. His areas of expertise include labor economics, health economics, macroeconomics and international education.

Dr. Kurt joined the Elon faculty in 2008 as an assistant professor of economics and was named associate professor in 2014. He also serves as the director of the Love School of Business's Dual-Degree Program.

But just as important to an economic recovery is the “discouraged worker effect,” which refers to the factors that lead some unemployed workers to give up their searches altogether, say Mark Kurt, assistant professor of economics, and Steve DeLoach, professor of economics, both of Elon University’s Love School of Business in North Carolina...

Negbenebor noted that the month-to-month jobless rate can bob up and down, but the prevailing trend is that the economy is slowly and steadily improving. Although the state unemployment rate has barely improved from 9.5 percent in February 2012, the state's non-farm workforce of 4 million grew by 81,000 workers in the past year, Elon University economist Mark Kurt said...

"While the overall employment picture looks like it deteriorated, when you drill down a little bit there's some good signs," said Mark Kurt, economics professor at Elon University...

Discouraging Workers: Estimating the Impact of Macroeconomic Shocks on Search Intensity of the Unemployed

On the Job Search and the Business Cycle

Discouraging Workers: Estimating the Impact of Macroeconomic Shocks on Search Intensity of the Unemployed

Directed Search as a Mechanism to Prevent HIV Transmission

Business schools have long sought to increase students’ global awareness. Short-term study abroad (STSA) experiences are becoming increasingly popular ways of generating awareness. While a handful of studies have found evidence of efficacy, none have specifically tested how courses with business content differ from other STSAs. Using a longitudinal data set, we find that all courses, regardless of content, increase students’ general awareness, awareness of global interdependence, and language exposure. However, for students with lower levels of global awareness to start with, business programs appear to be more effective in imparting awareness of global interdependence than nonbusiness programs.

Academic study abroad programs are uniquely equipped to give students the opportunities to achieve outcomes for global citizenship (Langran, Langran, and Ozment 2009). These programs take students outside the confines of their home institutions and expose students to new cultures and languages while integrating academic content to enhance the learning experience. Due to this sharpening focus on global citizenship, the increase in participation in study abroad programs is unsurprising. In the 2009-2010 academic year, over 270,000 U.S. undergraduates chose to study outside the U.S., an increase of 88% over the past 10 years (Chow and Villarreal 2011). Of these students, more than 153,000 participated in a short-term study abroad (STSA) program (Chow and Villarreal 2011). The present study furthers general understanding of the relationship between STSA and changes in students' levels of global awareness. Students enrolled in an STSA sequence consisting of a one-credit hour preparatory course and a four-credit hour study abroad experience, are surveyed at three distinct points: prior to receiving any instruction, after a one-credit hour preparatory course but prior to the four-credit hour study abroad course, and upon return to the home institution at the conclusion of the STSA experience. The authors perform exploratory factor analysis on the individual survey items and generate five uncorrelated factors: general global awareness, functional knowledge, foreign media exposure, communication and culture, and foreign language exposure. Their results indicate that students' levels of global awareness are significantly larger after the STSA program in three of the five factors: general global awareness, functional knowledge, and foreign media exposure compared both to the initial sample and to the sample taken after the one-hour preparatory course. However, levels of global awareness do not increase uniformly over the sequence; for a vast majority of the survey items and factors, participation in the one-hour preparatory course has no significant effect on students' global awareness.

Discouraging workers: Estimating the impacts of macroeconomic shocks on the search intensity of the unemployed Journal of Labor Research

Discouraged and marginally attached workers have received increasing attention from policy makers over the past several years. Through slackness in the labor market, periods of high unemployment should reduce the likelihood of receiving a job offer and thus create more discouraged workers. However, the existing literature generally fails to find evidence of such pro-cyclicality in search intensity. Surprisingly, search appears to be acyclical. We hypothesize the observed acyclicality may be the result of coarse measurement of search intensity in previous studies and the failure to account for changes in individuals’ wealth across the business cycle. In this paper we use daily time use dairies from the American Time Use Survey 2003–2011 to examine the cyclicality of search intensity to explain this apparent contradiction between theory and data. Results indicate that workers do reduce their search in response to deteriorating labor market conditions, but these effects appear to be offset by the positive effects on search that are correlated with declines in household wealth.

Essays on the inter-industry wage differential, human capital, and directed search The University of Iowa

In this dissertation, I examine multiple theories for the existence and persistence of the inter-industry wage differential (IWD). Chapter 1 explores the possibility in which newly observed human capital explains differences in wages. Chapter 2 estimates a directed search model to determine the model's ability to provide a theory for wage dispersion across industries. Chapter 3 extends and calibrates the directed search model to the US economy to evaluate the model's results.

Previous research has pointed to the importance of heterogeneity in human capital in explaining the inter-industry wage differential. Most empirical work incorporates relatively coarse measures of human capital such as age or years of school. Here, I use a unique data set, the Baccalaureate and Beyond, to develop a more comprehensive measure of human capital. The results show that when adding variables that proxy for ability (SAT and GPA) as well as college major, prior degrees, coursework, institution type, and job match variables a reduction is seen in the impact of industry type on wages. The inter-industry wage differential is not reduced beyond what can be achieved by simple controls for occupation. Two interesting features arise. First, an increase IWD occurs early in the earnings profile. Second, workers who maintain employment in an industry experience an IWD as much as three times larger than those who switch industries over the duration of the study.