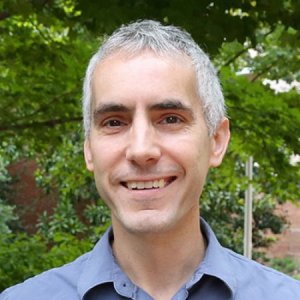 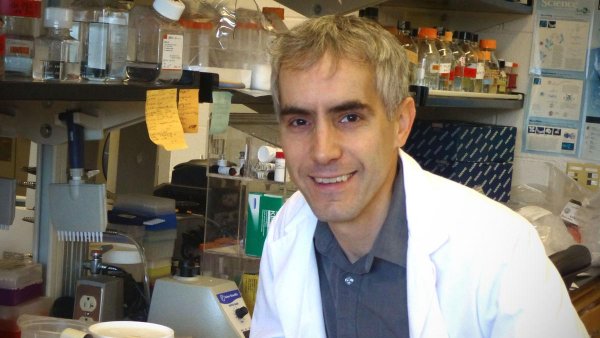 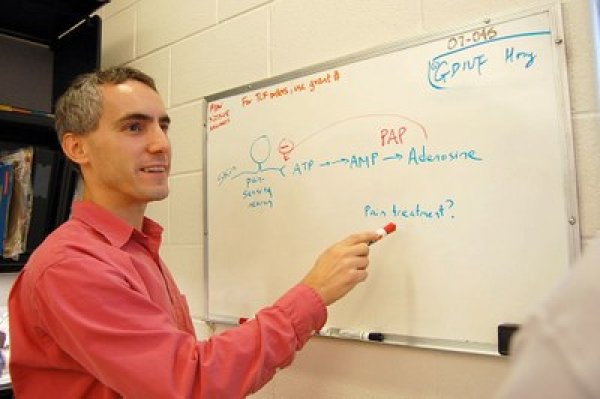 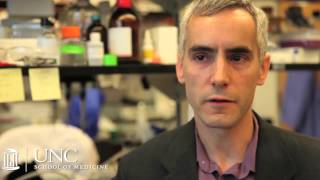 Dr. Zylka received his B.S. in Biochemistry from Virginia Tech, spent three summers at the NIH as an IRTA student in Dr. David Klein’s lab and then completed his Ph.D. in Neurobiology from Harvard. While in graduate school with Dr. Steven Reppert, he identified several of the core circadian “clock” genes and determined at a mechanistic level how these genes contribute to circadian rhythms in mammals. He then did his postdoctoral work at Caltech in Dr. David Anderson’s laboratory. While at Caltech, Dr. Zylka co-discovered a large family of G protein-coupled receptors called Mrgprs that are exclusively found in sensory neurons of rodents and humans. These receptors are now being studied as therapeutic targets for pain and itch. Half of Dr. Zylka’s lab at UNC is focused on identifying and studying a number of new molecules for the treatment of chronic pain. As examples, his lab found that Prostatic acid phosphatase (PAP) and ecto-5’-nucleotidase (NT5E, CD73) were expressed in pain-sensing neurons and function outside the cell to rapidly generate adenosine from AMP. His lab also found that purified versions of PAP and NT5E have potent and long-lasting antinociceptive effects in animal models of chronic pain. These antinociceptive effects are entirely due to activation of adenosine receptors. Future studies are aimed at using recombinant PAP protein and adenosine receptor agonists as analgesics, as well as to validate several other molecular targets for the treatment of chronic pain. Lastly, Dr. Zylka, in collaboration with Drs. Ben Philpot and Bryan Roth, found that topoisomerase inhibitors epigenetically unsilence Ube3a—a gene that is mutated in Angelman syndrome. Dr. Zylka’s research has expanded to include a heavy focus on autism and neurodevelopmental disorders, including the identification of what could be a unifying transcriptional mechanism for autism. Dr. Zylka's lab is also using transcriptional approaches to identify chemical risk factors for autism and other brain disorders.

The Pioneer Award program supports individual scientists of exceptional creativity who propose pioneering and highly innovative approaches with the potential to produce an unusually high impact on biomedical or behavioral research.

Each of those mutations is a clue to solving the mystery of autism. But it’s probably not the case that each mutation causes autism in its own unique way, said Mark Zylka, a professor at the UNC School of Medicine. More likely, he said, these mutations actually represent a smaller number of autism “pathways.” Zylka and his team at UNC believe they have figured out the rough outlines of one such pathway, from the tiny genetic glitch on the gene to the physical changes that the glitch causes in the brain. Like many discoveries, it piggybacked on the work of others, involved a little luck and has raised more questions for researchers...

Another leap in UNC autism research

Postdoctoral fellow Jason Yi researched the genetic cause for the enzyme with a team led by Mark Zylka, an associate professor of cell biology and physiology. The enzyme, called UBE3A, showed up after researchers analyzed DNA from a child with autism and compared it with DNA from the child’s parents, who don’t have autism...

"Our findings suggest that abnormal elevation of UBE3A activity, caused by the T485A missense mutation, contributes to autism pathology in an individual," Mark Zylka, PhD, of the UNC Neuroscience Center at the University of North Carolina at Chapel Hill, N.C., and colleagues reported in Cell...

UNC Scientists Find A Single Mutation Can Cause Autism

UNC associate professor Mark Zylka, Ph.D. and postdoctoral fellow Jason Yi, Ph.D., discovered an enzyme called UBE3A can be switched off when a phosphate is tacked onto it. In normal brain development, this enzyme can be turned on and off but this switch is blocked by the gene mutation in people with autism. "UBE3A is a protein that targets other proteins for destruction, so it’s like putting a flag on garbage that somebody else will pick up and throw away,” Zylka said. “We found the mutation hyperactivates the enzyme so it can’t be turned on or off, so it's constantly tagging proteins and things are being destroyed throughout the neuron."...

The discovery, which includes reducing the level of a target enzyme to ultimately decrease pain, could lead to new therapies for conditions such as arthritis, shingles and back pain, with much further testing. "The drug doesn't work when delivered orally, so it's far away from use for humans," said Mark Zylka, an associate professor of cell biology and physiology at UNC who led the research team...

2015 SUMMARY: Deletion of UBE3A causes the neurodevelopmental disorder Angelman syndrome (AS), while duplication or triplication of UBE3A is linked to autism. These genetic findings suggest that the ubiquitin ligase activity of UBE3A must be tightly maintained to promote normal brain development. Here, we found that protein kinase A (PKA) phosphorylates UBE3A in a region outside of the catalytic domain at residue T485 and inhibits UBE3A activity toward itself and other substrates...

2015 A study finds that pain hypersensitivity in male and female mice is differentially dependent on microglia and T cells, and describes a sex-specific response to microglia-targeted pain treatments. This sex difference will be important to consider when developing treatments for pain and other neurological disorders involving microglia and immune cells...

2015 A recent study by Gabel et al. (2015) found that Mecp2, the gene mutated in Rett syndrome, represses long (> 100 kb) genes associated with neuronal physiology and connectivity by binding to methylated CA sites in DNA. This study adds to a growing body of literature implicating gene length and transcriptional mechanisms in neurodevelopmental and neurodegenerative disorders...

2015 ABSTRACT: Existing analgesics are not efficacious in treating all patients with chronic pain and have harmful side effects when used long term. A deeper understanding of pain signaling and sensitization could lead to the development of more efficacious analgesics...