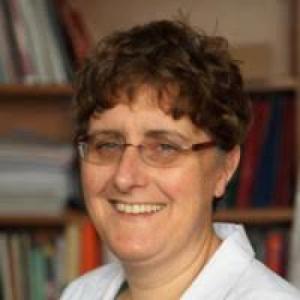 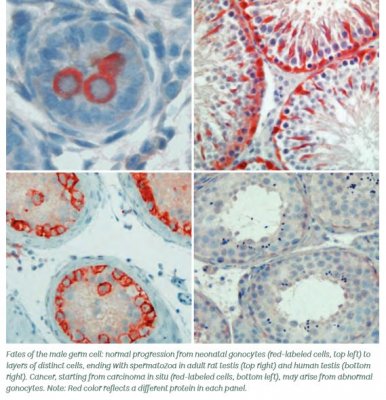 My research focuses on identifying the mechanisms controlling the proliferation and differentiation of neonatal gonocytes, precursors of male germline stem cells, and the effects of environmental chemicals on testis development. Perturbation of gonocyte development can result in infertility or testicular tumors. Because testis development is dependent on sex hormones, it is very sensitive to chemicals that interfere with androgen and estrogen homeostasis and action. My group has identified molecules and pathways involved in the regulation of gonocyte development, including elements of the ubiquitin proteasome system, which are under investigation. In utero exposure of rats to endocrine disruptors, including estrogenic compounds and the plasticizer DEHP, have unveiled short and long term testicular targets that are the object of current studies. These studies will help understanding early phases of spermatogenesis and better assess the risk posed by endocrine disruptors to the reproductive system.

Martine Culty, PhD, who has joined the USC School of Pharmacy as an associate professor, has been affectionately called “Madame Gonocyte.” She may not have originated the term for these germ cells that serve as the precursor to sperm formation, but if you Google “gonocyte,” her name appears near the top and in numerous entries.

The Culty lab has two main research interests: 1) identifying the mechanisms controlling the development of gonocytes, precursors of male germline stem cells and 2) determining the effects of environmental chemical mixtures on testis development and function. Perturbation of gonocyte development can result in infertility or testicular tumor. Thus, our first goal is to identify factors and signaling pathways involved in gonocyte proliferation and differentiation, in order to unveil new targets of testicular cancer treatment. This model can also be used to test drug effects on neonatal germ cells. Because testis development is dependent on sex hormones, it is very sensitive to chemicals interfering with androgen and estrogen homeostasis and action. Our second goal is to determine the impact of fetal exposure to common endocrine disruptor mixtures, at doses relevant to human exposure, on testicular development and function across the lifespan, using the rat model. These studies will aid better assessing endocrine disruptor risks to the reproductive system. Our studies involve a variety of molecular, cellular, pharmacological and toxicological approaches, applied on in vivo animal models, primary cells, cell lines and human tissues specimen.

Peripheral-type benzodiazepine receptor: a tool for detection, diagnosis, prognosis, and treatment of cancer

1998 The expression and subcellular localization of peripheral-type benzodiazepine receptors (PBR) is shown in this application to correlate with the metastatic potential of cells, and increased cell proliferation. Inhibition of PBR expression, function or stability results in a decrease in cell proliferation. Compositions and methods for regulating and/or monitoring PBR and its expression are useful for the detection, diagnosis, prognosis and treatment of solid tumors, in particular, breast cancer.

2018 In mammals, two distinct populations of Leydig cells have been identified: fetal Leydig cells (FLCs) and adult Leydig cells (ALCs). These cells appear sequentially from development through adulthood, with the appearance of FLCs preceding that of ALCs (Fig. 1). The high levels of androgens produced by the fetal testis are required for the proper development of the male reproductive system, brain masculinization, and the expression of key enzyme activities later in life. In the rat, testosterone production declines with the loss of the FLCs, reaching a nadir at 2–4 weeks postpartum, and then gradually increases to high levels with the development of ALCs from Leydig stem cells present in the neonatal testis (Fig. 2). Once formed, the ALCs rarely divide or die. With aging, there is a progressive decline in testosterone production by ALCs, resulting in reduced serum testosterone levels. Androgens are involved in many systems in the male in addition to reproduction, including cardiovascular, skeletal, and muscular. Consequently, it is critical to understand the regulation of Leydig cell formation and the causes and consequences of their aging.

2017' Spermatogenesis consists of a series of highly regulated processes that include mitotic proliferation, meiosis and cellular remodeling. Although alterations in gene expression are well known to modulate spermatogenesis, posttranscriptional mechanisms are less well defined. The ubiquitin proteasome system plays a significant role in protein turnover and may be involved in these posttranscriptional mechanisms. We previously identified ubiquitin ligase Huwe1 in the testis and showed that it can ubiquitinate histones. Since modulation of histones is important at many steps in spermatogenesis, we performed a complete characterization of the functions of Huwe1 in this process by examining the effects of its inactivation in the differentiating spermatogonia, spermatocytes and spermatids. Inactivation of Huwe1 in differentiating spermatogonia led to their depletion and formation of fewer pre-leptotene spermatocytes. The cell degeneration was associated with an accumulation of DNA damage response protein γH2AX, impaired downstream signalling and apoptosis. Inactivation of Huwe1 in spermatocytes indicated that Huwe1 is not essential for meiosis and spermiogenesis, but can result in accumulation of γH2AX. Collectively, these results provide a comprehensive survey of the functions of Huwe1 in spermatogenesis and reveal Huwe1's critical role as a modulator of the DNA damage response pathway in the earliest steps of spermatogonial differentiation.

2017 Spermatogenesis is sustained by a heterogeneous population of spermatogonia that includes the spermatogonial stem cells. However, the mechanisms underlying their establishment from gonocyte embryonic precursors and their maintenance thereafter remain largely unknown. In this study, we report that inactivation of the ubiquitin ligase Huwe1 in male germ cells in mice led to the degeneration of spermatogonia in neonates and resulted in a Sertoli cell-only phenotype in the adult. Huwe1 knockout gonocytes showed a decrease in mitotic re-entry, which inhibited their transition to spermatogonia. Inactivation of Huwe1 in primary spermatogonial culture or the C18-4 cell line resulted in cell degeneration. Degeneration of Huwe1 knockout spermatogonia was associated with an increased level of histone H2AX and an elevated DNA damage response that led to apparent mitotic catastrophe but not apoptosis or senescence. Blocking this increase in H2AX prevented the degeneration of Huwe1-depleted cells. Taken together, these results reveal a previously undefined role of Huwe1 in orchestrating the physiological DNA damage response in the male germline that contributes to the establishment and maintenance of spermatogonia.

2017 Di(2-ethylhexyl) phthalate (DEHP) and other phthalates are ubiquitous environmental contaminants with endocrine disrupting properties. Two novel plasticizers, 1,4 butanediol dibenzoate (BDB) and dioctyl succinate (DOS), have been proposed as potential replacements. Both have desirable properties as plasticizers and minimal in vitro biological effects. Herein, we present an in utero and lactational exposure study comparing DEHP with BDB, DOS, and 1,2-cyclohexane dicarboxylic acid diisononyl ester (DINCH), a commercial alternative. Timed-pregnant Sprague-Dawley rats were gavaged with vehicle or one of these chemicals at 30 or 300 mg/kg/day from gestational day 8 until postnatal day (PND) 21. The offspring were examined for effects on developmental and endocrine markers until PND 46. DEHP treatment (300 mg/kg) decreased heart weights in dams and induced a significant decrease in anogenital index and an increase in hemorrhagic testes and multinucleated gonocytes in PND 3 male pups. An increase in the incidence of hemorrhagic testes was also observed on PND 8 after exposure to DINCH (30 and 300 mg/kg). The only other effects observed were decreases in serum alanine transaminase and magnesium in BDB 30 exposed dams. These data suggest that both BDB and DOS are viable alternative plasticizers.

2016 Plasticizers are indispensable additives providing flexibility and malleability to plastics. Among them, several phthalates, including di (2-ethylhexyl) phthalate (DEHP), have emerged as endocrine disruptors, leading to their restriction in consumer products and creating a need for new, safer plasticizers. The goal of this project was to use in vitro functional screening tools to select novel non-toxic plasticizers suitable for further in vivo evaluation. A panel of novel compounds with satisfactory plasticizer properties and biodegradability were tested, along with several commercial plasticizers, such as diisononyl-cyclohexane-1,2-dicarboxylate (DINCH®). MEHP, the monoester metabolite of DEHP was also included as reference compound. Because phthalates target mainly testicular function, including androgen production and spermatogenesis, we used the mouse MA-10 Leydig and C18-4 spermatogonial cell lines as surrogates to examine cell survival, proliferation, steroidogenesis and mitochondrial integrity. The most promising compounds were further assessed on organ cultures of rat fetal and neonatal testes, corresponding to sensitive developmental windows. Dose-response studies revealed the toxicity of most maleates and fumarates, while identifying several dibenzoate and succinate plasticizers as innocuous on Leydig and germ cells. Interestingly, DINCH®, a plasticizer marketed as a safe alternative to phthalates, exerted a biphasic effect on steroid production in MA-10 and fetal Leydig cells. MEHP was the only plasticizer inducing the formation of multinucleated germ cells (MNG) in organ culture. Overall, organ cultures corroborated the cell line data, identifying one dibenzoate and one succinate as the most promising candidates. The adoption of such collaborative approaches for developing new chemicals should help prevent the development of compounds potentially harmful to human health.