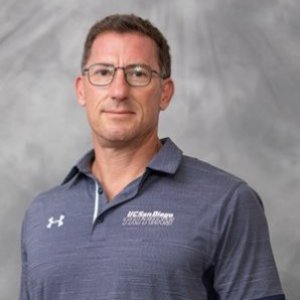 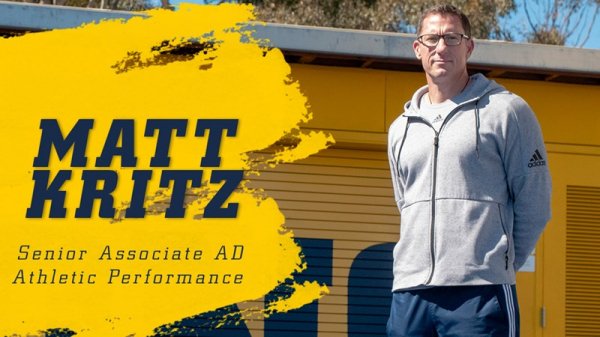 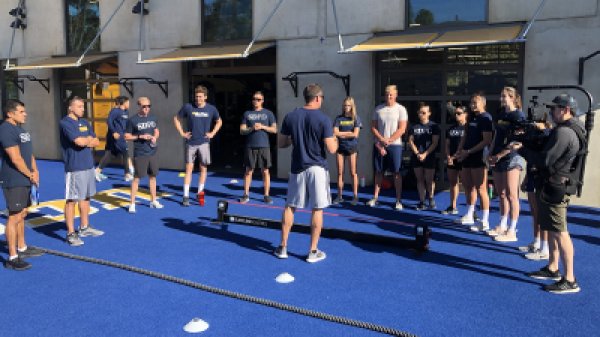 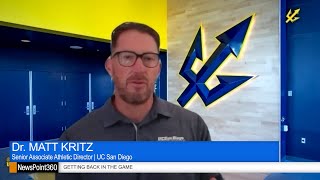 Previously, Kritz served in a consulting role for UC San Diego in athletic performance. Under his direction, the unit has expanded to provide Triton student-athletes with first-class support services related to strength and conditioning, nutrition, rehabilitation, sport psychology and injury prevention. In 2014, Kritz helped design and manage the opening of the Spanos Athletic Performance Center.

A 1996 graduate of Sacramento State, Kritz earned a Master of Science from United States Sports Academy in 2004. In 2012, he earned a doctoral degree in human movement from AUT University in New Zealand.

While with High Performance New Zealand, Kritz was an integral figure in a national sport initiative that yielded a 100 percent increase in Olympic medals won by New Zeland athletes from 2008-16. He assisted with the effort to secure a $40 million investment that led to six national sport training centers equipped with state-of-the-art biofeedback training and monitoring solutions.

Kritz led the growth and expansion of the country’s national strength and conditioning discipline from three to 36 full and part time staff members. He served as a national sport science lead for a variety of New Zealand’s sport athletes and programs, including women’s rugby 7’s, field hockey, netball, BMX and track and field.

Over the years, he has made numerous international presentations on sport science, has been published seven times and owns a patent on a world recognized movement competency screening tool designed to assist sport and health professionals to better understand an individual’s movement competency related to injury mechanics.

Care and Prevention of Athletic Injuries

39 Years And Counting In The Triton Family

“We have all seen it happen. This group and this season are the culmination of everything that we put together for these students. It included a total coaching staff effort. There is so much that goes behind the scenes and results in our success with [Associate Head Coach] Matt Ustaszewski, [volunteer Assistant Coach] Glenn Busch who was the goalie for UCSD’s last and only NCAA Finals appearance in 2000, [Operations Manager] Rob Patty, [Strength & Conditioning Coach] Matt Cox, [Director of Athletic Performance] Matt Kritz and [Athletics Trainer] Christian Ahlstrom who have prepared the team.

The Athlete Nation Movement Frame "Hero" is a apparatus designed to allow the user to attenuate bodyweight load within each of the seven fundamental movement patterns.

2014 Elastic bands are a form of variable resistance and a strength training modality commonly seen within a strength and conditioning training environment. They are considered an effective training tool due to the fact that the resistance aligns with the force capability of the musculature throughout the range of motion of many movement tasks.

2010 The use of the upper body in sport and sport -specific training is considerable. Strength and conditioning professionals design programs to improve the force and/or velocity capabilities of the upper-body musculature using exercises that can be categorized as either upper-body push or upper-body pull, given the patterns of movement they involve.

The Bodyweight Squat: A Movement Screen for the Squat Pattern

2009 The bilateral squat (squat) is one of the most prevalent exercises used in strength training world-wide. The popularity of the squat is certainly a reflection of its practicality.Humans throughout time have used variations of the squat pattern to accomplish various tasks associated with activities of daily living