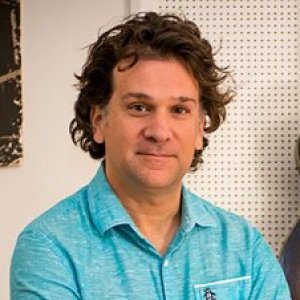 
Matt Sakakeeny studies the intersections of music, race and power. 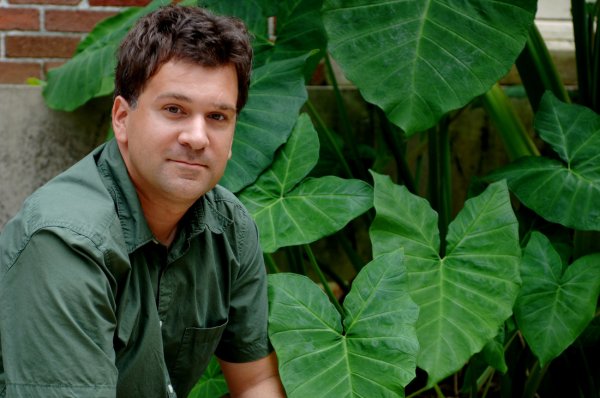 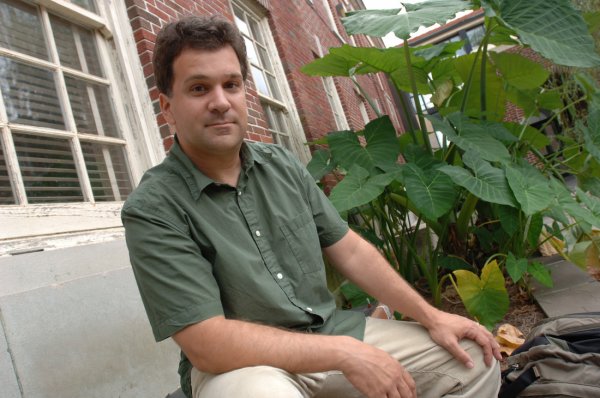 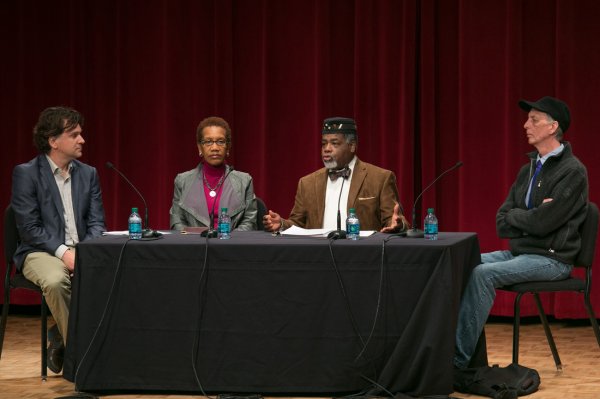 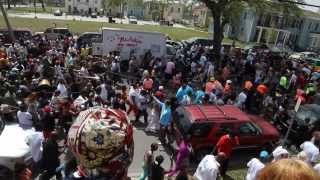 Matt Sakakeeny studies the intersections of music, race and power. He is the author of "Roll With It: Brass Bands in the Streets of New Orleans" (Duke Press, 2013) and articles in several edited collections and journals, including "Ethnomusicology, Black Music Research Journal, and Souls: A Critical Journal of Black Politics, Culture, and Society". He is also co-editor of "Keywords in Sound" (Duke Press, 2015) and his work consistently troubles the boundaries between music and sound.

Sakakeeny has received grants from the National Science Foundation, Awards to Louisiana Artists and Scholars and the New Orleans Center for the Gulf South, and awards from the Society for Ethnomusicology, the Popular Music Section of SEM and Tulane University’s Center for Public Service.

As part of his community-engaged research, Sakakeeny is a board member for Roots of Music and the Dinerral Shavers Educational Fund and has published in media outlets such as Oxford American and NPR’s All Things Considered. He is also the guitarist and bandleader of Los Po-Boy-Citos.

It takes more than 20 musicians and as many instruments to make the music inside Matt Sakakeeny's head. With 100,000 Starry Nights, his first-ever album of his own music as The Lonely Birds, the author and musicologist counts 21 performers: harpists, string players, horn players, singers, drummers, and Sakakeeny as guitarist, vocalist, songwriter and arranger for the lush orchestral score behind his genre-spanning rock 'n' roll.

Can You Tell a Lullaby From a Love Song? Find Out Now

The current study “is based on all kinds of presumptions” that ethnomusicologists would disagree with, said Matt Sakakeeny, associate professor of music at Tulane University in New Orleans. He said these included the ideas that you could remove songs from their social, political and cultural contexts, or draw conclusions from analyzing just a handful of lullabies. Professor Sakakeeny sang the pop song “Hey, Baby” to his daughter as a lullaby, he added — how would the scientists deal with that? “My suspicion is they’d dismiss it as statistically irrelevant because it’s not a lullaby, and to me that’s fundamentally the problem.” More collaboration between scientists and ethnomusicologists was needed, he added...

"The worry is, people think the story has ended," said Matt Sakakeeny, associate professor of music at Tulane and author of "Roll With It: Brass Bands in the Streets of New Orleans." ''But I think the New Orleans music scene now is maybe as vital as maybe it ever has been." Among those he's watching is Christian Scott, a trumpeter who changed his name to aTunde Adjuah. "He has a unique sound -- he calls it Stretch Music," Sakakeeny said. "He collaborates with musicians not just from New Orleans but from all over the world."

Flag Boys of the Nation

In a profile of Ronnel Butler, the Redhawk Hunters’ Flag Boy, Tulane ethno-musicologist Matt Sakakeeny writes: “It takes a steady hand to be a barber and to be a Flag Boy. Ronnel’s personality is perfectly suited to the position. He is always paying attention and nothing seems to faze him. If the job of the Spy Noy or the Wild Man is to cause commotion, the job of the Flag Boy is to stay clam and alert, to hold tight by the Big Chief and to decide who gets through to him and who does not. He says that, ‘basically, I’m the security guard.’”

Tulane music professor Matt Sakakeeny, who recently published "Roll With It: Brass Bands in the Streets of New Orleans," reposted the below video from YouTube user metamorph68 on Facebook, Sunday, after the parade. "Rebirth Brass Band keeps threatening to retire from the streets, so no one was surprised when they weren't at today's second line parade for their friends in the Treme Sidewalk Steppers club," Sakakeeny wrote.

Matt Sakakeeny, guitarist and bandleader of the New Orleans Latin fusion band Los Po-Boy-Citos, is an assistant professor in Tulane University’s department of music, with an Ivy League Ph.D. in ethnomusicology, a Tulane master’s in musicology and, preceding both, a conservatory degree in classical guitar performance and sound recording. He’s published extensively in journals with titles like “Contemporary Political Theory” and “Current Musicology,” and has a book – “Instruments of Power: Brass Bands in the Streets of New Orleans” – coming out soon, with the estimable Duke University Press. Even a quick glance at his curriculum vitae would seem to indicate that when it comes to music, Dr. Sakakeeny is a very serious man indeed.

Playing for Work: Music as a Form of Labor in New Orleans

2015 New Orleans is ideal to study music as a form of labor, because live musical performance is critical to its overall economic infrastructure. After the devastation of Hurricane Katrina in 2005, the reliance on the return of displaced culture bearers to facilitate recovery exposed the inner workings of the cultural economy and highlighted long-standing patterns of exploitation that are endemic to black musicians, the culture industry, and global capitalism. This case study, based on years of ethnographic study among black brass band musicians in New Orleans, offers a view of broader issues of heritage tourism, commodification and authenticity, festivalization and exhibition, racial appropriation, and the value of economic and social capital. The author’s observation of musicians provides a foundation for reevaluating live musical performance as a form of labor, extending a large body of literature on the political economy of music with emphasis on the monetary economy of musicians.

Souls: A Critical Journal of Black Politics, Culture, and Society

2015 In New Orleans, musicians in school marching bands are more popular than athletes, and spectators marvel at the choreography and musicianship on display in Mardi Gras parades and sporting events. Lessons imparted in the bandroom not only prepare a select few with the tools to pursue a career in music, they offer all students “culturally sustaining pedagogies” unavailable in core curriculum classes. But in prioritizing high-stakes testing, racialized “career readiness” schools have relegated arts education further to the periphery, denying young people an opportunity to socialize themselves as black subjects in ways that they find meaningful and valuable.

2015 What is it like to live in a laboratory? To experience the mundanities of finding housing, placing kids in school, getting a job, navigating by car or bus or streetcar – even the most fundamental act of eating food – as part of a grand experiment. It is surreal, I can tell you, and like so many things in this city’s 300-year history, it is unparalleled. In just ten of those years, New Orleans has managed to reinvent itself so quickly and so broadly that comparisons to other cities seem to fail us. How could Landrieu’s hometown become a “new government model that’s emblematic of what the rest of the country should be doing,” as he would wish, when this model is based on devastation (80% of homes destroyed), relocation (90,000 African Americans residents still unreturned), an influx of new residents (approximately 30,000, mostly white) and recovery funds ($71 billion in federal support alone)?

2011 This essay provides a roughly chronological history of a single musical tradition in New Orleans, the brass band parade, as a case study that supports a more expansive proposition. The first half of this proposition is specific to New Orleans: I note that the city has become largely identified with African American musical practices and repertoires and, further, that the associations between music, race, and place can be adequately subsumed under the categorical term New Orleans Music.

“Under the Bridge”: An Orientation to Soundscapes in New Orleans

2010 This article from the journal *Ethnomusicology* is about jazz funerals and second line parades in the Treme neighborhood of New Orleans after Hurricane Katrina, and includes discussions with members of the Rebirth Brass Band.

“Under the Bridge”: An Orientation to Soundscapes in New Orleans

2010 In November 2006, I marched with 100 or so people in the funeral procession for Adrienne Shorty Chancley, who died at age 32 in her hometown of New Orleans. She was, as the expression goes, "burried with music"; honored through a tradition that dates back at least to Emancipation in the late nineteenth century. In this tradition, commonly called a jazz funeral, mourners march from the funeral service to the burial site with their movement regulated by the beat of a brass band.