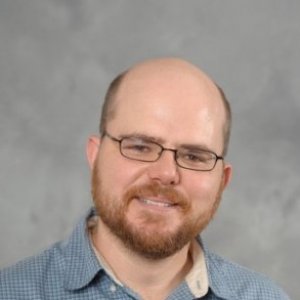 
An expert in Cultural, Biological and chemical pest management for organic production systems 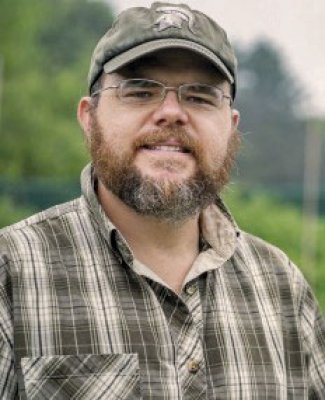 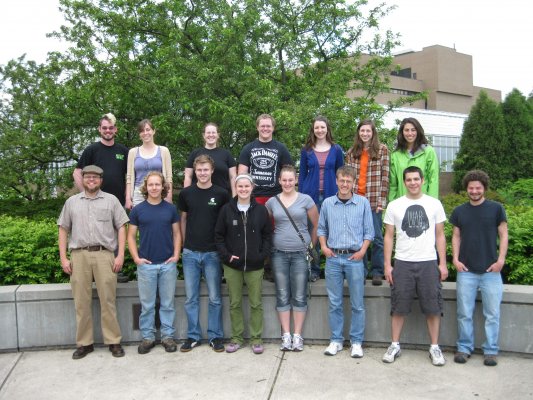 The biggest impacts of my research has been in the areas of integration of livestock in apple production (4-5 farms have adopted this practice in the Upper Midwest) and improvement of the application and refinement of on-site and open rearing biological control systems in greenhouses (Numerous greenhouses in the Kalamazoo area have increased their use of these systems since my lab's involvement).

Foreign wasp could be recruited for bug battle

Some people try physical fixes like filling in holes in the house, or spraying pesticides around the property. Unfortunately, the insect is well equipped to handle both of these solutions, said Matthew Grieshop, another entomology professor at Michigan State. [...]

Matthew Grieshop, Ph.D., associate professor of entomology, and his colleagues at MSU looked at the effects of removing fallen fruit on D. suzukii breeding patterns. By removing potential breeding sites such as fallen fruit, the research suggests, population levels of the fly could be reduced. Their study, “Evaluation of Off-season Potential Breeding Sources for Spotted Wing Drosophila (Drosophila suzukii Matsumara) in Michigan,” is believed to be one of the first to evaluate whether removing fruit wastes could reduce breeding flies. Their study was published last week in the Journal of Economic Entomology. [...]

Multistate Comparison of Attractants and the Impact of Fruit Development Stage on Trapping Drosophila suzukii (Diptera: Drosophilidae) in Raspberry and Blueberry

2018 Spotted-wing drosophila, Drosophila suzukii Matsumura (Diptera: Drosophilidae), is an invasive pest of soft-skinned fruits across the globe. Effective monitoring is necessary to manage this pest, but suitable attractants are still being identified. In this study, we combined lures with fermenting liquid baits to improve D. suzukii trapping specificity and attractiveness. We also measured the efficiency and specificity of baits/lures during different times of the season; the reproductive status of females among baits/lures; and the effects of locations and crop type on these response variables. We developed a metric that combined mating status and fat content to determine differences in types of females attracted. Lures utilizing yeast and sugar-based volatiles trapped the most D. suzukii. The addition of a commercial lure to yeast and sugar-based lures increased catches in most locations, but was also the least specific to D. suzukii. Apple juice-based chemical lures tended to be most specific to D. suzukii, while lures comprised of a singular attractant tended to trap more D. suzukii with a higher reproductive potential than combinations of attractants. Trap catch and lure specificity was lower during fruit development than fruit ripening. While catch amounts varied by geographic location and crop type, attractants performed similarly relative to each other in each location and crop. Based on the metrics in this study, the yeast and sugar-based attractants were the most effective lures. However, further work is needed to improve early season monitoring, elucidate the effects of physiological status on bait attraction, and understand how abiotic factors influence bait attraction.

2018 Drosophila suzukii Matsumura is a significant pest of soft‐skinned fruit. Larvae of D. suzukii develop within the fruit making it unmarketable as fresh berries and increasing the risk of rejection by processors. We evaluated selected biopesticides for control of D. suzukii in fall red raspberries, Rubus idaeus L. The trial results highlight a small number of biopesticides with the potential to reduce infestation of Drosophila larvae in raspberries. In addition to the standard biopesticide spinosad, we found that sabadilla alkaloids and Chromobacterium subtsugae both reduced the number of Drosophila larvae in raspberry fruit. Treatments that included corn syrup as a feeding stimulant showed no significant difference in their infestation levels compared to treatments without the syrup. In the final week of the 5‐week trial, treatments with rotations of either spinosad/C. subtsugae or spinosad/sabadilla alkaloids had a 67% and 57% reduction in infestation when compared to untreated raspberries. Treatments of spinosad alone on a 7 day rotation and C. subtsugae alone on a 3–5 day rotation both had a 62% and 61% reduction in larval infestation when compared to untreated raspberries. Third instar larvae, the largest and most damaging, were significantly reduced in plots treated with spinosad only, a rotation of spinosad/sabadilla alkaloids and the rotation of spinosad/C. subtsugae with corn syrup added when compared to untreated plots. This suggests that either of these biopesticides could be used as effective rotation partners along with spinosad for control of D. suzukii. Our results highlight that biopesticides can provide significant reduction in this devastating pest when used alone or in combination, providing options to support resistance management.

Big brother is watching: studying insect predation in the age of digital surveillance

2012 We describe a novel video system constructed from readily available security equipment for recording insect predator behavior in the field. Our system consists of a multi-channel digital video recorder (DVR), active night vision cameras, a deep cycle marine battery, and a weatherproof housing. The major advantages of these systems over previous generations of video equipment include reduced expense, improved deployment times, faster frames per second, and higher video resolution. We tested our systems in a pair of experiments: the first assessed the effects of ground cover on predation of key pests in blueberries, and the second investigated predator activity in corn and perennial prairie systems. We identified ants as the most frequent predators in all three ecosystems, with notable activity from arachnids, crickets, and mollusks. Interactions between coleopterans and prey were surprisingly infrequent in all three agroecosystems. Ants were observed under both day and night conditions, while other predators were primarily nocturnal. Ground covers did not significantly affect predator activity in blue-berries, but there was a numerical reduction in ant activity on woodchips and weed barrier compared to grass and bare ground. The predator complex observed in blueberry video footage differed considerably from pitfall captures at the same site. In corn fields, prey mortality significantly increased with ant activity, and high prey mortality was associated with long interactions that involved large numbers of ant foragers. Digital videography of insect predators is a very useful tool for identifying key taxa responsible for the removal of sentinel prey and documenting their behavior.

2010 Knowledge of how insects are actually affected by sex pheromones deployed throughout a crop so as to disrupt mating has lacked a mechanistic framework sufficient for guiding optimization of this environmentally friendly pest-control tactic. Major hypotheses are competitive attraction, desensitization, and camouflage. Working with codling moths, Cydia pomonella, in field cages millions of times larger than laboratory test tubes and at substrate concentrations trillions of times less than those typical for enzymes, we nevertheless demonstrate that mating disruption sufficiently parallels enzyme (ligand) –substrate interactions so as to justify adoption of conceptual and analytical tools of biochemical kinetics. By doing so, we prove that commercial dispensers of codling moth pheromone first competitively attract and then deactivate males probably for the remainder of a night. No evidence was found for camouflage. We generated and now validate simple algebraic equations for attraction and competitive attraction that will guide optimization and broaden implementation of behavioral manipulations of pests. This analysis system also offers a unique approach to quantifying animal foraging behaviors and could find applications across the natural and social sciences.

2005 The wheat stem sawfly, Cephus cinctus Norton, is a major insect pest in dryland wheat (Triticum L. spp.; Poaceae) fields in the northern Great Plains of the United States and in southern regions of the prairie provinces of Canada. Field infestations by this pest commonly show a distinct “edge effect”, with infestation levels highest at the field edge and declining inwards. In this study, we characterized the edge effect of C. cinctus infested wheat fields in Montana at four locations in two separate years. "Infestation level" refers to the average proportion of wheat stems infested with C. cinctus in samples collected in a given wheat field. The gradual decrease in C. cinctus infestation towards the centre of wheat fields is referred to as the “infestation slope”, and it was presented as a proportion of infestation level at field edges. We showed that (i) for most of the fields bordering grassland or fallow wheat, a simple exponential decline curve provided a significant fit to the infestation slope; (ii) the infestation slopes in different fields and in different directions within fields were similar and appeared to be independent of the overall infestation level; and (iii) the relationship between infestation level and the proportion of samples infested followed an asymptotic curve, which indicates a high level of dispersal of ovipositing C. cinctus females. The general perception has been that the edge effect of C. cinctus infestation is a result of ovipositing C. cinctus females being both weak flyers and short-lived, but our results do not fully corroborate this perception. Currently, the only reliable way to detect C. cinctus infestations is to dissect individual stems and look for developing instars. However, this type of sampling is extremely time consuming and labor intensive and therefore impractical for wheat growers. Increasing the understanding of the spatial patterns in C. cinctus infestations is a first step towards development of an optimal sampling plan for this important field pest. Thus, the results presented are relevant for researchers involved in sampling designs and integrated pest management procedures for field pests. We discuss behavioral and evolutionary factors that may contribute to the edge effect of C. cinctus infestations.