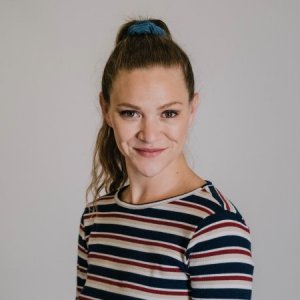 Maureen Gonzales, a Los Angeles based dancer, choreographer, and educator, received her Bachelor of Arts Degree in Dance Performance and Choreography from Columbia College Chicago. In 2016, she joined the part time faculty in the dance department at Loyola Marymount University. Given her eclectic training, Maureen’s movement classes focus heavily on mind body awareness, strength and alignment, and music and rhythm. She fortifies her passion for these concepts to the young dancers at Legacy Dance Academy, 8 Count Dance Academy and also to her yoga students at the Willows Community School.

Throughout her years in dance education, Maureen has taught many master classes, workshops, and intensives as well as co-directed nationally acclaimed Aspire Dance Hip Hop Company from 2007-2013. Momentum is her second Fall Faculty work for LMU; Here to There debuted at the Strub Theater fall of 2016. Maureen’s choreography demonstrates her diverse dance training and investigates relationship dynamics and their effect on movement. Her work has been seen at several venues in Chicago including her collaboration with Callie Frey with their work Contemplative Exchange in the 2013 D49 Choreographer’s Dance Festival. This performance awarded the duo commission from Chicago Moving Company to create a new work The Knot That Settles In.

Recently, she choreographed music videos Translucent, Send Medicine, and Crazy, MariGo. Among other collaborative projects the young choreographer also debuted her piece cornerstone at a local festival in Venice, CA. As a performer, Maureen appeared on NBC’s Playboy Club as a featured dancer under the direction of choreographer Fatima Robinson, danced with urban contemporary group Boom Crack! Dance Company, DiPr Dance Company, and works as a freelance dancer. Some choreographers she has worked with are Becca Lemme, Jennifer Archibald, Trae Turner and Michel Rodriguez.