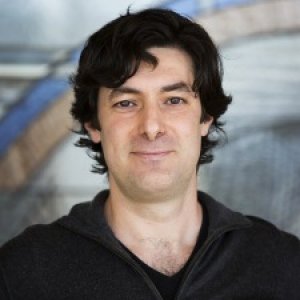 
Professor of Materials Science and Engineering University of Michigan

Organic devices having a fiber structure

A photoactive fiber is provided, as well as a method of fabricating such a fiber. The fiber has a conductive core including a first electrode. An organic layer surrounds and is electrically connected to the first electrode. A transparent second electrode surrounds and is electrically connected to the organic layer. Other layers, such as blocking layers or smoothing layers, may also be incorporated into the fiber. The fiber may be woven into a cloth.

The present invention relates to a method and apparatus for depositing material.

Method and apparatus for depositing material using a dynamic pressure

A method of manufacturing a fiber-based electric apparatus includes providing an elongate, flexible fiber core and layering an electric device on the fiber core.

A novel solar cell architecture consisting of multiple fiber-based photovoltaic (PV) cells. Each PV fiber element is designed to maximize the power conversion efficiency within a narrow band of the incident solar spectrum, while reflecting other spectral components through the use of optical microcavity effects and distributed Bragg reflector (DBR) coatings. Combining PV fibers with complementary absorption and reflection characteristics into volume-filling arrays produces an array of spectrally tuned solar cells with an effective dispersion element intrinsic to the architecture, resulting in high external quantum efficiency over the visible spectrum.

Scanning device with a probe having an organic material

Method and apparatus for depositing material with high resolution

A device is provided. The device includes a base, and a reservoir disposed in the base. The reservoir is defined by a cladding and the base, and has an opening with a largest dimension of about 200 nm or less, more preferably 100 nm or less, and most preferably 60 nm or less. A material may be disposed within the reservoir. The base may be attached to a position control apparatus that may control the position of the base with an accuracy on the order of nanometers. The position control apparatus may include an atomic force microsope and/or a near field scanning optical microscope. The base may also be coupled to an energy application apparatus that may apply energy to the material. The device may be used to deposit material onto a substrate with a very high resolution, on the order of a few molecules across. The device may also be used to remove material from a substrate with a very high resolution by transmitting energy through the base. A device used for such removal may or may not include a reservoir.

Methods of producing semiconductor materials via polymerization techniques are provided. The methods include reacting a precursor compound containing a metalloid semiconductor element, such as silicon or germanium, with a catalyst to form a polymer composition. The polymer precursor is then decomposed to form an electrically conductive hydrogenated composition containing silicon or germanium. The methods employ relatively safe raw materials and products and result in high yield reactions. Moreover, the polymers can be applied in liquid form and can be used as an “ink” or liquid to selectively coat a substrate.